The Syria war is proving to be a divisive, rather than unifying, force among the Kurds of Iraq and Syria. 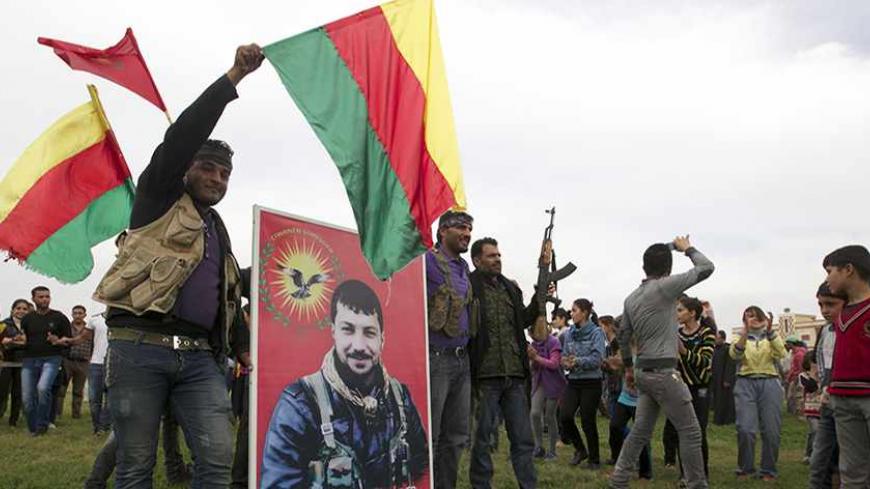 Residents and Kurdish fighters celebrate what they said was the liberation of their village from Islamist rebels near the city of Ras al-Ain, Nov. 5, 2013. - REUTERS

WASHINGTON — The Syrian civil war and the weakening of central states in the Middle East has resulted in a new power struggle among Kurdish parties over control of the Kurdish areas in Syria, instead of unifying them. The outcome is two different Kurdish autonomous zones in Syria and Iraq that compete with each other, based on different economic models.

The New York Times earlier suggested that it could be possible that as a result of the Arab Spring, a Syrian Kurdistan could break off from Syria and merge with the Kurdistan Region of Iraq in a breakdown of the Western-imposed Sykes-Picot borders of 1916.

The borders have divided the Kurds and this has created separate Kurdish parties focused either on Iran, Iraq, Syria, Turkey or all of them. Nevertheless, all of these Kurdish parties share the idea of a unified Kurdish identity, all the while facing different political systems and geographical realities.

The main Kurdish blocs in Syria are the Democratic Union Party (PYD) backed by the rebels of the Kurdistan Workers Party (PKK) that fought a war against the Western-backed Turkish state, and the Kurdish National Council (KNC) uniting several Kurdish parties, backed by Massoud Barzani, the powerful president of the oil-rich Kurdistan Region of Iraq.

Currently, the PYD is the strongest Kurdish party on the ground in Syria and aims to build an interim administration inspired by the PKK’s political ideology.

There are long-standing ideological differences between the revolutionary Marxist rebels of the PKK, founded in the midst of the Cold War, and Barzani’s Kurdistan Democratic Party (KDP) that wants to model Iraqi Kurdistan on a capitalist Dubai-model to attract foreign investment and use the oil wealth to develop the region.

Moreover, Barzani is close to Turkey and wants to export oil and gas through pipelines to Turkey. The PKK sees Turkey as its main opponent.

Barzani also has threatened Baghdad with Kurdish independence, while PKK leader Abdullah Ocalan’s idea of confederation is against a nation-state.

Ocalan’s democratic autonomy ideology from 2005 suggests, “For Kurdistan, however, democratic confederalism is a movement which does not interpret the right to self-determination to establish a nation-state, but develops its own democracy in spite of political boundaries.”

He suggests a federation for Kurds in Iran, Iraq, Syria and Turkey, without threatening the territorial integrity of these states.

Moreover, economically, the PKK and PYD want an alternative to capitalism.

PYD’s media spokesman in Qamishli, Sihanok Dibo, told Al-Monitor that the PYD wants a self-reliant community-based economy and to build its own factories based on the ideology of Ocalan, which could provide the alternative to capitalism.

“It’s not such a productive economy [the KRG economy], it just depends on oil exporting and importing from other countries and does not help society. We want to use the useful experiences of developed countries and the European countries,” Dibo said.

Moreover, Kurdish politicians say they do not aim to separate from Syria or unite with the Kurds in Iraq.

Nevertheless, he says that the Kurds from Iraq and Syria could help each other, but that they do not want to remove these borders.

"We never thought about removing these borders. We respect the borders by respecting each other as Kurdish brothers in North, West and even South Kurdistan. All parts have their own conditions and they have their own statements,” he said, referring to the Kurdish areas of Iraq (South Kurdistan), Syria (West Kurdistan) and Turkey (North Kurdistan).

The PYD leader said that its main goal is not to remove the borders, but to achieve a democratic Syria. “We choose the German model for us, as how Germans could be united within the European union. They are in Germany, Austria and Switzerland. The united European citizenship united all the Germans.”

The Kurdish leader says that the Kurds want a democratic confederation in the Middle East and have a Kurdish union without removing the borders.

Also, rivals of the PYD agree that at the moment, a breakup of Syria is not possible, and that it is also not possible for Kurds from Iraq and Syria to unite in one state.

Mohammed Ismail, a member of the Kurdish Democratic Party of Syria (KDP-S), whose party is close to Barzani,  spoke about this issue with Al-Monitor in Qamishli.

“We do not have such a policy because of the borders and international law. We also know that because of the local political circumstances it’s not possible to engage in such a project.”

He added, “Kurds, we also have a right to do this normally because we are the same people, but it is not possible right now.”

“We know the situation that Kurdistan was separated two times during the Chalderan pact in 1516 [the Ottoman Empire defeated the Savafid Empire in 1514 and incorporated most of the Kurdish areas] and the Sykes-Picot agreement. All Kurds dream about a greater Kurdistan in four parts.”

But he noted that it’s very difficult. “Although the Arabs in the beginning of the 20th century wanted to get rid of the Ottoman empire, they became 23 states after the Sykes-Picot treaty. Until now there is no international will to make such a state for the Kurds. We don’t believe that they [international community] will accept it.”

Former CIA chief Michael Hayden said he is worried about the dissolution of all the artificial states created after World War I, and the US State Department traditionally has supported the territorial integrity of Iraq and Syria and opposed any form of Kurdish separatism in the region.

Thus, the Arab Spring might result into more Kurdish autonomy in the future, but not necessarily the merging of the Kurdish areas of Iraq and Syria into a Kurdish nation-state. This is also further complicated by political differences between the main Kurdish parties, the KDP and PKK, which are now involved in negotiations over Syria.