Are Turkish leaders ill-informed about their own history?

Many question whether Ankara has aspirations in Iraq linked to a misunderstanding of Turkish history. 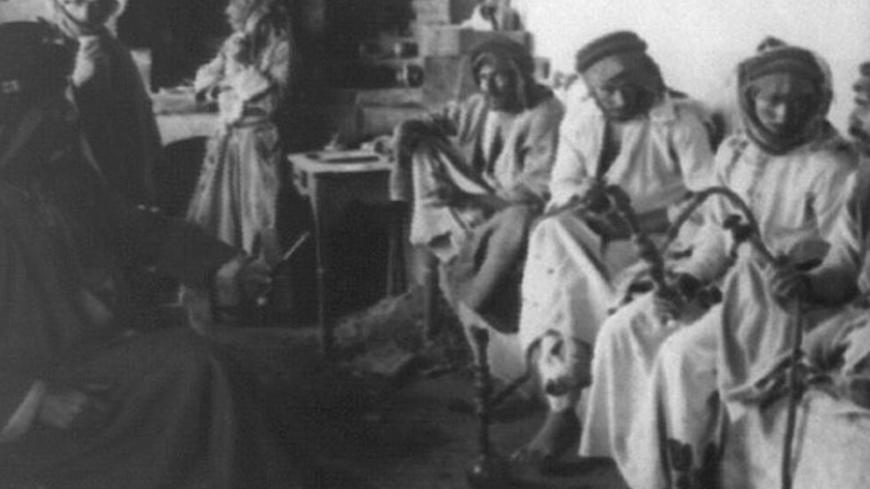 Arab men drink tea and smoke water pipes in a coffee house in Mosul, Iraq, in 1914. At the time, the city was part of the Ottoman Empire's Mosul Vilayet. - Library of Congress

When it comes to opinion forming among the many pro-Erdogan daily newspapers in Turkey, Yeni Safak is the leader. Its editor-in-chief, Ibrahim Karagul, is known for incendiary columns, especially on foreign policy issues.

Western diplomats in Ankara are perplexed when they read Karagul's columns, wondering if they might represent the official Turkish position on sensitive foreign policy issues. Their curiosity is understandable, as he is seen quite often seated next to President Recep Tayyip Erdogan in Turkey's "Air Force One" during foreign trips.

A week ago, the ambassador of an influential European country in Ankara disclosed to me that "highest officials" in the Turkish capital told him that they do not share Karagul's incendiary columns on foreign policy issues. However, only within a week after this "revelation," what he wrote and what Erdogan and the government spokesman, Deputy Prime Minister Numan Kurtulmus, said on Mosul were identical.

The same day that column was published, Erdogan touched on the same issue in a live televised speech with wording that made many question whether Turkey has irredentist claims on Iraq.

The Turkish president reminded his audience that in 1914, on the eve of World War I, "Our territories were as large as 2.5 million square kilometers, and after nine years at the time of the Lausanne Treaty [the international document of the foundation of the Republic of Turkey] it diminished to 780,000 square kilometers with the inclusion of Hatay [which joined Turkey in 1939]. When we had started the National Liberation War [in 1919], our aim was to lay claim to the frontiers of the National Covenant [adopted by the last Ottoman parliament in 1920, which included the Mosul Vilayat of the Ottoman Empire]. Unfortunately, we could not protect [those borders]. … We cannot act in the year 2016 with the psychology of 1923. To insist on [the borders accepted in 1923] is the greatest injustice to be done to the country and to the nation. While everything is changing in today's world, we cannot see to preserving our status of 1923 as a success."

Reminding his audience of the Islamic State (IS) and the Kurdistan Workers Party (PKK) presence in Mosul, Erdogan insisted that Turkey must have a military presence and political influence in the region.

"We will be in the field and at the negotiating table, too. We have to resolve the Mosul issue in Mosul. … If we sacrifice Mosul to sectarianism, we cannot prevent the problem from reaching our borders," he added.

The first part of Erdogan's remarks is the most explicit declaration of Turkish irredentism to this day. Turks had never digested the incorporation of the former Ottoman province of Mosul to the newly created state of Iraq in the 1920s. The Mosul question that had arisen between Turkey as the inheritor of the Ottoman Empire and Britain was not resolved even at the Lausanne Conference in 1923, and it proved to be the thorniest issue between the two sides after World War I.

However, the last part of the Turkish president's strongly worded statement can be seen not as irredentism, because it mainly focused on preventing Shiite Iran — through the central government in Baghdad — from expanding its influence over to the historically, traditionally and demographically Sunni Mosul. Erdogan's words could also be viewed as a commitment to prevent the PKK from gaining a foothold in the region adjacent to Rojava after its eventual liberation of Mosul from IS.

A day later, it was government Spokesman Numan Kurtulmus' turn to revive "Turkish irredentism" — for some the undying "neo-Ottomanism" of Erdogan's Turkey. Referring to the lively debate on the Mosul issue, he said, "The big picture should be seen. The game [being played] is clear. A century ago, the victors of World War I partitioned the Ottoman global state and created a new order in this region. The name of that order is Sykes-Picot. They have drawn superficial borders."

The biggest problem with the discourse of the Turkish president and other high-ranking officials, and disseminated by uncritical propagandists, is their disregard — if not outright ignorance — of historical facts.

The idea that the superficial borders of the region, primarily of Iraq, were drawn by the Sykes-Picot Agreement (1916) is purely false. The secret agreement of Sykes-Picot reached between Britain and France was never implemented. Furthermore, the borders agreed upon in Sykes-Picot were different than what later became Iraq.

Turkey never claimed its former provinces — Baghdad Vilayat or Basra Vilayat — under the defunct Ottoman state, though it is true that Mosul Vilayat was part of the National Covenant.

The issue was not resolved in Lausanne and was left to the arbitration of the League of Nations, the precursor to the United Nations. The findings of the League of Nations commission composed of a Swede, a Belgian and a Hungarian (the last who was strongly pro-Turkey) stipulated the incorporation of Mosul into the newly created State of Iraq, against the resentment of Turkey. That was in 1925.

In 1926, Turkey signed the Ankara Agreement with Britain and Iraq and legally withdrew all its claims over Mosul.

Its borders approach Baghdad and reach the town of Khanaqin in central-east of today's Iraq.

Today's Iraqi Kurdistan, including the "disputed territories" stretching from Sinjar in the northwest to Khanaqin in the southeast, is about 78,739 square kilometers (30,399 miles). That roughly corresponds to the size of the Ottoman Empire's Mosul Vilayat.

The word "vilayat," despite its Arabic roots, is not used in Iraq for administrative units. Instead, the word “muhafazat” is adopted. It translates into English as "governorate." Actually, governorate is the more accurate English equivalent of the Turkish "vilayet," which is still used by the public to describe a province.

In post-Ottoman Iraq, Mosul has become the seat of the governorate of Nineveh, which comprises 37,323 square kilometers (14,410 square miles).

In the "new" Turkish position concerning Mosul, it is uncertain whether the claim in terms of political and military presence is laid on the former Ottoman vilayet of Mosul (which was included in the National Covenant of 1920), the Iraqi governorate of Nineveh or the city of Mosul and its environs.

Uncertainty does not come from Turkish officials' lack of articulation or their disregard of important details. Contrary to their demonstrable appetite to revive Turkey's glorious Ottoman past, they are uninformed about history.

Unless Turkey's leadership and propagandists properly learn Turkish and Ottoman history (and along with it, political geography), all the incendiary political statements would either flame worries on Turkish irredentism or will be registered as empty talk in the annals of history.