Can Iran pull Turkey, Iraq away from brink of war?

Despite its tensions with Turkey, Tehran is well-positioned to bring Ankara and Baghdad closer amid their escalating war of words — but could Iran be successful in this endeavor? 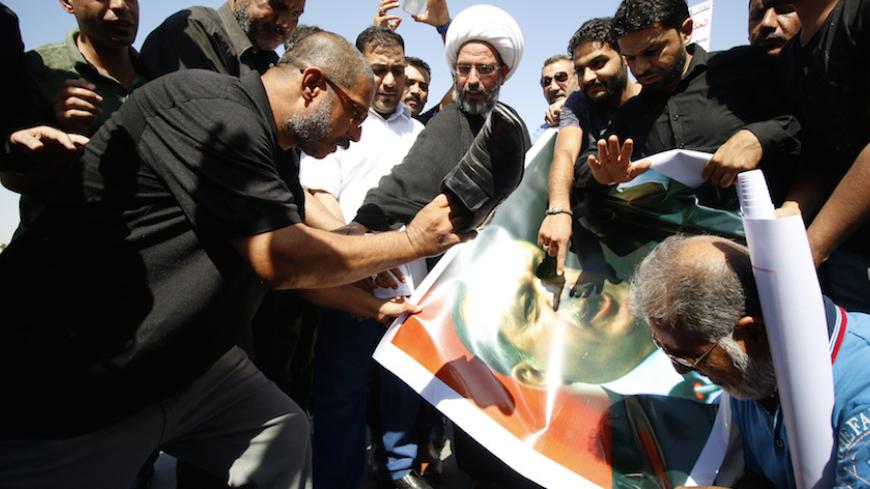 TEHRAN, Iran — “He insults me. You are not on the same level as me! You are not my equal! Scream all you want from Iraq! It will not change anything! We will do what we want to do.” Turkish President Recep Tayyip Erdogan uttered these words Oct. 11 when addressing Iraqi Prime Minister Haider al-Abadi, in the latest round of verbal sparring between the two neighbors. Turkey, which once had “zero problems” with its neighbors, today has strained relations with every single one of them.

Having encountered numerous problems with former Iraqi Prime Minister Nouri al-Maliki, Erdogan was supportive of Abadi's coming into office. Indeed, most observers were expecting that tensions between Iraq and Turkey would lessen when Maliki stepped down. However, it appears that Erdogan is determined to repeat the cycle of tension between Turkey and its neighbors as well as other regional actors. The state of Turkish relations with Syria, Armenia, Egypt, Russia, Iran and Iraq clearly demonstrates Ankara’s confused foreign policy on Erdogan’s watch.

The recent controversy over Turkey’s military presence in Iraq — while different from previous incidents in some aspects — has one major aspect that is being repeated: It is a reminder of the role that Turkey has played in Syria. Ankara was one of the first capitals to seriously call on Syrian President Bashar al-Assad to step down and was also one of the first countries that proposed military action against the Syrian government. Neither of these demands have materialized, thus forcing Ankara to adopt a more subdued policy.

This raises the possibility that Turkey’s new approach toward Iraq, and especially Mosul, is related to its defeat in Syria. Speaking in the city of Bursa on Oct. 23, Erdogan charged that Mosul has historically belonged to Turkey. These remarks come against the backdrop of past statements that Iraq is not capable of addressing the Mosul challenge on its own. This new Turkish approach has resulted in a rare case of political unity between the various factions in Iraq. From Abadi to Shiite cleric Muqtada al-Sadr, all have condemned the Turkish president’s rhetoric.

One key question is what Iran’s position toward Turkey is amid these developments. One high-ranking Iranian diplomat who spoke to Al-Monitor on condition of anonymity said, “Turkey could not achieve its objectives in Aleppo and now it is looking for the same thing in Iraq and Mosul. Naturally, however, Ankara will not get a better result in Iraq.”

The Turkish pro-government daily Dirilis Postasi argued Oct. 16 that Iran is conducting a massacre in Mosul, charging that Tehran has for two centuries created bloodshed in the Islamic world so that it can have access to the Mediterranean Sea. There was no accompanying explanation of when precisely Iran has hatched such plots, or any sources or pieces of evidence for the latter. Yet, the article can perhaps be seen as a sign of a new negative Turkish approach toward Iran.

A review of recent developments in Iraq and Syria shows that Ankara has generally seen its efforts to play a role worth its standing in the region end in failure. Though Turkey’s entry into the Iraqi and Syrian conflicts has received a lot of media attention, in the end, it has not resulted in any tangible Turkish gains — and especially in the military sphere. Thus, the big picture appears to be that Erdogan’s new approach is the result of his dissatisfaction with the regional situation — dissatisfaction that is the result of the approaches of both Abadi and the United States. Ultimately, this appears to have led Erdogan to decide to act autonomously and pursue his objectives in Iraq and Syria without waiting for the West.

Al-Monitor spoke with Alireza Miryousefi, the head of the Middle Eastern Studies Group at the Foreign Ministry’s think tank, the Institute for Political and International Studies. He said, “Unfortunately, following the Arab Spring, Turkey made some miscalculations and adopted hasty positions. It has been dealing with the consequences of its mistakes for the past five years. Questioning the legitimacy of borders or talking about the necessity of a new Sykes-Picot Agreement are not considered constructive positions. The positive point here is that, similar to Iran, Turkey will also benefit the most from stability in the region. Therefore, Iran should definitely try to lessen the gap between different political approaches in the region with high-level diplomatic negotiations.”

In a live TV program Oct. 22, Turkish Prime Minister Binali Yildirim spoke about Turkey's continuously reaching out to Iran with the hope of finding a solution to the crises in Iraq and Syria. At the same time, there is no sign that Turkey is withdrawing from Syria, and it does not appear that Erdogan is planning to change course for now. What will Iran’s reaction then be if Turkey continues with its current approach? Will there be any attempts at mediating between Baghdad and Ankara?

Speaking to the Iraqi Kurdish Rudaw news channel Oct. 30, Ali Akbar Velayati, the foreign policy adviser to the Iranian supreme leader, announced Tehran’s preparedness to step in, saying, “Iran is ready to mediate between Turkey and Iraq to prevent war.”

Meanwhile, a high-ranking source in the Iranian Foreign Ministry told Al-Monitor on condition of anonymity, “Iran is certainly interested in such a thing happening and it has made several attempts in this regard. However, the Turkish side is not interested as it believes that it can manage the issues in Mosul and Iraq through military force and the way it sees fit. However, not only does the Islamic Republic [of Iran] not believe in such a solution, but the realities of the region show that Turkey’s planned approach is unrealistic.”

Former senior Iranian diplomat Nosratollah Tajik agrees, though he predicts more Turkish pragmatism in the end. Tajik, a former ambassador to Jordan, told Al-Monitor, “Iran and Turkey have different objectives and approaches regarding Mosul. Turkey has historical claims about Mosul that make the situation more complicated, while it is in Iran’s interest to have the Iraqi government win the conflict in Mosul and destroy one of the main bases of Daesh [Islamic State]. Turkey will follow a destructive pattern, but in the end it will have to accept the new order — although it is trying to allocate a bigger share for itself in the new order.”