Turkey's desired outcome in Syria would result in massively scaling back Iran's influence in the region, with Tehran losing its ally in Damascus, Hezbollah confined to Lebanon and Iraq threatened. 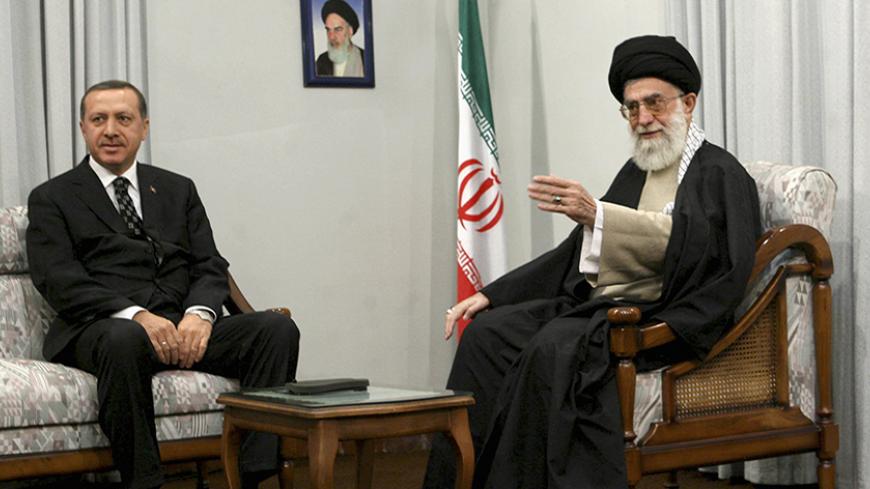 In an Oct. 13 speech marking the new academic year at Marmara University, Turkish President Recep Tayyip Erdogan asked, “What kind of religious leader is this [who] says ‘[Syrian President Bashar al-] Assad is the only one challenging Israel’? Assad didn’t shoot a bullet at Israel. Assad killed 250,000, and you’re still supporting him, sending him money and arms.” The religious leader in Erdogan's crosshair was Iran’s supreme leader, Ayatollah Ali Khamenei.

The Marmara speech was possibly the first time since the Syrian crisis erupted that Erdogan has directly slammed Iranian policy on Syria. The weirdest part of it was his criticism of Khamenei, a clear indication that what once had been strong ties between the two countries has been radically altered by the clash of interests laid bare by the ongoing civil war. Despite deserving to lead the news, Erdogan's remarks did not receive the media coverage they warranted in Iran, the Arab world or internationally.

While discussing Erdogan, an Iranian official told Al-Monitor by phone, “The death of 250,000 in Syria was caused by nations that back the terrorists in Syria. Turkey is one of those states, and it has full responsibility for the situation today. Mr. Erdogan personally knows that Iran is innocent. Iran is helping a legitimate government restore control over its land and fight terrorists coming from around the globe to kill and terrorize civilians.”

The source also said that Tehran had decided that the time is not yet right to respond publicly to what he called Erdogan’s “irresponsible” comments. He stated, “It will require hours of speaking to remind him of his last visit and what he told the [supreme] leader. We don’t have to time for this right now, and we know this is only for domestic consumption.”

The official further said of Erdogan, “He has to ask himself, who opened the borders? Who gave weapons to these extremists? Who is it that transformed his country into a huge training camp?” He explained that Iran had been surprised by Erdogan's rhetoric. “This is another indication that Ankara isn’t really serious about cooperating to end the crisis in Syria. It’s such a shame that an essential country in the region is still not determined to fight terrorism, is hesitant to help its Kurdish neighbors in any way and at the same time is attacking those who warned of this end from the beginning.”

Erdogan paid his most recent visit to Tehran on Jan. 29, as prime minister. Supposedly quoting Foreign Minister Mohammad Javad Zarif, Naqavi Hosseini, spokesman of the National Security and Foreign Policy Commission, told reporters Oct. 8 that Erdogan would be paying Iran a presidential visit and meet his counterpart and other high-ranking officials. It is not known whether the visit is still on after Erdogan's critical remarks.

Turkish-Iranian relations appear to have peaked during Erdogan’s January visit and the signing at that time of a strategic cooperation treaty. Khamenei's words were as clear as day, with his being reported as saying that Iranian-Turkish relations were at their best in centuries and that both countries must seize the opportunity to solidify their relationship. Erdogan offered that Iran felt to him like a second home. So what happened? Why do Turkish-Iranian relations now appear to be going in the opposite direction?

As with most other shake-ups in the region, Syria appears to be the problem. Both countries earlier expressed a keenness to move toward compromise, but events on the ground threw barriers in the way. The rise of the Islamic State (IS) and the formation of the US-led coalition imposed on all parties the need to move forward with plans to deal with the Middle East’s new sick man, i.e., Syria. There was no more time for diplomacy or kind words, as the map of regional alliances became clearer by the day. As it turned out, Turkey and Iran were not in the same boat. Each backed a different set of allies on the ground and around the region.

Turkey’s strategist and prime minister, Ahmet Davutoglu, has been seriously thinking about his country’s role in the new regional order. On Oct. 19 he declared that Turkey would not become the guardian of the Sykes-Picot borders. Ankara is certain that the situation that prevailed before the war against IS and the coalition airstrikes has been superseded. It is therefore aiming to secure some gains before shooting a bullet. It knows well that what applies today — when the coalition needs to make use of its borders and position — will not apply after the coalition prevails (should that become a reality).

The removal of Assad is Turkey's first priority. This need not be achieved directly, but Ankara believes it should be acknowledged as a necessity in solving the Syrian crisis. Full control by Turkey's allies over northern Syria, from the border with Iraq to the Mediterranean, would ease Ankara's concerns over the possible establishment of a Kurdish state on its border, in addition to being an essential element in defeating Assad’s regime and hastening its fall. Northern Syria would become a safe haven for the Turkish-backed Syrian opposition to establish their control and expand under coalition airstrikes. Therein lies Turkey's problem with Iran.

The Iranians want to rid the region of IS at any cost. Although it is true that they refuse to support or bless the US-led coalition and have criticized its effectiveness, they know that the strikes are succeeding in keeping IS somewhat in check. They are also thinking of their post-Sykes-Picot status, or at least about keeping the sick man alive to the extent possible to prevent losing too much of the ground they have gained during the last decade.

To Iran, the fall of Assad would mean the loss of Syria as a whole and the isolation of Hezbollah within the borders of Lebanon. It would also mean that Iranian-influenced Iraq, where most Sunni and Kurdish regions are outside the government's control, would be under threat. In such a scenario, Iran’s influence in the Levant would be severely scaled back. This possibility has pushed Iran toward ditching its usual “policy of ambiguity” concerning its presence on the ground in the region. Today, images and statements touting its military role in Iraq have became common, even exaggerated, sending a clear signal that it has boots on the ground and that it is ready to do whatever necessary to achieve its objectives.

The clash between Iran and Turkey is likely to intensify, but only in regard to the battlefields of Syria and Iraq. These descendants of the Safavid and Ottoman Empires will always keep their differences away from their borders and mutual interests. Thus, it is unlikely that Turkish-Iranian economic relations will suffer. Business should proceed as usual.