Without a proper budget and new weapons procurement, the Lebanese army faces an uphill struggle in combating terrorism and securing the country. Why then have recent international donations not materialized? 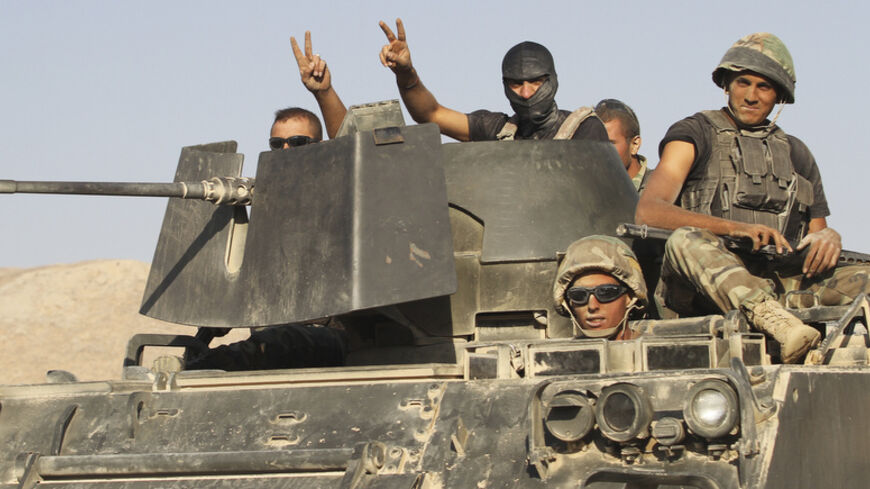 Lebanese army soldiers gesture while riding on an armored vehicle while they exit the Sunni Muslim border town of Arsal, in the eastern Bekaa Valley, Aug. 28, 2014. - REUTERS/Ahmad Shalha

BEIRUT, Lebanon — While the Lebanese army continues to perform its multiple duties on several fronts, its challenges persist due to both financial and political reasons. But the result is one and the same — threatening Lebanon’s stability at this critical stage.

When speaking about the open fronts against the army, three of them can be highlighted. First, there is the Lebanese southern front along the Lebanese-Israeli border. In the wake of the July 2006 war that broke out between the Israeli army and Hezbollah militants and ended with the UN Security Council Resolution 1701, the army had to support the UN forces deployed in the region with no less than three fighting brigades to maintain security and impose the state’s sovereignty.

The second front is located to the north and east, where around 278 kilometers (172 miles) of borderlands have been open to the Syrian war that has been ongoing for three years. A long and thorny borderline stretches along this region, allowing all sorts of operations that include smuggling merchandise, people, weapons and terrorists. This front includes the heated barren lands of Arsal, which stretch along 70 kilometers (45 miles) of bumpy, mountainous terrain. The army, in cooperation with Hezbollah fighters, is waging the fiercest battle near Arsal against the armed terrorists of the Islamic State (IS) and Jabhat al-Nusra.

Finally, the cabinet representing the executive authority said that the army must maintain security in Lebanese territory. This represents the third front, i.e., the internal one. The cabinet took this decision after seeing the small number and weak capacities of the internal security forces. The army’s internal duties include controlling around 12 Palestinian camps across Lebanon, from south to north, that accommodate around 270,000 Palestinian refugees. Add to that the ongoing bloody confrontation between the army and radical terrorist sleeper cells. The latest episode of this tragedy ended with the murder of a soldier on the morning of Oct. 17 in Akkar, which is considered the primary contributor of recruits for the Lebanese army, as many soldiers hail from this remote border district that is adjacent to Syria.

The killing happened only a few days after a series of similar attacks on the army in the same northern regions.

With these important duties and dangerous challenges, what are the capacities of the Lebanese army?

According to parliamentary sources dealing with the national defense file, in terms of staff the Lebanese army consists of around 55,000 personnel. Those include around 40,000 soldiers and 15,000 recruits who have joined the army as part of the conscription for Lebanese youth and whose service time was extended after the conscription law was abolished in 2007. However, this figure does not reflect the actual fighting capacity of the army. According to recognized standards among armies, for each soldier effectively fighting there are five supporting members, whether at the level of management, logistics, service or command. Therefore, the Lebanese army’s effective fighting capacity might not actually exceed 8,000 out of its 40,000 soldiers.

In terms of equipment, the Lebanese army has been suffering from the absence of a comprehensive armament plan for years. The same parliamentary sources told Al-Monitor that such a plan was put in place 30 years ago, in 1983. Ever since, the army has made do with donations and sporadic or arbitrary aid that do not fall in the framework of a comprehensive study of its needs as a function of the duties required of the army. However, the Lebanese government tried to approve a special budget for the rearmament of the army just over two years ago, on Sept. 19, 2012. The budget was set at $1.6 billion, divided over installments for five years.

However, the plan has not been implemented since the annual budget allocated to equip the army does not exceed a few hundred thousand dollars. This actually hinders any development of the army’s capacities, as MP Ibrahim Kanaan, chairman of the Finance and Budget Parliamentary Commission, told Al-Monitor.

With this problem, then-President Michel Suleiman appeared at a news conference on Dec. 29, 2013, to announce that Saudi King Abdullah bin Abdulaziz had decided to offer a donation worth $3 billion for the Lebanese army to buy what it needs from France. More than 10 months have passed since this announcement, but the issue remains pending, amid talks that the donation has stumbled in the trap of commission-seekers or that it was impeded several times for political reasons somewhere between Riyadh, Paris and Washington.

The analysis seemed logical when former Prime Minister Saad al-Hariri, a holder of Saudi citizenship, revealed another donation from the Saudi king worth $1 billion to equip the army, provided that Hariri handle the spending himself. The donation was unveiled only four days after the outbreak of the battle between the army, IS and Jabhat al-Nusra in Arsal on Aug. 2. This gave the impression that the initial $3 billion donation was either stopped or delayed, which necessitated a new step to replace it. However, the new step has yet to be taken.

Amid this hubbub, Iran came into the picture. During the quick visit of Iran’s Supreme National Security Council Secretary Ali Shamkhani to Beirut on Oct. 9, it was announced that Iran was ready to equip the Lebanese army with what it needs through an unconditional and complete donation.

However, the surprising move came from Washington and New York. American and UN diplomats informed the Lebanese authorities of their refusal to accept the transfer for the Iranian grant to the Lebanese army, even if it were completely free and unconditional. UN Special Coordinator for Lebanon Derek Plumbly communicated this refusal to Lebanese Defense Minister Samir Moqbel on Oct. 13, as part of implementing UN Resolution 1747 (2007), which states in its fifth article, “Iran shall not supply, sell or transfer directly or indirectly from its territory or by its nationals or using its flag vessels or aircraft any arms or related materiel, whether or not these materiel originate in the territory of Iran.”

Legal expert and former Labor Minister Salim Jreissati told Al-Monitor, “Interpreting the UN Security Council resolution this way is a sort of unconfirmed personal opinion because the international community’s sanctions and legitimacy toward Iran are limited to trade exchanges. Article 5 of the same resolution 1747 elucidates this point, as it continues, ‘All States shall prohibit the procurement of such items from Iran.’” As a result, it is clear that the ban does not include donations, especially when the intended donation is offered to an army fighting terrorists who are condemned in UN Resolution 2178.

Amid this ongoing debate, it seems that two results are certain. First, the Lebanese army continues to fight its battles on all fronts. Second, its armament will remain a topic of controversy, stuck between theoretical donations and banned grants until further notice.