The Lebanese army is facing its worst challenge since the end of the civil war in 1990, with many defectors threatening the military establishment's unity. 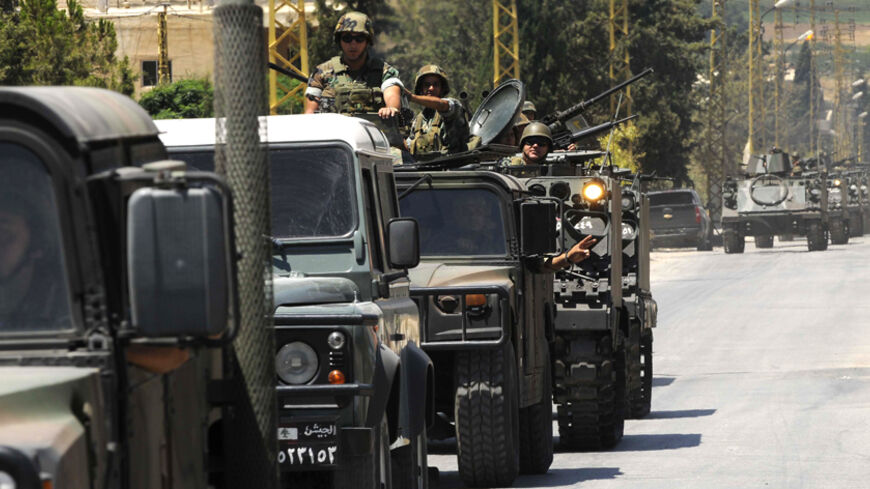 As the Syrian dilemma continues, neighboring Lebanon is getting more and more of the spillover that’s becoming an imminent threat to its already fragile security. Since the end of the bloody 15-year civil war in 1990, Lebanon’s army has been one of the few elements that most Lebanese agree on; the military establishment was, to many, the only savior any time the situation got tense, or threats grew, despite the army’s humble capabilities.

On Oct. 16, a Twitter account linked to Jabhat al-Nusra, also known as al-Qaeda in the Levant, posted a video that shows defecting Lebanese army Cpl. Abdallah Shehadeh in front of a Lebanese army Humvee filled with weapons and ammunition, which he took when he decided to join Jabhat al-Nusra.

“These machine guns, ammunition and night goggles are now bounties for the militants,” he said, adding that he defected from the Lebanese army “that is directed by 'Iranian Hezb Alat' (Hezbollah).” He noted that he's joining “the ranks of 'al-Mujahedeen'” and called on Jabhat al-Nusra leader Abu Mohammed Al-Golani to take the initiative and enter Lebanon “to counter Hezbollah and the Lebanese army that is affiliated with it and to free our people because there are no men in Lebanon." He concluded: “Hezbollah entered Syria and killed the people. So it is natural that the mujahedeen enter Lebanon to kill Hezbollah and their followers.”

Shehadeh wasn’t the first to defect from the Lebanese army, and isn’t expected to be the last. At least six soldiers made the decision in the last three months to join al-Nusra or the Islamic State (IS). “These are isolated incidents,” said Wehbi Katicha, a former Lebanese general and an adviser to the head of the Lebanese forces party, Samir Geagea. “We can’t call this [mass] defection; a [mass] defection needs a whole battalion or regiment, and this won’t affect the army at any level. The army went through worse days before, yet maintained its unity, so there’s nothing to be concerned about,” he added.

“This phenomenon should be linked to the war with Jabhat al-Nusra on the borders with Syria,” Gen. Elias Farhat, the former head of Lebanon’s army’s Staff and Command College, said in an interview with Al-Monitor. “This continues to be individual desertion incidents that aren’t affecting the army’s unity, even though it is an attempt to paralyze the military and hit its members’ confidence and will to fight.”

Farhat said the good news is that, to date, there’s no environment nurturing this trend. “Families of the soldiers who deserted aren’t welcoming the decision, and now that Saad Hariri (the Sunni leader of the Future movement) supported the army, this will be reflected positively on the ground.”

A Lebanese military source who spoke to Al-Monitor on condition of anonymity expressed concern, saying: “It’s not 2005; political figures and parties aren’t in control of the street anymore. Therefore, it’s not easy to isolate such a trend.”

The source elaborated: “The threat is bigger than it appears to be. It is true that there are no big defections, but the stage is becoming set for some worse scenarios. Therefore the army and the political parties have to be wise enough to help rid the country of such a bitter sip, else the whole country be on the brink of some serious if not bloody consequences.”

Both Katicha and Farhat recalled the 1976 mass defection that hammered the army and threatened its unity. Farhat said: “In 1976, the defection was welcomed by Muslims as it was seen as a blow to the Christian army. There’s nothing similar today; it is true that all defections are from the same sect and area, Akkar, which is the military’s main tank, but this is not going to last long.”

From his part, Katicha sees no strategic threat to the army, saying, “When the whole sect announces that it doesn’t believe in the military establishment anymore, then we have to start worrying, and this is not going to happen.”

Our military source thinks that reasons behind the desertions should be studied. “The army needs to restore its former status. If we lose the army, we will lose the country. This is as serious as saying the civil war is on the doorstep, that there’s a Sunni problem in Lebanon,” he said, adding, “Why are the Sunnis frustrated, angry? There are reasons that should be taken into serious consideration or else they are going to choose al-Nusra and IS.”

According to the source, any solution for this trend should tackle three fronts. “There should be efforts on the social, political and military sides to solve this dilemma. Some will say it is not the time, but there’s no time, either. Some soldiers lost confidence in the whole establishment; they have concerns that should be answered,” he said. "Time is running out because in Tripoli, for example, there are serious concerns the city might soon get out of control. This is what many political leaders know very well.”

This is the first time the Lebanese military has faced such a challenge since 1990. Such a rare challenge is stirring a debate within Lebanese elites over the country's future, and generating a national discussion on a matter that had been taboo. But since the battle for Arsal on Aug. 2 and the abduction of Lebanese soldiers by extremists, the debate became louder.

Although two months have passed since the abduction, the government failed to secure the release of all of its soldiers either through a military operation or negotiations. A few soldiers were released as a goodwill gesture, while three were slaughtered by IS with videos of their killing posted on YouTube. Many warned that this will have dreadful implications for the army and its soldiers.