Delay of French-Saudi military aid to Lebanon a mystery

US military aid has filled a crucial gap in Lebanon as a Saudi-French aid package has been delayed for unknown reasons. 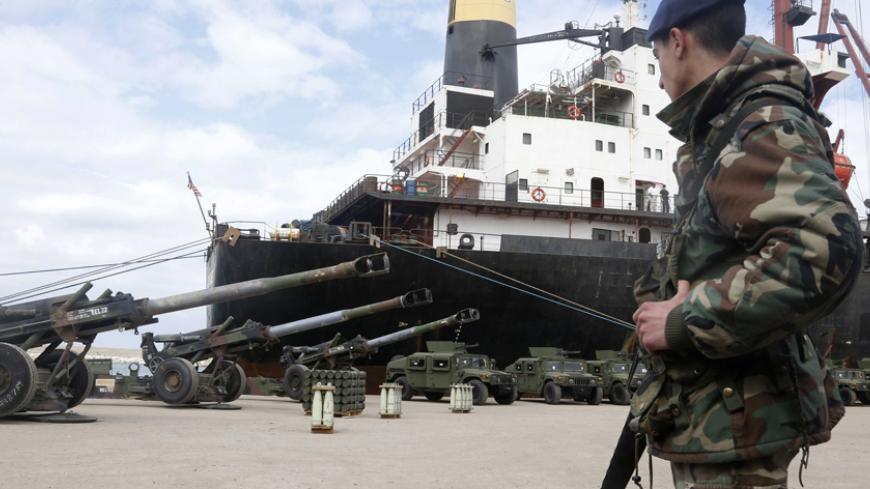 A Lebanese soldier stands guard in front of a ship that delivered a military donation from the US government to the Lebanese army, during a ceremony at Beirut's port, Feb. 8, 2015. - REUTERS/Mohamed Azakir

The Lebanese army received a new shipment of weapons from the United States on Feb. 8 as part of aid protocol. A high-ranking Lebanese military official told Al-Monitor that Washington is Lebanon's primary and most committed ally in its war on terrorism.

Since confrontations erupted between the Lebanese army and terrorist groups — such as the Islamic State (IS) and Jabhat al-Nusra — on the Lebanese-Syrian border, the United States has taken the initiative to support the Lebanese army with arms, ammunition and the exchange of information and expertise. The official, who spoke on condition of anonymity, said that this support was further reinforced following a meeting of army commanders in Washington on Oct. 13, 2014, in the context of the international coalition against IS.

Lebanon took part in the meeting presided over by US President Barack Obama, even though Lebanon is not an official member of the coalition. This participation came about two months after the deadly clashes in August 2014 between the Lebanese army, IS and Jabhat al-Nusra in Arsal, during which about 40 soldiers and police officers were held hostage. At the meeting, coalition members addressed their roles in the war against terrorism in the Middle East, as well as how to deal with the disparity in opinions between Turkey and the West over the situation in Syria.

The official told Al-Monitor that the Lebanese delegation discussed Lebanon's situation in clear, straightforward words: “Lebanon is not asking for any direct involvement by the coalition on its territory, be it aerial, ground or maritime. The Lebanese army alone is capable of fighting the battle against terrorists. All that is being asked is support through arms, ammunition and equipment.”

The official noted that the United States quickly became aware of the importance of the Lebanese proposal, and that ever since, weapons aid became a pillar in the support awarded to the Lebanese army.

According to the official, following the meeting, the Lebanese army received many shipments from the United States, including Hellfire missiles, which the army attaches to its Cessna airplanes and uses in confrontations with terrorists. Washington also provided missiles for military helicopters, which are crucial in this war, and heavy artillery and shells, which the army uses to target terrorist hideouts on a daily basis — hence the army’s current equipment shortage. The United States also equipped the Lebanese army with modern communication technology and state-of-the-art reconnaissance equipment for night operations.

Meanwhile, the official noted that the Saudi-funded French arms deal is facing obstacles, having been delayed for unknown reasons by Lebanon. He said that more than a year had passed since Dec. 29, 2013, when former Lebanese President Michel Suleiman announced the military aid deal in a Beirut press conference.

Ever since, negotiations have continued between the three concerned countries with no results. According to the official, the French donation totaled $3 billion, one-third of which was allocated to weapons. The deal also included noncombat military aid, such as establishing a $500 million military hospital and awarding $300 million for training programs.

According to the official, over the past year and a half, Lebanese officials have made futile visits to Saudi Arabia to seal the deal. The August 2014 announcement of a Saudi donation to the Lebanese army was also futile. This raises more than one question regarding the delay of French-Saudi aid, though the official is not familiar with these reasons, suggesting instead that diplomatic sources would better understand the delay.