The Lebanese army has been under-equipped for decades, so it must now coordinate with Hezbollah and the Syrian army in its offensive against Islamic militants on the border and with assistance from the United States and the United Kingdom. 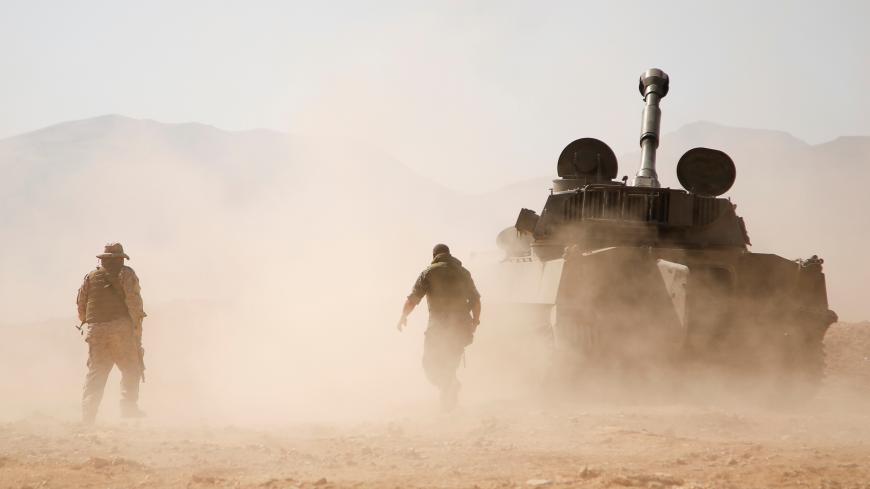 BEIRUT, Lebanon — The Lebanese Armed Forces on Aug. 19 announced the launch of Fajr al-Joroud, an offensive against the Islamic State (IS) along the Lebanese-Syrian border. The campaign follows on the heels of a late July Hezbollah- and Syrian army-led offensive, backed by the Lebanese army, against Hayat Tahrir al-Sham (formerly the al-Qaeda-affiliated Jabhat al-Nusra) outside Arsal. The two operations indicate that a mutual decision must have been made by the three forces to remove the IS and al-Qaeda threats along their shared border. A week into the Arsal offensive, Hezbollah proclaimed victory and reached a cease-fire agreement with the fighters in the area.

The Lebanese Armed Forces have been trained and equipped by numerous Western countries, but mainly the United States and the United Kingdom. On the first day of the Fajr al-Joroud offensive, Lebanese Armed Forces spokesman Ali Qanso pronounced, “The Lebanese army is not coordinating with Hezbollah and the Syrian army, either directly or indirectly.” That said, images and sources on the ground suggest a different reality, indicating close coordination between the Lebanese Armed Forces, Hezbollah and the Syrian army. This led to mockery on social media and the posting of pictures of Hezbollah fighters and Lebanese army soldiers side by side in the offensive accompanied by a hashtag in Arabic that loosely translates, “Oh what a coincidence!” Meanwhile, British and US officials have both confirmed their forces' active presence among the Lebanese Armed Forces in the previous and ongoing border operations, resulting in an incredibly awkward reality on the ground.

Lebanon and Syria have indeed maintained active lines of communication, as publicly evidenced by the actions of Abbas Ibrahim, a retired major general who heads Lebanon’s General Security. Ibrahim has played a major role in mediation efforts and negotiations to secure the release of Lebanese and Syrian captives held by armed opposition groups. He coordinated closely with the Syrian army in the cases of the Lebanese pilgrims held in Azaz (2013), the Syrian nuns held captive in Maaloula (2014), the exchange of Lebanese security forces (and Syrian fighters) held by Jabhat al-Nusra (2015) and the exchange of Hezbollah fighters held by Jabhat al-Nusra's most recent incarnation in Idlib (in August). As for Hezbollah, the high level of cooperation between Lebanon’s strongest nonstate armed actor and the Lebanese army has long been an open secret.

So why issue a denial? Local and international politics are at play.

The United States and the United Kingdom cannot be seen as having any association, even indirect, with Hezbollah and the Syrian army, essentially forcing all parties concerned to participate in what can only be described as an international charade for the sake of plausible deniability. According to the source close to Hezbollah and the Lebanese Armed Forces, “US Central Command called the Lebanese army chief and asked him to deny any cooperation, telling him that while they are aware of cooperation, it has to be denied publicly.”

The Lebanese army emerged as a shell of its former self from the 15-year civil war in 1990, and was fractured, weak and under-equipped. Over the ensuing years, as the army tried to rebuild as a national institution, assorted Lebanese officials and international parties worked hard to prevent it from becoming a strong, well-equipped fighting force.

Local leaders favored a weak army because they feared a strong one could limit their power within their political fiefdoms, while foreign actors feared a strong army might pose a serious threat to neighboring Israel, with which Lebanon remains at war. Outside powers also voiced concern that army weaponry could end up in the hands of Hezbollah, further posing a threat to Israel.

At the end of 2013, Saudi Arabia gave Lebanon $3 billion to purchase predetermined weapons from France in an effort to build the army into a counterforce to Hezbollah. The gift was rescinded in February 2016 for what the Saudis supposedly considered Lebanon's failure to adequately condemn attacks on the Saudi diplomatic mission in Iran. Political sources in Beirut say the aid was rescinded because Saudi Arabia did not have the money to pay for the package.

While the Lebanese Armed Forces have received foreign military aid, it has largely been of a non-lethal nature. Over a span of five years beginning in 2005, the United States provided non-lethal military aid to the Lebanese Armed Forces, including night-vision goggles, uniforms and a few Humvees, to the meager tune of $700 million. Then in 2010, along with France, Washington temporarily suspended aid to the army after pressure from Israel over concerns that materiel might end up in Hezbollah's hands.

Lebanese political officials also actively colluded with Israel’s most ardent ally to prevent the Lebanese army from obtaining advanced weaponry. When in 2008 the Russians offered to give the army a military package consisting of 77 T-72 tanks, ammunition and eventually MiG-29 fighter jets, in an effort to turn the Lebanese army into a national fighting force, Defense Minister Elias Murr, a close US ally, complained to the US ambassador. Murr said he had been “trapped” into accepting the gift, but would ensure that the army would not take it “before 2040.” Almost 10 years later, the Lebanese army is yet to accept delivery.

The clear and immediate threats from IS and al-Qaeda to Lebanon’s stability have forced states to step up and work on better equipping the army. As a local security source pointed out, “They give enough to the Lebanese army for it to survive, but not enough for it to be strong enough to fight Israel.”

Certain factions in the government have continued to scupper offers of military aid. A 2015 deal between the army and Russia — which included around 250 Kornet missiles, two dozen rocket launchers and dozens of rockets for $500 million — never materialized because government officials, in particular Hariri, opposed it. The same happened concerning an offer by Iran to supply the Lebanese Armed Forces with military aid in the battle against IS, but the pro-Saudi March 14 officials prevented the deal from seeing the light of day.

The current unspoken partnership between the Lebanese Armed Forces, Hezbollah and the Syrian army is a direct result of the efforts of those who have worked so diligently to keep the Lebanese Armed Forces under-equipped. By doing so, they have also inadvertently strengthened Hezbollah, making it the only viable military force in the country able to repel armed groups along the Lebanese border, and are now creating a reality on the battlefield that everyone is aware of but no one wants to acknowledge.