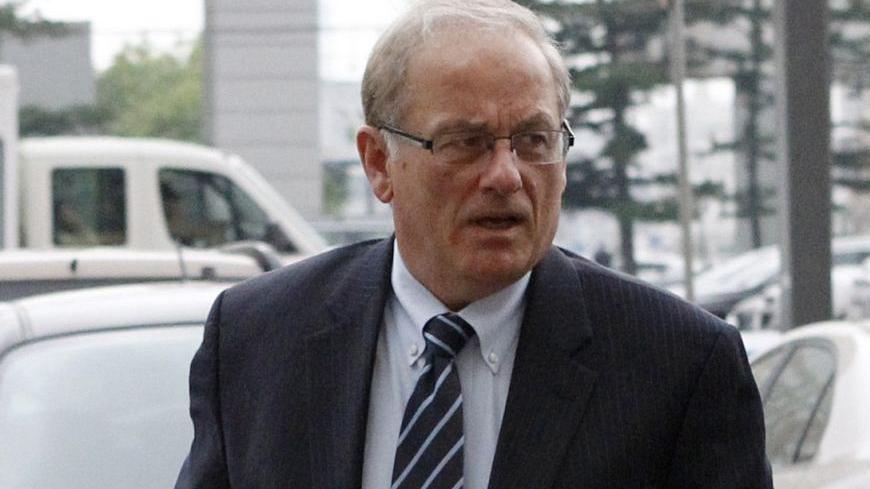 Fred Hof, a former US State Department official who works on Syria, arrives at the headquarters of the Russian Foreign Ministry in Moscow, June 8, 2012. - REUTERS/Maxim Shemetov

Breaking with the more cautious position of the administration he served, Fred Hof, a former top State Department adviser on Syria, said Thursday that the US should provide arms to select Syrian rebels and might target the Syrian regime’s command and control centers and missile forces to prevent the use of chemical weapons.

Hof, who left the Obama administration in September and is now a senior fellow at the Atlantic Council, told Al-Monitor in an interview that “it is inevitable” that the US will begin providing weapons to elements of the Syrian opposition as the conflict intensifies. The US, he said, has now had sufficient time to vet the rebels who are organizing themselves politically as well as militarily and needs to send weapons to influence the shape of Syria’s future government.

Hof spoke following reports that the Syrian regime last week fired half a dozen Scud missiles against opposition forces that have been gaining territory including on the outskirts of the Syrian capital, Damascus. President Barack Obama has warned Syrian President Bashar al-Assad that using chemical weapons against his own people would be a “red line” that would have serious consequences but has not specified what those might be. More than 40,000 people have already died in Syria since protests broke out in March 2011.

“I might ignore the chemical side and concentrate on targets that could disable the regime’s ability to wage war across the board,” said Hof, a former US Army officer with decades of experience in the Middle East. “It could be very complicated and perilous to go after the chemicals themselves” because of the danger that striking such stockpiles would disseminate poison gas to civilian populations.

In a subsequent email to Al-Monitor, Hof added that he was not advocating a pre-emptive attack on Syria but only suggesting “how might the US most effectively respond militarily if the regime uses dirty weapons.”

Hof, who originally joined the Obama administration as an adviser to Middle East envoy George Mitchell to work on Syrian-Israeli peace, turned to helping organize the US response to the uprising in Syria in April 2011 when, he said, “it became clear that Bashar al-Assad was going to use violence to counter peaceful protest, thereby putting his own legitimacy in jeopardy, legitimacy which he eventually lost.”

Over ensuing months, the conflict has become increasingly bloody as the rebels have received arms from countries such as Saudi Arabia and Qatar and captured government weapons depots.

Hof defended the US decision not to stage a Libya-style intervention in Syria initially and to leave the arming of the rebels to others, even though extremist groups such as the al-Qaeda-linked Nusra Front, appear to have benefited.

Washington this week designated Jabhat al-Nusra as a terrorist organization at the same time the US and more than 100 other nations recognized a new Syrian political alliance, the National Coalition of Syrian Revolutionary and Opposition Forces, as the sole legitimate representative of the Syrian people.

“It’s always possible to look back from the vantage point of December 2012 … and retroactively reassess what might have been done months earlier but that’s ultimately a useless exercise,” Hof told Al-Monitor. He said the US provision of so-called non-lethal assistance, including communications gear, to the rebels had been significant in preventing the “Syrian revolution from being strangled in the cradle” and that US officials had gained crucial knowledge over the past 20 months.

“I presume that the US government has done all of its due diligence and knows how to do this,” Hof said of his recommendation that weapons now be sent. “I suspect the provision of nonlethal assistance has been a good laboratory for figuring out how to get things into Syria — who’s reliable.”

Later Thursday, at an appearance at the Atlantic Council, Hof said that while he wished diplomatic efforts would end the conflict without US intervention, “guns will likely decide the outcome and those who want to influence and shape the outcome must get into the arena. This is not about messaging; this is about doing.” He also clarified that he meant providing Russian and other former East bloc weapons, not American arms.

In the interview with Al-Monitor, Hof praised the new Syrian Opposition Council as far more credible and better led than the feckless Syrian National Council (SNC) which it subsumed. Despite continuing doubts over the new group’s ability to appeal to Syria’s minority Alawite and Christian populations, Hof said “this coalition is much, much broader than its SNC predecessor.”

He said the new group has “deep reach into Syria and the local coordinating and revolutionary councils.” While Hof said he did not know personally the council’s leader, Sheikh Ahmad Moaz al-Khatib, he praised its second-in-command Riad Seif, a veteran Syrian dissident.

“Riad Seif is a highly respected and reassuring individual,” Hof told Al-Monitor. Seif, who had been an SNC member, recognized that it could not “outgrow the relative narrowness of its base” and “was the real catalyst” for forming the new group.

Al-Khatib has aroused controversy for criticizing the Obama administration’s designation of Jabhat al-Nusra as a terrorist group, indicating that the new Syrian opposition group feels it needs such fighters to defeat Assad. Hof, at the Atlantic Council, said however that Jabhat al-Nusra “terrifies” many Syrians and that “it was important for them to hear the US take an unambiguous view about the unadvisability of this organization playing a role in Syria” after Assad goes. Hof called the Nusra Front “al-Qaeda in Iraq” in a Syrian guise.

In the interview, Hof said the new council would have to work hard to assuage the concerns of the Alawites who have ruled Syria for four decades, as well as other minority groups, that they will not face retribution. He noted that 260 rebel commanders have formed a Supreme Military Council and said the next step was to see the civilian and military organizations become “hard-wired” to each other and for the opposition to form a provisional government that included representatives of minority groups in top positions.

“You can’t beat something with nothing,” Hof said, reasoning that millions of Syrians still on the political fence would not abandon the Assad regime until they knew who and what would take its place.

Hof said it was crucial to preserve as much as possible the structure and personnel of the Syrian government so the country does not dissolve into complete chaos once Assad goes, as Iraq did following the 2003 US invasion.

“You get rid of the bad guys — the [Assad] family and its enablers must be gone lock, stock and barrel. But continuity of government otherwise is extremely important,” he said.

At the Atlantic Council, Hof suggested that another way of persuading Syrians on the fence to end their grudging support for the regime was for the so-called Friends of Syria – a group of about 120 nations that backs the opposition -- to form an interim Syrian reconstruction fund in anticipation of Syria’s massive need for aid after the regime falls.

“Its establishment now would in and of itself send a powerful signal to the Syrian business community and 23 million Syrians that putting the Assad era behind them would pay dividends very rapidly,” Hof said.

Assad has benefited until now from staunch Russian and Iranian support. Hof told Al-Monitor that the US government has been right not to consult Iran about a political solution in Syria despite that country’s crucial role in arming and otherwise bolstering the Syrian regime.

“The Iran-Hezbollah combination is fundamentally part of the problem, not part of the solution,” he said, referring to Iran’s alliance with Hezbollah, the main Shiite political and military force in Lebanon. Iran has used Syria as a conduit to arm Hezbollah. Hof said Assad, who took office 12 years ago after the death of his father, Hafez, had turned Syria from the “senior partner” in ties with the Iran to the “junior partner” and “an essential prop in Iran’s penetration of the Arab world.”

Asked if he thought Iran might recalibrate its support for Assad as he becomes increasingly embattled, Hof said he doubted it. “Iran is going to go down in Syria with the ship,” he said.

Later, at the Atlantic Council, Hof, who in 1983, as a US Army officer helped draft the official report on the bombing of the US Marine barracks — widely attributed to Hezbollah and Iran — said: “As an American, it would not break my heart to see the Iranians beaten in Syria.”

Barbara Slavin is Washington correspondent for Al-Monitor and a senior fellow at the Atlantic Council where she focuses on Iran. You can find her on Twitter @BarbaraSlavin1.