Why hasn't Egypt taken a clear stance on Syria?

Since Egyptian President Abdel Fattah al-Sisi came to power two years ago, Egypt has repeatedly stated that it wants to preserve the Syrian state and army, but it has been vague when it comes to voicing an opinion on the regime itself. 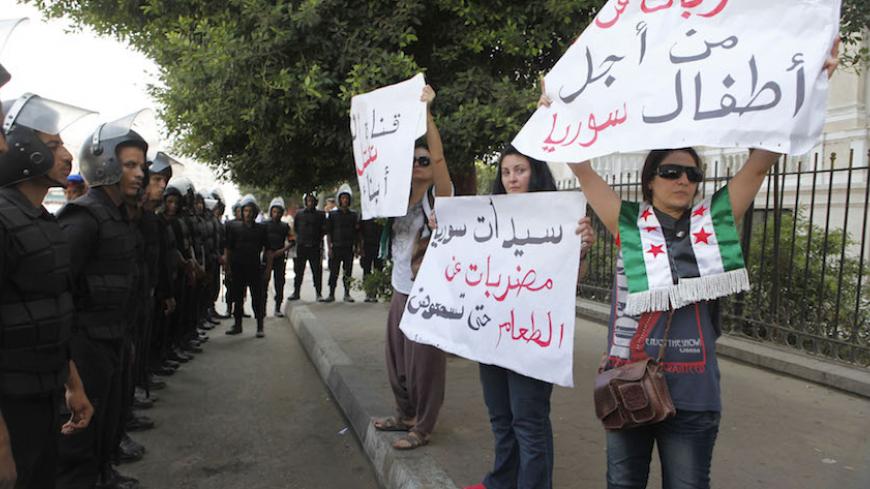 The Syrian crisis has seen many players, consultations and initiatives, but all have led to more airstrikes and civilian victims, as if the negotiations were not meant to achieve peace, but to confirm everyone’s willingness to continue fighting.

The bellicose military players in Syria include the regime, its opposition, the Islamic State (IS), Jabhat al-Nusra, Russia, Iran, Hezbollah and the US-led international coalition. Other countries participate — most prominently Turkey. Amid all these voices, countries with pivotal roles to play, such as Egypt, face difficulties espousing a clear view and adopting a definitive position on the crisis.

The aforementioned chaos contributed to the difficult birth of the Geneva III negotiations to solve the Syrian crisis. The negotiations were postponed more than once, from February to April, as some factions of the Syrian opposition suspended their participation, while United Nations envoy to Syria Staffan de Mistura unsuccessfully tried to convince them to attend.

Subsequently, following the failure of the first round of Geneva III negotiations that began on April 22, the truce, which went into effect in February in Aleppo between regime and opposition forces, collapsed with a series of attacks by unknown factions that Human Rights Watch believed to be Syrian regime forces and armed opposition fighters. The attacks left 89 people dead and 135 wounded, not including more than 50 people who died in the shelling of the Aleppo hospital.

Egypt restricted its reaction to the failures, addressing only the UN Security Council, where its UN ambassador, Amr Abu Atta, called for an end to what he described as “the reluctance of countries to confront terrorism, [Jabhat al-Nusra] and their allies in Syria.” He said Jabhat al-Nusra had exploited the cease-fire to expand its control over Aleppo territories where battles were waged between regime forces and armed factions.

Based on an Egyptian proposal, the Security Council adopted an official press statement May 12 expressing “outrage at all recent attacks in Syria directed against civilians and civilian objects including medical facilities.” The council did not, however, mention any specific steps that international coalition countries pledged to take to combat Jabhat al-Nusra and IS in Syria — despite Abu Atta’s statement about the “reluctance of some countries.”

Based on the above, it would seem that the Egyptian leadership exaggerated the reluctance of some countries, or perhaps actually sensed some real reluctance but did not expect its statement or role in the Security Council to have any effect on the actions of those countries. Egypt may have seen the statement only as an expression of deep regret for the plight of civilians in the hopes of garnering support from the Syrian public for any future Egyptian participation in military operations against terrorism. It also might have hoped to gain support for any diplomatic efforts it might undertake to convince countries not to interfere.

Bahaa el-Maghawry, former political science professor at Cairo University, agreed with this analysis. Speaking to Al-Monitor, he said, “Naturally, there is reluctance on the part of some countries. The Russian airstrikes that began in September 2015 have had an unmistakable impact on [IS] and [Jabhat] al-Nusra and are testament to the fact that countries of the international coalition have been significantly sluggish in executing strikes of this magnitude, particularly considering that among key coalition members are countries such as Turkey and Qatar, known for their past support for [IS]. Through the statement, Egypt tried to gain Syrian support and express a clear stance regarding the plight of civilians in Syria.”

“However, I do not expect Egypt to intervene militarily, but to content itself with convincing certain countries, such as Russia, of the need to soldier on, while giving … support by providing them with available intelligence information, or convincing other countries to refrain from certain types of military intervention, as it did with Saudi Arabia — with said diplomatic efforts hinging on the interests that Egypt shares with some countries.”

When asked why he ruled out military intervention, Maghawry said, “Egypt is not an ally of [Syrian President] Bashar al-Assad’s regime, and any military intervention, even if only by air, would thrust Egypt into a confrontation and maybe even direct clashes with opposition factions. … Any real attempt at combating terrorism represented by [IS] and [Jabhat] al-Nusra would be impossible to achieve without causing casualties among Syrian opposition forces.”

The Russian Foreign Ministry said April 25 that Foreign Minister Sergey Lavrov emphasized to his American counterpart Secretary of State John Kerry the need to have Syrian opposition forces withdraw from IS areas and block reinforcement avenues to extremist factions.

In a May 17 statement, the Syrian Support Group — which includes Lavrov and Kerry, as well as UN envoy de Mistura — called on Syria’s opposition to renounce IS and Jabhat al-Nusra. Lavrov noted that some factions that had previously been part of the truce later agreed, with Jabhat al-Nusra, to execute military operations in a clear breach of the truce.

It is unlikely that Egypt will adopt a clear position on the Syrian crisis by backing Assad or the opposition, either politically, diplomatically or militarily, particularly in light of the overlap in territories controlled and some policies between some opposition groups and terrorist organizations. Thus, Egyptian support for Assad or the opposition would be detrimental to its interests for two reasons.

First, Egyptian support for Assad means supporting Iranian interests in Syria, among them the project to export Iranian gas to Europe through Syria once international sanctions are lifted, pursuant to the July 2015 nuclear agreement. These interests fall contrary to Egyptian ambitions to export gas to Europe, in light of the gas reserve discoveries to be announced once maritime border demarcation agreements are concluded with Saudi Arabia, Cyprus, Greece and other countries.

Second, any support to the opposition, on any level, even political, would be construed as a push to remove Assad, an Alawite Muslim. That could lead to the disintegration of the Syrian Army, in which three-fourths of officers are Alawite, according to research published in December 2014 by London’s Al-Hayat newspaper. Also, most opposition leadership figures are Sunni or belong to other sectarian minorities. If the Syrian Army collapses, its weapons could be seized by IS or Jabhat al-Nusra, presenting a threat to Egypt and the whole region, as Egyptian President Abdel Fattah al-Sisi stated in a September interview with CNN.