'Regime Can’t Go On Like This,' Says Syrian Opposition Leader

Cengiz Çandar talks with Sheikh Moaz al-Khatib, leader of the National Coalition of Syrian Revolutionary and Opposition Forces, about the roles and interests of the United States, Russia and Iran in Syria and his efforts to arrive at a solution to the crisis. 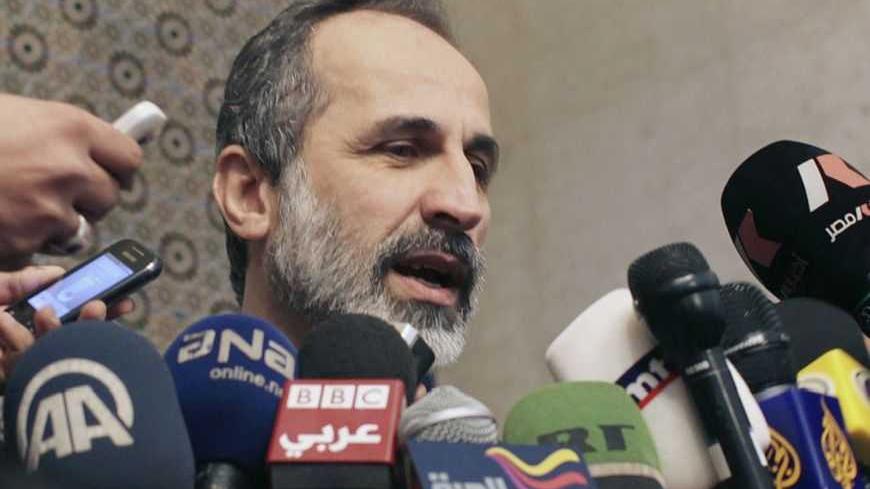 Moaz al-Khatib must be the head of a political organization with the world’s longest name — the National Coalition of Syrian Revolutionary and Opposition Forces. Because the name is so long, its members and president refer to it simply as the Coalition. In Arabic, it would be Etilaf.

The name of the Coalition's leader is at least as long: Ahmed Moaz al-Khatib al-Hassani. He is addressed, for short, as Sheikh Moaz. “Sheikh” is an honorific for religious officials, and Sheikh Moaz is an interesting man of religion. He once served in Damascus in the prestigious position of imam of the Emevi Mosque, which has a prominent place among Islamic institutions worldwide. Born in 1960, Sheikh Moaz hails from a family that can claim to have a number of Emevi imams as members, including his father. Although he is known as a scholar who taught theology, his real profession is geophysical engineering. Khatib worked for six years in the Syrian section of Royal Dutch Shell. He speaks English and can express himself in that language on a file of political issues as complicated as Syria.

Coalition officials recently met with four Turkish journalists in a hotel near the Istanbul airport that was used as the headquarters of the Syrian National Council (SNC) until the formation of the Coalition in Doha in November 2012.

In addition to Sheikh Moaz, Monzer Makhous, from a prominent Alawite family from Latakia participated in the conversation, which lasted more than three hours. The fact that a notable personality of the Alawite community, the base of support for the regime of Bashar al-Assad, was sitting alongside a Sunni religious personality was in itself telling.

Makhous is the first ambassador of the Syrian opposition and a geophysicist as well. Photographs of him presenting his letter of accreditation to French President François Hollande is remembered well by newspaper readers and TV watchers. Although Makhous is introduced as “ambassador,” it is not clear whether he is part of the corps diplomatique of Paris. In fact, nothing is clear about Syria. Nevertheless, the two Coalition officials made firm assertions about their country. The Alawite geophysicist has been in exile since 1970, and the Sunni one has lived outside Syrian since July 2012. Their perspectives must be taken into consideration.

Both underscore that Assad cannot establish an Alawite state. Makhous argues that the majority of Syrian Alawites are against such a move. Sheikh Moaz served as a soldier in Jabal Alawiyyin, the Alawite heartland, and says he knows Alawites well. He avers that most of them are poor people who have suffered under the regime. He says he used to cry when he saw their despair, and then he offers a political reason why an Alawite state is unlikely: “As long as Bashar controls Damascus, he has no reason to think of a separate Alawite region along the coast. He will think about it as the last resort, only if he loses Damascus. He will then opt to break apart Syria and set up an Alawite state.”

Sheikh Moaz recently met with US Secretary of State John Kerry and with Russian Foreign Minister Sergei Lavrov. He has some pointed impressions on the Syria policies of Washington and Moscow.

He believes that for the United States, Israel’s security overrides everything else in the Middle East, and its approach to Syria is based on this priority. He also thinks that the Americans have three obsessions that impede their granting adequate assistance and support to the Syrian opposition.

Isn’t Sheikh Moaz himself worried about this third point?

First of all, he responds on the concept of the jihadist, emphasizing the special and distinguished place of the concept of jihad in the Muslim faith. The label “jihadist” reflects the prejudice of the West and an Orientalist negativity. Alluding to Americans, he sarcastically says, “The Westerners are more concerned about the length of our beards than the human suffering in Syria.”

He thinks the armed forces he calls Salafists, not jihadists, could be integrated into the opposition through dialogue. Furthermore he insists that Syrian society will not tolerate “extremist Islam,” but would accept moderate Islam. He uses egalitarian language in reference to minorities, including the Alawites, and insists that anything that would impair the unity of the Syrian people and the territorial integrity of the country is a “red line” that cannot be crossed. Whether such remarks will appease the minorities remains unknown, but it undoubtedly facilitates his acceptance as a partner for dialogue by his Western interlocutors.

Sheik Moaz’s assessments about Russia are particularly interesting. He says Moscow fears the disintegration of Syria should the regime be deposed and cannot identify a leader capable of keeping the country intact in such a situation. He adds, “Nevertheless, Russia has no intention of entering into a fight for this regime. Moreover, they know well that the regime can’t go on like this.”

In that case, how can he explain the Russian support for the regime?

“They are trying to gain time for themselves and the regime. They want to give a last chance to the regime, to show whether the Baath regime can survive.”

While relaying his impressions, the Syrian opposition leader notes that Assad has not given up on regaining dominance and charges that Russia and Iran, recalling their own experiences, are giving Assad “wrong advice.”

“Russians remind him of their Chechnya experience and the battles for Grozny. Iranians tell him how they suppressed the Green Revolution that emerged with massive public protests after their presidential elections. Bashar — emboldened by these experiences and counting on weapons support he is getting from them — is not giving up his ambition of recovering his past power.”

I suggest to Sheikh Moaz that a stalemate exists with the inability of the opposition to topple Assad militarily and Assad’s loss of control over an important part of the country. He agrees.

In such a situation, does he still stick to his proposal for negotiations? And does this proposal entail “minus the regime’’ or “negotiation without preconditions”? To encourage him to reply, I tell him that his proposal obviously aims at ending the “humanitarian tragedy.”

He thanks me, but sticks to a vague response. To my question on negotiations with the regime with Bashar or without, he responds, “This is a technical detail. What is important is the acceptance of giving up power.” I persist. “Who is to give up power? Bashar or the regime?” He smiles. He knows that a clear and concrete response could cause cracks in the opposition and hurt his position. He evades a straightforward answer.

The next day, March 6, a headline in Milliyet suggests that Sheikh Moaz “favors negotiations with Assad.” I said to my Milliyet colleague who had been at the meeting, “With that headline, your paper’s editorial board would fail at any exam for correct and reliable journalism. What if the international media quotes your paper?” He did not object.

Did Iran figure at all in our long conversation?

It did. Sheikh Moaz, while indirectly claiming that “there is no question of a civil war or sectarian war at this point and, God willing, will never be,” prefers to describe the current situation as a cruel regime oppressing the population and forcing the people to take up arms after they first protested peacefully. He implies that Iran is lending the most support to Assad for turning the conflict in Syria into a sectarian war.

At this stage Makhous joins in, stating, “I know Russia well. I know how their minds work. I studied and lived there for years.” After all, he is a nephew of Ibrahim Makhous, the radical foreign minister of the Salah Jadid government overthrown by Hafez al-Assad in 1970. “Russia’s problem is not the current regime or their base at Tartus. The Russian approach to the Syrian issue is derived from their perspective of the Arab Spring. They see the Arab Spring as a process that brings the political Islamist current to power and fear this current could move to Caucasia, Chechnya and Dagestan and from there spread to central Asia. Their approach to the Syrian issue is based on their own security perspectives.”

The most practical outcome of this long conversation with Syrian opposition leaders was to learn that the road in Syria remains long.

Cengiz Çandar is a contributing writer for Al-Monitor's Turkey Pulse and senior columnist of Radikal in Istanbul.