With its success in Tripoli, the Lebanese army is proving itself as the only military institution in the state able to confront terrorism. 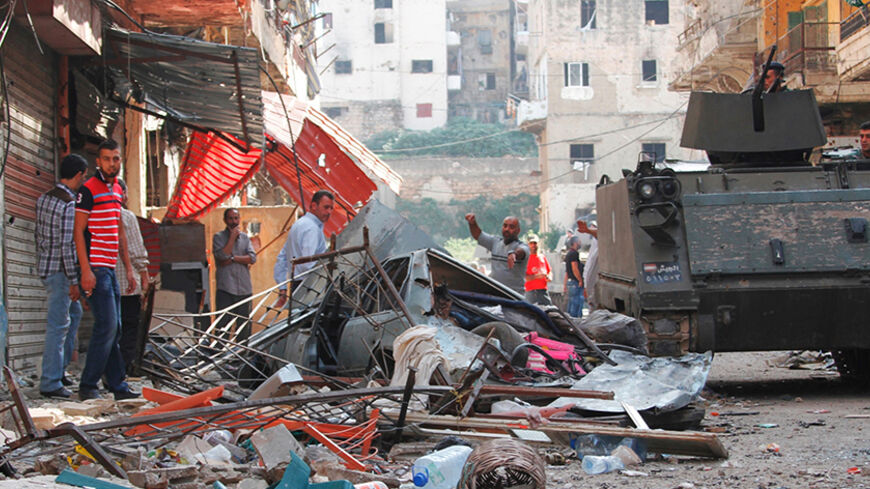 The Lebanese army has succeeded in securing the city of Tripoli following the widespread emergence of Islamist organizations and movements there in the absence of the state and its institutions. The step was lauded by all political parties as a chance for the Lebanese army to show its readiness to fight terror organizations. Its strength was boosted by some recently acquired capabilities in addition to its accumulated expertise since the unrest of Nahr al-Bared in May 2007, the first confrontation between the army and terrorist organizations.

The recent security events have undoubtedly confirmed that the Lebanese Sunni community — particularly in Tripoli — does not offer fertile soil for terrorism. However, this does not mean that Lebanon is safe from the dangers from the east, coming from countries such as Syria and Iraq.

A well-informed military source affiliated with Hezbollah, which is also fighting these jihadist organizations at home, in Syria and in the Bekaa Valley, told Al-Monitor on condition of anonymity, “Today, one can confidently say that the Lebanese army is the most powerful force on the ground.”

He added, “How did Hezbollah benefit from its missile arsenal in its battle against Jabhat al-Nusra and other jihadist factions? Hezbollah has spent years preparing for a certain type of battles, and today it is facing a battle on a completely different level. The party used to lead guerrilla wars against Israel, while today these same wars are being waged against it. … The party has lost to a great extent the freedom to take an initiative and make a choice on the battlefield.”

Citing the tremendous losses Hezbollah has incurred in Syria, the military source explained that Hezbollah has so far failed to decisively settle the battles in Qalamoun and Qusair, and is unable to control the eastern border. This is especially true since the party used Palestinian fighters affiliated with the Popular Front for the Liberation of Palestine-General Command ( PFLP-GC) to help it control the border in the area of Kosaya. This is a clear violation of the motions that were unanimously approved at the dialogue table in the first session in 2006, which stipulated that Palestinian weapons outside the camps ought to be controlled.

There are many factors, he said, behind the effectiveness of the Lebanese army. Most importantly, the army is able to move swiftly in its 266 Humvees between the months of April and June through the US aid program. Artillery weapons have also contributed to this strong position. The army’s artillery is more effective than missiles, being more accurate with greater destructive capabilities. The air force is another crucial factor, the source said. It should be noted that the Lebanese army has recently received from the United States Cessna Caravan jets designed for fighting terrorism and equipped with Hellfire missiles. All this armament has significantly reinforced the army’s abilities, especially those of its special forces, which are highly trained to combat terror.

The source also spoke about the speed at which the army’s Airborne Regiment managed to regain control over areas in Arsal with no injuries in its ranks after the sudden attack on it in August.

There is no doubt that the national military institution is the only force that has the right to pick up arms, impose security and control the border. The recent events in Arsal and Tripoli have proved that the legitimate military institution is the most qualified to confront jihadist organizations. Any other weapons, especially those owned by a party affiliated with a certain sect or regional party, as is the case of Hezbollah, would only add fuel to the flames.

In fact, the Islamic resistance under which Hezbollah operates is now regarded by its former supporters in the Arab world as a Shiite militia, especially after its involvement in the Syrian crisis.

Finally, the people of Arsal and Tripoli, who are mostly Sunni, have proved that they do not support terror. On the contrary, they warmly welcomed the intervention of the Lebanese army and were the first to demand that it impose security. Although they had some reservations and reprimands for some of the army’s officials, when the time came to choose between the army and the jihadist organizations, they chose the military institution in a heartbeat.

The pertinent question now is: What if they had to choose between Hezbollah and another sectarian faction? There should be a withdrawal by Hezbollah from Syria in a first stage, followed by building a state with full functioning institutions and exclusive control of weapons.