Iraqis show their love on bridges

The love padlocks on Pont Des Arts in Paris has inspired young Iraqis to show love for their sweethearts with padlocks on bridges, but not everyone approves. 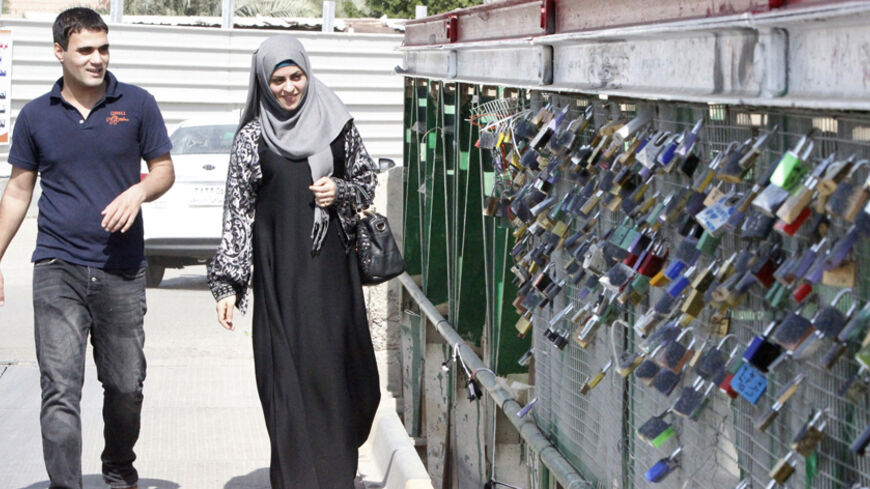 A couple walks on a bridge covered with padlocks hung by lovers in Basra, Oct. 21, 2014. - REUTERS/ Essam Al-Sudani

BABIL, Iraq — Sarmad Blaibel, a young reporter who works for the local news station, went to a bridge in the city of Babil to hang a love padlock and throw the key into the river as an expression of love for his sweetheart. This act resembles the well-established tradition in France, for instance, where railings of the Pont Des Arts bridge, overlooking the Seine, have been damaged by the increasing weight of love padlocks.

Blaibel, who covers news of the fighting in the city of Jurf Al-Sakhar, inspired other young people to follow suit. Young couples turned one of the bridges in the city of Hilla, in the center of the province of Babil, into a place of pilgrimage for sweethearts, who put love padlocks on the bridge and threw the keys into the Euphrates River.

Blaibel encourages placing love padlocks on the bridge, and said in an interview with Al-Monitor, “We do not want the Iraqi citizen to lag behind modern and contemporary societies.”

“This activity and other events that we organize daily in the city of Babil represent our strong inclination toward continuous development. Our activities are an expression of freedom and an objection to any brutality that tries to kill human talents,” he said.

According to Blaibel, who recently issued a book of poems, the Bridge of Love initiative did not get the local government’s support, as the group works outside the scope of power and the government since it believes that a genuine and active intellectual person is the one who lays the foundations for new aesthetic landscapes, who fights those seeking political positions and always sides with the people.

He said that the bridges adorned by love padlocks give him a real sense of happiness, since they reflect the extent of individual Iraqi interaction with beauty, music and love. “All these initiatives point to life, not to death and destruction and booby-trapping."

One of the organizers of the event, Ali Salimi, told Al-Monitor how a religious figure from the Risali movement, which has a military wing, said, “This initiative is haram and offensive to Islam.”

However, Salimi and his group were acting within the law, since they obtained the approval of the Basra Provincial Council, the Municipal Directorate and the Department for Roads and Bridges, thus enjoying the protection of the local government.

Salimi, a resident of Babil who teaches at the University of Baghdad's faculty of arts, was surprised how popular this initiative was among a group of young men, some of whom were no older than 20.

He added that the initiative is the beginning of liberation from the constraints imposed on Basra. “We are trying to change Basra and Iraq’s tense environment due to the political situation.”

In conjunction with the escalating violence in Iraq, young Iraqis seek to face the rampant culture of death by launching initiatives that promote peaceful coexistence and renounce violence and the fierce sectarian conflict.

Hassan Sabahi, a student and one of the organizers of the Bridge of Love initiative in Basra told Al-Monitor, “The majority of the community in Basra welcomed the 'bridge of love' with the usual humor of Basra citizens.”

He said this initiative will unlock some restrictions imposed on Iraqi society. “This will be done in accordance with peaceful coexistence, ethical controls and social norms.”