Jewish monuments in Iraq are numerous and make some Iraqis nostalgic for the time when Muslims and Jews were neighbors. 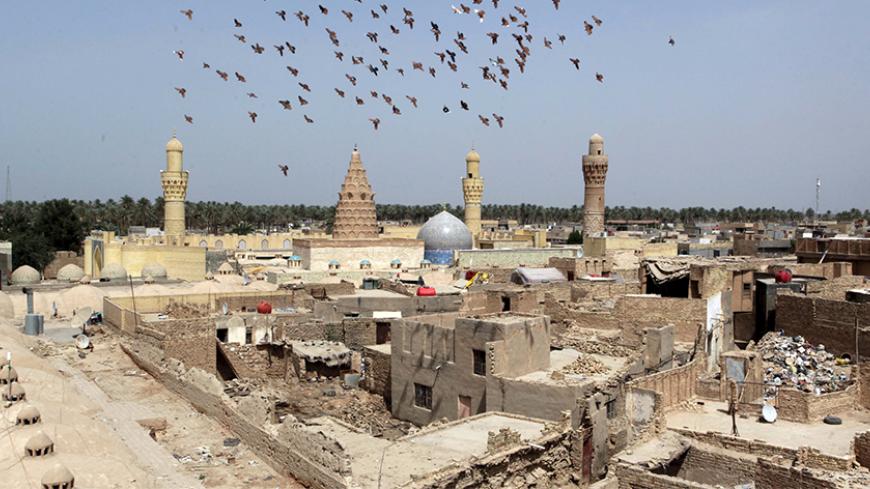 A general view shows the shrine containing the tomb of the Jewish Prophet Ezekiel in the Iraqi town of Kifl, south of Baghdad, March 25, 2015. - REUTERS/Alaa Al-Marjani

BAGHDAD — In Baghdad’s Sadr City lies a cemetery of some 4,000 Jewish tombs and graves. There are only a few visitors, and silence predominates. Most of the Jewish families who buried their dead in the cemetery's five dunams (1.2 acres) left Iraq during 1950-51. In July, Ali al-Allaq, a member of the parliamentary Religious Endowments and Affairs Committee, had reported that only nine Jews remained in Iraq. In 1941, they had numbered some 130,000. Commenting on the small number of Jews left in 2008, Stephen Farrell wrote in The New York Times, “In the city that was once the community’s heart, they cannot muster even a minyan,” referring to the group of 10 men needed to perform certain rituals.

In June, committee Chairman Abdel Azim al-Ajman said that representatives of Iraqi Jews had held meetings with parliamentarians to discuss the issue of Iraqi social peace. Talking about Iraqi Jews remains a sensitive matter in Iraq even though the current political turmoil has strengthened Iraqis’ nostalgia for a past when Muslims and Jews lived as neighbors.

Inside the rusty gate of the Jewish cemetery, seldom used footpaths wind around Hebrew-inscribed tombs made of cement and sand and now covered with dust. “Some Muslims visit the cemetery seeking the blessing of a holy man buried here known as Mr. Blaibel, whose lineage is said to go back to the Prophet Moses,” Umm Essam, a 65-year-old Muslim woman, told Al-Monitor. “I visit this place every now and then to light candles. There are Muslims who visit [Blaibel's] grave because it grants a lot of their wishes.” Although a controversial issue in Islam, visits to graves of figures considered to be holy is a common practice. Moses is a prophet in Islam, so his descendant, Blaibel, would be of importance to Muslims who make such pilgrimages. It is believed that these figures help prayers be answered.

Umm Essam is an example of the old Iraqi spirit of coexistence, which stands out in these days of turmoil. Also crossing Iraq's religious divides is Ziad Mohammed, a Muslim who belongs to the family that oversaw the Jewish cemetery in the 1960s. When his father died in the early 1980s, Ziad inherited this responsibility. He guards the cemetery and helps what few visitors there are.

Mohammed told Al-Monitor, “Muslims visiting this Jewish cemetery exhibit the spirit of tolerance among the people of Iraq and the respect among people of different faiths. … Despite the apparent neglect of the cemetery, no one has violated its sanctity even during the sectarian strife of 2005-07. … An expatriate Jew visited the cemetery in 2003 after the overthrow of Saddam Hussein’s regime. He visited his family’s tombs and said that most Jews were afraid to visit Iraq both during the rule of the former Iraqi regime and now because of the volatile security situation in the country.”

Al-Monitor relayed this story to Haleem al-Yasiri, an Iraqi researcher and retired elementary school history teacher. He said, “The religious harmony that Ziad talked about passed through historical turns and political events that caused the religious hatred.” Speaking about “the spirit of revenge toward the Jews that prevailed in the Iraqi street after the founding of the State of Israel in 1948,” Yasiri explained, “They were displaced en masse in 1950 because they were thought to sympathize and support the occupation of Palestine by members of Zionist and Jewish organizations.”

Nazir al-Asadi, a social worker from Babil, described Iraqi Jews to Al-Monitor as “citizens who participated in building the country, and had their role in politics and the economy, and were skilled in politics and trade. They had their social and religious centers, shops, factories, land and farms.”

In addition to Jewish cemeteries and homes, many other Jewish landmarks can still be found in Iraq, including the tomb of the Prophet Zul-Kifl (Ezekiel), south of Babil; the Baghdad neighborhood called Torah Place, historically home to some of the city’s Jewish residents; the Temple Torah in Samarra, which was turned into a residence after its owners left for Israel in the 1940s; and the Temple Torah in the Ashar district of Basra, which was built in 1915. The shrine of the Prophet Daniel in Mosul was blown up by the Islamic State on July 23, 2014.

Most of the surviving monuments, all historical treasures, are being neglected. The large number of historical monuments of different faiths and sects represent Iraq's pluralistic national heritage. By reminding Iraqis of their common history, they could help override the recent religious and sectarian hatred.