Although the tomb of Jewish Prophet Ezra was turned into an Islamic landmark over the years following the Jewish exodus in the 1950s, clerics there say they are preserving the Jewish character of the shrine. 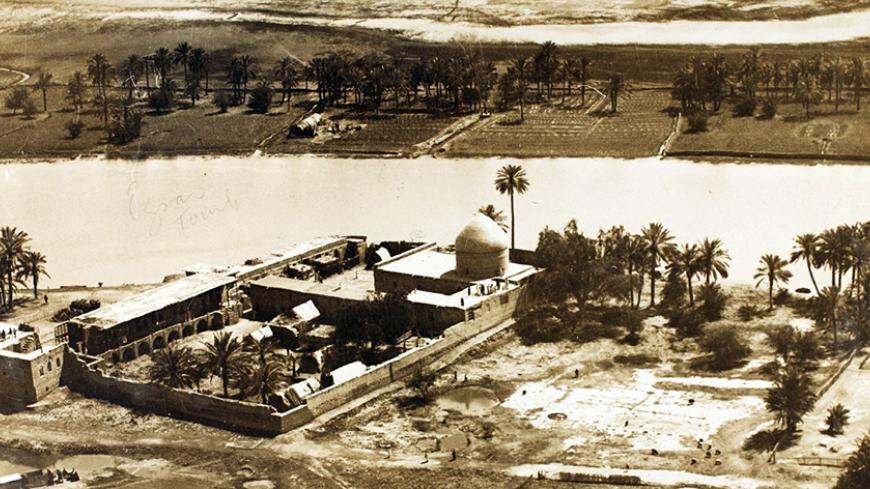 An aerial photograph from 1924 shows the tomb of the Prophet Ezra. The photograph was taken by Royal Air Force pilot Edwin Newman during his service in Iraq after World War I. - Flickr.com/Edwin Newman Collection

UZAIR, Iraq — Jews reportedly built the tomb of the Prophet Ezra in Iraq in the fifth century, and the site has undergone many changes since.

The tomb is in the town of Uzair, which is the Arabic version of the name Ezra, and the shrine has taken on many Islamic aspects. The shrine contains Hebrew scriptures and Jewish symbols, and Quranic verses and Islamic inscriptions. It was turned into an Islamic landmark following the mass exodus of the Jews of Iraq to Israel in the 1950s.

Iraqi journalist and author Abdulhadi Mhoder found in this area a symbolic harmony between Islam and Judaism. He told Al-Monitor that this harmony “reflects religious tolerance and confessional coexistence in Iraq."

He said, “This harmony can also be seen in the tomb of Jewish Prophet Dhul-Kifl [Ezekiel] in Babil, which Muslims still visit.”

An Iraqi Jew who lives in the Iraqi Kurdistan Region stirred controversy a year ago when he told Al-Araby al-Jadeed newspaper that “the Shiite endowment’s takeover of the Prophet Ezra’s Tomb and a Jewish shrine beside it is a Muslim persecution of Jews.”

Al-Monitor asked cleric Ali al-Mhamadawi, one of the supervisors of Ezra’s tomb, about the issue. He denied the statement of the Jewish man, who had spoken to the newspaper on condition of anonymity.

“Muslims are the ones who took care of the place and rebuilt it after it was deserted following the Jewish exodus from the city,” Mhamadawi said. “These accusations are refuted by the fact that Islam considers Ezra a holy prophet, as he was mentioned in the Quran. That is why religious rituals are held in his shrine.”

He added, “Jews can visit the shrine; they are always welcome.”

Al-Monitor asked Mhamadawi about stories in the media claiming that the Muslims overseeing the place had deliberately removed all Jewish symbols and replaced them with Islamic verses.

Mhamadawi did not answer the question. Instead, he pointed out Jewish symbols and Hebrew writing on the walls of the hall and on a hanging plate. He said, “If we wanted to erase them completely, nobody could have stopped us. But we respect other religions.”

He admitted that “some Jewish [symbols], including the Star of David, were removed in the 1980s unintentionally during maintenance operations that the Ministry of Awqaf [Ministry of Endowments and Religious Affairs] conducted during Saddam Hussein’s era.”

There was no trace of Ezra’s story in the shrine. Instead, Islamic books, written prayers and photos of Shiite figures filled the place. Ezra lived from about 480 to 440 B.C.

Some Muslim Iraqis still have good memories about the Jews who lived in Iraq until the 1950s. The ancient conflict was replaced during that time with peace and cooperation. Ali al-Saadi, a teacher who was born in Uzair and is interested in its history, told Al-Monitor that the senior citizens of the city still remember the names of dozens of their Jewish neighbors. He confirmed that Jews and Muslims lived together in peace and that Jews freely practiced their religious rituals.

Jews lived in Iraq more than 2,500 years ago in Babil, Baghdad and Mosul, among other places. But in the 1940s and 1950s, they were the victims of theft and murder, and they left the country for two reasons. First, they thought that the 1941 Iraqi coup d’etat happened in collusion with the Nazis. Second, Iraqi Jews faced a wave of anger in the wake of the global Jewish emigration to Palestine to build a Jewish state. Most of them were displaced between 1949 and 1950 after Israel was established.

Saadi said, “Jews owned houses and green fields that surrounded the shrine. These are still officially registered in their names in the real estate departments, although Jews are no longer present in Uzair. These houses have a special architecture characterized by wooden ornamented columns and oriels [bay windows].”

The shrine of Ezra has withstood centuries in an area inhabited by a deeply religious Shiite majority, unlike a nearby school that was once a synagogue. "Its landmarks have been completely altered," Saadi said. "It included an underground vault that was demolished in the 1980s during maintenance operations conducted by the Ministry of Awqaf.”

At the shrine, there are some eroded Jewish inscriptions exposed to neglect and unfavorable weather conditions. These inscriptions are endangered unless they are given appropriate care. At the top of the main entrance is an ancient corroded silver plate inscribed with Hebrew words.

Islamic symbols completely dominate the place. Umm Hassan, who was visiting, did not know about its Jewish history. But she was certain that it is linked to numerous healing miracles, and many Muslims here share this faith.

Al-Monitor talked to author and researcher Ali Hasan al-Fawwaz about the shrine. He said, “People visit the place because of their attachment to religious sanctities. Even if Prophet Ezra was a Jew, he is part of the collective conscience of the followers of monotheistic religions such as Islam and Judaism, which honor the savior.”

The place today is a religious destination that may be restored as a tourist attraction, especially for Iraqi Jews who emigrated and are nostalgic about their history. Uzair city will surely benefit from this restoration to boost its religious tourism.

Wissam Jaliham, a member of the Maysan provincial council, told Al-Monitor, “The people of the city welcome Jewish visitors to this shrine, although it was transformed into an Islamic landmark.” He noted that a reconstruction plan carried out by the local government in Uzair in coordination with the Shiite endowment directorate is underway to salvage this shrine’s Jewish and Islamic features.