The tomb of the Prophet Ezekiel, located next to a mosque in Kifl, Babil, is a site of both controversy and religious coexistence. 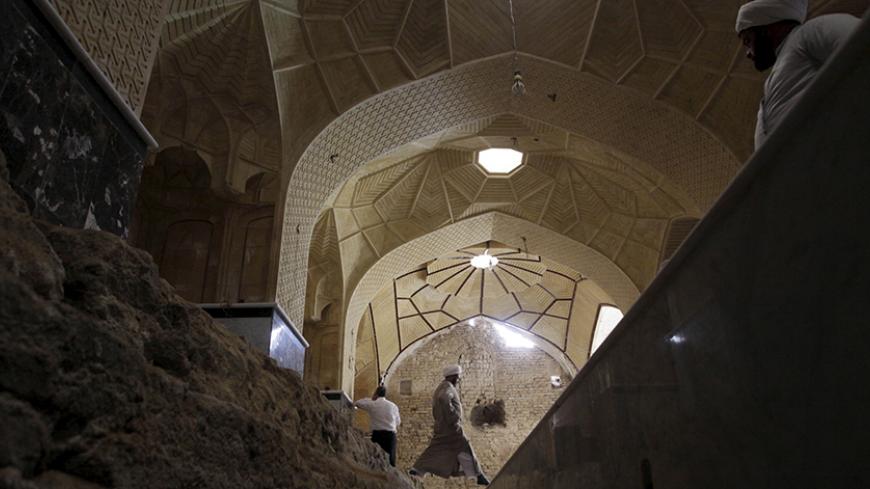 A man walks inside the shrine containing the tomb of Jewish Prophet Ezekiel in the Iraqi town of Kifl, south of Baghdad, March 25, 2015. - REUTERS/Alaa Al-Marjani

There is a spot in the city of Babil that highlights the simultaneous overlap and struggle of religions. The Kifl area includes the tomb of the Prophet Ezekiel (Zul-Kifl), one of the prophets of Israel, as well as al-Nukhailah mosque, visited by Muslims. It is also the place where the fourth successor of the Rashidi Islamic era, Ali ibn Abi Talib (599-661), settled for a period.

Today, the Islamic Shiite Waqf is the official body overseeing both the Jewish shrine and the mosque. Israel Today reported in December that the tomb of the Prophet Ezekiel had been converted into a mosque.

Al-Monitor checked the official website of the Shiite Waqf Council, which categorized “the Ezekiel shrine” as a Shiite Islamic shrine and published a report that read, “Before their migration from Iraq in 1941, Iraqi Jews tried to obliterate Islamic writings from the mosque located in the same place to replace them with Hebrew phrases.”

However, the Jewish organization Nahum, which strives to return the properties and funds of the Jews who emigrated from Iraq, contradicts the viewpoint of the Shiite Waqf. In 2012, the organization called to halt the demolition of the tomb of the Prophet Ezekiel. The organization also called for the prevention or removal of Hebrew graffiti and inscriptions from the shrine.

According to historical documents, the Prophet Ezekiel had been in Iraq during the first Babylonian exile of the Jews in 597 B.C., and stayed in Babil until his death. Jews in Babil sanctify his grave, which was one of their major shrines before their emigration from Iraq.

Al-Monitor contacted writer and journalist Abdul Rahman al-Majedi, who visited the province of Babil during his participation in the Babylon Festival of Cultures and Arts in April 2014. Majedi said that witnesses from the area of the shrine told him that some of the Hebrew writings had already been removed from the minaret and replaced by Quranic verses and a picture of Mecca.

Sheikh Majid al-Kalabi, who lives near the Kifl area, told Al-Monitor, “The land registry records in the province of Babil confirm that most of the buildings and shops surrounding the Ezekiel shrine belong to Iraqi Jewish families.” According to Kalabi, “This is evidence that the authorities in Iraq did not manipulate the origins and history of the place.”

For his part, author Salah Hassan, who is interested in Iraq’s monuments and history, told Al-Monitor that during his visit to the site, he “noticed that the Hebrew writing is still prominently visible on the walls of the shrine.” Hassan said, “The Prophet Daniel’s name was written next to the tomb of Ezekiel because he was a core supporter of his, and the adjacent popular market was named after the Prophet Daniel thousands of years ago.”

Al-Monitor visited the site and found ongoing renovation works. The area, which includes the graves of holy Jewish figures, has been well preserved by the Shiite clerics who manage it.

One of the supervisors refused to talk to Al-Monitor, saying, “This exceeds my competence, so I prefer not to answer many questions, given the wide controversy going on around the place and because a lot of newspapers, especially foreign ones, do not convey the truth about it.”

Author Alaa Cooley told Al-Monitor, “There are concerns over the renovation of the site, as some Jews [outside of Iraq] believe that this will lead to the Islamization of the place and the removal of Jewish historical landmarks. The Kifl area is not inhabited by a single Jew. Consequently, the presence of a mosque next to it will necessarily lead to the dominance of Islamic monuments.” Cooley added, “Had the place not been renovated, there would have been reports of the Iraqi state neglecting it because it is a Jewish landmark.”

Writer and historical researcher in Iraqi affairs and folklore Ali Abu Iraq told Al-Monitor, “Regardless of the validity of the dispute between Jews and Muslims, both the Ezekiel shrine and the adjacent mosque show religious and ethnic diversity in Iraq and show that it is a country of religious coexistence.” He added, “A lot of Iraqis are visiting religious shrines regardless of whether they are Muslim, Christian or Jewish, and they were never hindered by religious and sectarian constraints.

“The most beautiful trips are the ones we pay to the Prophet Uzair in the southern city of Maysan, and he is a Jewish symbol.”

Amid the raging religious and sectarian conflict in Iraq, maintaining a Jewish symbol within the Muslim community should be prioritized by the archaeological and religious authorities. The Iraqi authorities should encourage members of all religions, especially Jews, to visit this place and contribute to laying the foundations of peace and love among different religions and peoples.