The Mashhad al-Shams shrine, once a temple of the Babylonian sun god, has been turned into a mosque where the pious go in search of miracles. 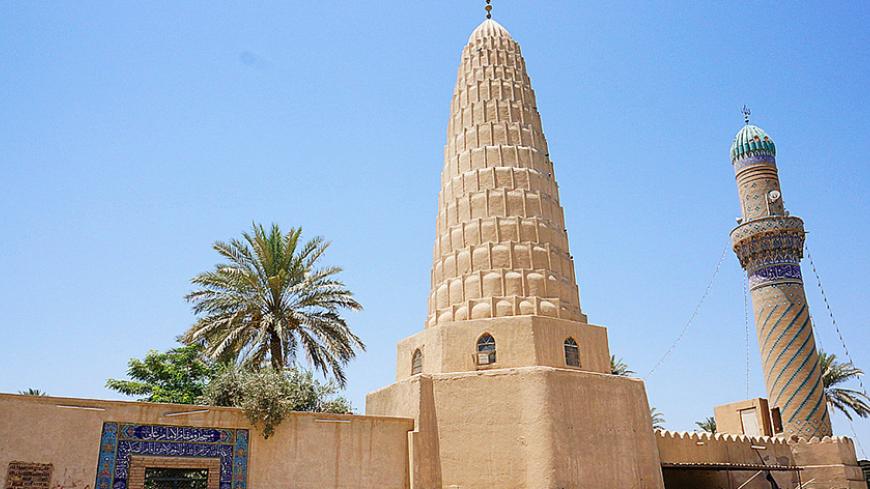 The Mashhad al-Shams shrine in Hillah is a remnant of Iraq's Babylonian heritage that became a Shiite site of worship. - Hajj.ir

HILLAH, Iraq — Each year for the Feast of the Sacrifice (Eid al-Adha), Umm Mariam visits the Mashhad al-Shams shrine in Hillah to decorate its walls with henna. She told Al-Monitor that the shrine had cured her daughter of a chronic illness after she slept there one night. Some believe the shrine also has the power to solve social problems and make infertile women able to bear children.

It is traditional for visitors to frequent the historical shrine, about 60 miles south of Baghdad, and pray for God’s blessing. What is interesting about this particular place, however, is that it has not always been Islamic. The shrine once served as a temple of Shamash, the sun god, during the First Babylonian Dynasty. Based on the monotheistic principles of Islam, the shrine's prior history would ordinarily make it a symbol of idolatry and polytheism, which contradict the principle of oneness. The Arabic name “Mashhad al-Shams” means “emergence of the sun,” but otherwise, the monument lacks any traces of its Babylonian heritage. In fact, as far as many visitors know, the Hillah monument is purely Islamic.

“The monument is a rare, if not unique, case given the mixture it exemplifies between the pre- and post-Islamic eras,” Karim Saadi, a history teacher in Babil’s junior high school, told Al-Monitor. “This monument — which is about 3 kilometers [1.9 miles] away from the historic city of Babil — is not an Islamic shrine but an 'adad,' which is a Babylonian temple where spiritual rituals were conducted. While Babylonians worshiped the sun there, Muslims established a link between the temple and Islam after the fourth caliph of Islam, Ali ibn Abi Talib, prayed and stayed in it for a period of time during [mid-seventh-century] wars.” Ali, for whom Muslims also pray at the shrine, is considered by Shiites to be the rightful successor to the Prophet Muhammad.

Unlike many Iraqi monuments that today suffer from neglect and a lack of visitors, Mashhad al-Shams sits in a garden of grass and palm trees and is packed with tourists and locals praying for God’s blessing. As Babil province is majority Shiite, there are green flags throughout the site, and the entrance is lined with photos of Shiite imams and signs indicating that Ali had prayed here. Many women spend an entire day in the shrine praying, while youths might perform their noon prayers there.

After Ali al-Husseini, a college student, finished his prayers at the shrine, he spoke to Al-Monitor about its importance to him. “I am well-aware that this site is an extension of the monuments of Babil,” he said. “However, the space's sacredness, derived from the link it has with an Islamic event — the Shiite Imam Ali ibn Abi Talib’s stay there — has superseded its importance as a historic Babylonian monument.”

Husseini added, “The place is therefore continuously renovated by donors and volunteers, who help with reconstruction and reforestation. It is even expanding as the number of visitors increases by the year.”

Suhaila al-Khikany, a Babil province council member, told Al-Monitor that the religious and historic landmark has increased Hillah's popularity. “I am proud of this mixture of a Babylonian temple and an Islamic mosque, which turned the place into both a touristic and religious destination,” she said.

Mashhad al-Shams is classified only as an Islamic Shiite shrine and is therefore the property of the Shiite endowment, or waqf, in Babil, according to Abbas al-Shilah, supervisor of the shrine through the endowment.

Shilah pointed to a green hall where paintings of Shiite imams and Quranic verses hang on the wall. There is a circular area in the middle of the hall encircled by a meter-high fence, marking the place where Ali once prayed. That the monument is now a mosque makes it similar to many other pre-Islamic sites of various religions and civilizations that subsequently adopted Islam.

Also among such sites is the former temple of the storm god Adad in Syria, which became a church during the Roman invasion and then a mosque with the Islamic conquest of Damascus in 635. In August, Mahmoud al-Sayed, a historian at the Syrian Directorate General of Antiquities and Museums, told SANA, the Syrian news agency, that the Umayyad Mosque in Damascus had been an Aramean temple, where the god of fertility, thunder and rain was worshipped, before it became a church and then a mosque. Also, the tomb of the Prophet Ezekiel (Zul-Kifl) in southern Babil was originally a Jewish monument but is now classified as a Shiite mosque.

What has not changed in Mashhad al-Shams for thousands of years is its religious character. Families of people killed by the Islamic State have taken to visiting to ask God to have mercy on the souls of the victims. Women also pray for God to return their sons safely from war.