The Shiite residents of Babil keep visiting religious shrines as they believe in their healing character, although historical information contradicts their beliefs. 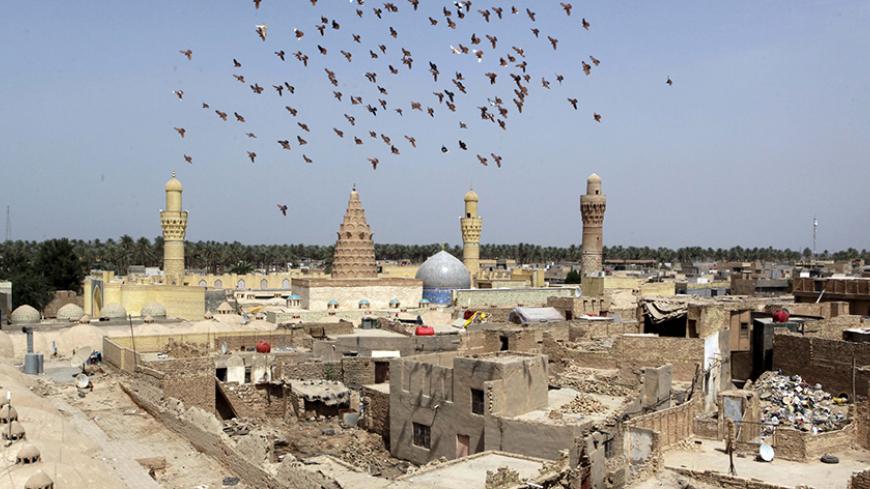 A general view shows the shrine containing the tomb of Jewish Prophet Ezekiel in the Iraqi town of Kifl, south of Baghdad, March 25, 2015. - REUTERS/Alaa Al-Marjani

BABIL, Iraq — Religious monuments, mostly shrines of historical and religious figures, are spread across Iraq. However, the Babil governorate (100 kilometers, or 62 miles, south of Baghdad) is unique, having a large number of prophets and saints’ shrines of different religions. According to the information engraved on every tomb, these prophets and saints had passed through, dwelled or died in the city.

In the city of Hillah, the provincial capital, lies the tomb of Nabi Ayoub on the Shatt al-Hilla, which is a branch of the Euphrates River. Nabi Ayoub is also known as Job in the bible.

A placard hanging on the wall inside the tomb says that Ayoub is the prophet mentioned in the Quran who existed about 2,500 years ago. He was known as the epitome of patience and endurance, and people followed his example.

Al-Monitor watched people visiting the premises, drinking and bathing in the water of a well nearby. An elderly woman with a cup of water in her hand to anoint herself told Al-Monitor, “God created this well under the feet of Ayoub, and it heals people.”

Although Ayoub was not a Muslim, Muslims make pilgrimages to visit his shrine, as he was mentioned in the Quran as being a prophet sent by God.

While people agree that Ayoub was a prophet sent by God, they disagree on where he dwelled. He has a shrine in Syria and Oman as well. Sheikh Ali al-Yasiri, a cleric supervising the premises, told Al-Monitor, “The prophet was born in Syria and immigrated to Iraq.”

There is no tangible proof of this, but Yasiri said, “[This is] historical information passed on from generation to generation.”

In the city of Kifl, about 30 kilometers (19 miles) from Hillah, lies the shrine of the Jewish prophet Dhul-Kifl, who arrived in Iraq during the first Babylonian captivity against Jews in 597 B.C. Muslims make pilgrimages to his tomb because his name was also mentioned in the Quran as a prophet sent by God.

Al-Monitor visited the site, which includes the shrines of other Jewish religious figures such as the tomb of Prophet Jonah, who was known to be among those who wrote the ancient Talmud, a collection of sacred texts given by God to Prophet Musa when he was on the mountain, according to Jews.

Hassan al-Maliki, a history teacher in the junior high school in Babil, told Al-Monitor, “[There is] no confirmed information about the history of these sites, but they have become sacred places because of their spiritual symbolism.”

He added, “The strong sense of religious faith is the main reason that drives people to visit these places, as opposed to other historical landmarks in Babil and Kish that do not hold any religious representation.”

Religious tourism is also common in other areas in the region, as is the case with the tomb of the Prophet Ibrahim in Borsippa, which is located between Kufa and Hillah. It was turned into a religious shrine topped by a green dome and visited by people as part of their religious pilgrimages.

The existence of this shrine is in conflict with historical information that Prophet Ibrahim was born in the city of Ur, in Nasiriyah governorate in southern Iraq.

Cleric Hamza al-Yasiri told Al-Monitor, “Prophet Ibrahim is the father of Islam, Christianity and Judaism. Although the house where he was born was discovered in the city of Ur, the stories circulating among people say he lived in this place.”

There is no historical evidence to prove Yasiri’s statement, but historical facts seem to be of no importance in the eyes of the people here.

The problem does not lie in the religious significance of these sites but in the fact that the majority of these religious landmarks are associated with Shiites who revere imams and religious figures in the form of shrines and tombs, unlike other branches of Islam — such as the Wahhabi sect prevailing in Saudi Arabia and the Gulf — that view this as a form of idolatry.

This explains the destruction of many tombs in the areas of conflict between Sunnis and Shiites, as is the case with the shrine of Prophet al-Khidr in northern Babil, which was destroyed by al-Qaeda militants in 2008. These groups believe that visiting tombs is a form of idolatry, while it was a prestigious religious shrine visited by many Shiites.

Cleric Omran al-Yasiri told Al-Monitor, “The miracles performed in the shrines are enough proof that it is the grave of Prophet al-Khidr. This is far more significant than any historical research about the place.”

Compared to other nonreligious, neglected historical landmarks and archaeological monuments that are affiliated with the Ministry of Tourism and Antiquities, these shrines are equipped and very well maintained with available services.

This is due to “social solidarity and donations of people to restore these places that represent a religious significance for them,” Suhaila al-Khikany, a member of the Babil provincial council, told Al-Monitor.

Cleric Saeed al-Moussawi told Al-Monitor, “Questioning the [authenticity] of these shrines is a conspiracy by takfiris who call for the demolition of religious tombs and graves, which is exactly what the Islamic State espouses.”

However, questioning the existence or authenticity of these shrines is a legitimate right of the people, according to a social worker who spoke to Al-Monitor on condition of anonymity. “Some people exploit religious faith to build fake shrines to save their own interests and make money,” he said, stressing that “religious authorities and leaders reject such allegations.”

Sheikh Mohammed al-Yacoubi said back in April 3, 2013, “Religious shrines have become widespread, without any verification or fact-checking of information.”

Regardless of the opinion of officials or religious authorities on these shrines, there is no denying that they have turned into religious tourist attractions for people in and outside Iraq. This should be a reason to push religious tourism in the country to generate further revenues to the state’s budget in light of the economic crisis caused by plummeting oil prices.