UNESCO's addition of Iraq's Khidr Elias feast to its Intangible Cultural Heritage List is reviving interest in the religious and social tradition. 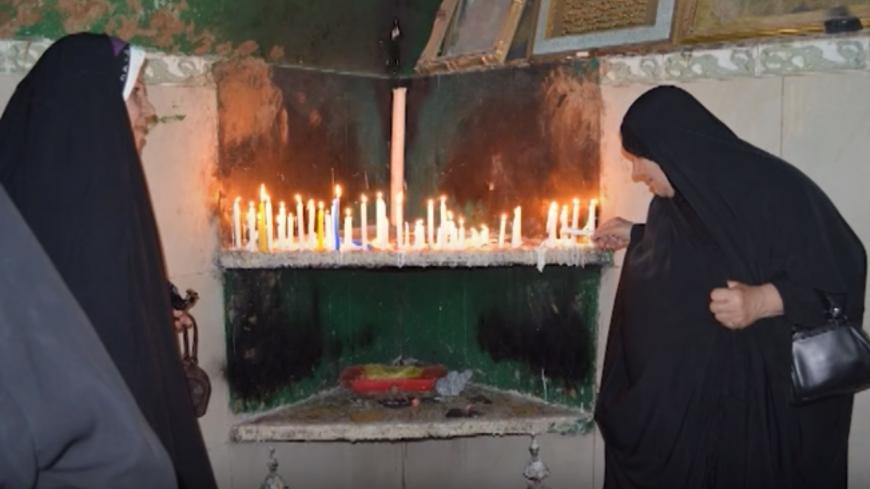 Women take part in a ceremony associated with the Khidr Elias feast in Iraq in this still from a video uploaded Dec. 1, 2016. - YouTube/UNESCO

BAGHDAD — City officials plan to renovate the Al-Khidr shrine in Baghdad now that UNESCO has added the Khidr Elias feast to its Intangible Cultural Heritage list. The Council of Baghdad is allocating funds from the 2017 budget to develop the shrine, according to Adel al-Saidi, a member of the council's Services Committee.

The project will include restoring and expanding the shrine, establishing service facilities and paving the road leading up to the shrine, in addition to designing and installing a garden there. "A national day for the festival will also be set for all Iraqis of different beliefs to celebrate it,” Saidi said.

Al-Khidr was a prophet, sometimes known as, or associated with, Elias/Elijah. Al-Khidr lived during the ninth century BC and was mentioned in the Quran and the Bible.

The Khidr Elias feast, a religious and social tradition in Iraq, is celebrated in February. The Iraqi Ministry of Culture had filed a request in February 2015 asking UNESCO to add the festival to the list. UNESCO did so Dec. 3, prompting a celebration of the long-awaited achievement. On Dec. 29, the Baghdad Literary Commission organized a boat trip on the Tigris River to Al-Khidr shrine, which is in the area between Baghdad's districts of al-Shawaka and Kadhimiya.

Shabib Midhati, a contemporary artist who works at the Ministry of Culture, participated in the outing. “This event contributes to the revival of this dying tradition. This would prompt the concerned parties, namely the Ministry of Culture, to take systematic actions to preserve and revive this tradition, as it has been practiced by all Iraqis, be it Shiites, Sunnites, Sabians, Christians, Jews and Yazidis for a long time,” Midhati told Al-Monitor.

Midhati noted the Khidr Elias feast reminds Iraqis "that they are one people.” He added that he had never visited the shrine before and was not aware of the details of the feast until it was added to the UNESCO list. “This reflects the neglect in introducing and highlighting the national cultural heritage among Iraqis themselves,” he said.

Abu Ali, a retired man who lives close to the shrine, told Al-Monitor, “I now visit the shrine regularly, after having witnessed miracles there. My son used to suffer from a severe depression. I came here to pray for [him] and now he has recovered.”

Faisal al-Khadimi, a trader, told Al-Monitor he visits the shrine several times a year, making vows and donating money to maintain it.

"I have been going on this pilgrimage since my early childhood with my parents, who have been visiting the shrine since the 1920s. Here, I feel closer to God and greater inner peace. All Iraqis, from all walks of life and all denominations and sects, come here to perform the same rituals,” Khadimi said.

He added, “The visit starts with lighting candles, surrounding a container where donations are placed. In return, visitors are offered green ribbons for blessings and to help them overcome difficulties and heal diseases. Visitors also [receive] blessings by bathing in the water surrounding the [shrine]." During weekends, which are Thursdays and Fridays, in Iraq, "People light candles and send them on wood along the Tigris River,” Khadimi said. “People never stopped visiting the sanctuary, as many have said that they had made vows and their wishes were granted.”

Umm Saeed told Al-Monitor, “I have been visiting the shrine for over a year and I still hope that my sick husband will be healed.”

There is also an Al-Khidr shrine in the city of Hillah in Babil, south of Baghdad. A delegation from the Babil Cultural Center visited the sanctuary Dec. 22, after the tradition was included on the UNESCO list.

Basil resident Riyadh al-Gharib, a member of the Union of Iraqi Writers who is familiar with Iraqi cultural heritage, applauded the plan to establish a national day for the feast, which he said will boost Iraqis’ "sense of patriotism and shared identity."

Mazen Razouki, a member of the Baghdad Council's Antiquities and Tourism Committee, told Al-Monitor, “The shrine … is more than a cultural and religious monument, as it stresses the shared national identity among Iraqis of different beliefs and denominations, where Kurds, Arabs, Muslims and Christians visit the sanctuary and perform the same rituals.”