Iran is dragging its feet on resolving questions about possible military nuclear research, but the head of the IAEA suggests cooperation will accelerate if and when there is a long-term nuclear agreement. 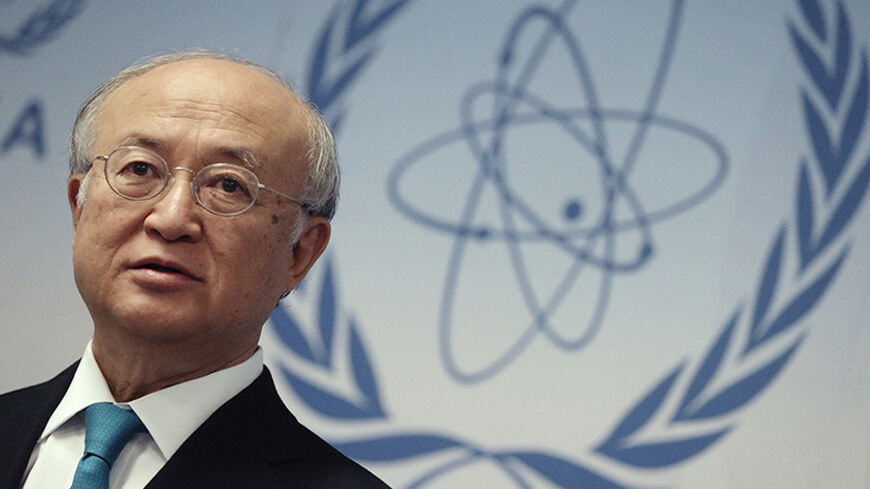 “It should not be an impediment,” Amano said after the conclusion of remarks at the Brookings Institution in Washington.

Iran, which signed a new framework for resolving so-called PMD, or "possible military dimensions," issues with the IAEA a year ago, has so far provided information about only one of a dozen key questions, Amano said, involving so-called exploding bridge wires. He said he was not surprised that cooperation had slowed as negotiators from the five permanent members of the UN Security Council plus Germany (P5+1) enter the endgame in talks that currently have a Nov. 24 deadline.

“Now is not the best time to make progress,” Amano acknowledged in response to another question from Al-Monitor. “I continue to hope this issue of possible military dimensions will be clarified as soon as possible. It is the intention of Iran and it is the intention of the IAEA.”

Many experts doubt that a deal can be concluded next month but suggest that the major elements of an agreement could be reached.

“I see no possibility of achieving a comprehensive deal by Nov. 24,” Robert Einhorn, a former senior nuclear expert with both the Obama and Clinton administrations who hosted the event with Amano, told Al-Monitor. “The best that can be achieved is to reach agreement on the key parameters of a deal and to take several more months to flesh out the parameters.”

Critics of a possible nuclear deal with Iran have insisted that the Tehran government must fully explain any possible military-related work before the international community can have confidence that it will abide by any new agreement. According to the CIA, Iran had a structured weapons program in the late 1990s at least until 2003, when it stopped the work in the aftermath of the US invasion of Iraq and disclosure of Iranian enrichment facilities.

Experts such as David Albright of the Institute for Science and International Security have said that it is critical to know the full scope of Iran’s past activities to verify the completeness of any Iranian declaration of what it possesses now.

Other experts such as Edward Levine, a former staffer on the Senate Foreign Relations Committee, say it is more important to put in place an intrusive verification system that impedes Iran from developing nuclear weapons in the future and that such an agreement should not be hostage to what Iran may or may not have done a decade ago. Iran has agreed to ratify the so-called additional protocol of the Treaty on the Non-Proliferation of Nuclear Weapons and provide even more intrusive monitoring if a deal is reached.

Amano seemed to have come down on the latter side of the argument.

He said that Iranian President Hassan Rouhani had repeatedly stated that he is willing to “accelerate clarification” of allegations of past research connected to developing the most common form of nuclear weapon. But Amano suggested that further progress would have to wait for conclusion of a comprehensive deal. He added that “this is not an endless process,” and that he expected that the outstanding issues about possible military work could be resolved “within a reasonable time frame” that he defined as less than a decade and more than one month.

Iran has charged that the allegations are the result of forgeries by Israeli and other foreign intelligence services. The IAEA has said that the material — much of which was smuggled out of Iran on a so-called laptop of death in 2005 — is credible and consistent in showing activities relevant to trying to build a nuclear explosive device.

Amano did not answer questions about the authenticity of the material and sidestepped a question about whether the IAEA would share the original documents with Iran as Iranian officials have repeatedly requested.

“We are prepared to share the documents when we consider it appropriate and necessary,” he said.

Amano also declined to answer a question about whether it was more important to have access to personnel who may have been involved in weapons research or to sites where such research might have taken place. Iran has refused to let the IAEA return to a military base called Parchin, which arms inspectors visited twice in the previous decade. “Access to scientists is very sensitive because of their experience in recent years,” Amano added, referring obliquely to the assassination of five Iranian scientists working on nuclear-related matters in recent years.

Overall, the impression the former Japanese diplomat conveyed was that the process, while slow-moving, shows promise. At some point, Amano said, he will bring his findings to the board of governors of the IAEA, which will make a decision about whether to close the file.

Ultimately, “the reality is that everything we deal with is very political,” Amano said.