IAEA report on past Iranian nuke research may hamstring deal

The issue of past military dimensions of Iran’s nuclear program continues to hover over negotiations, but there could be a way for Iran to finesse those concerns. 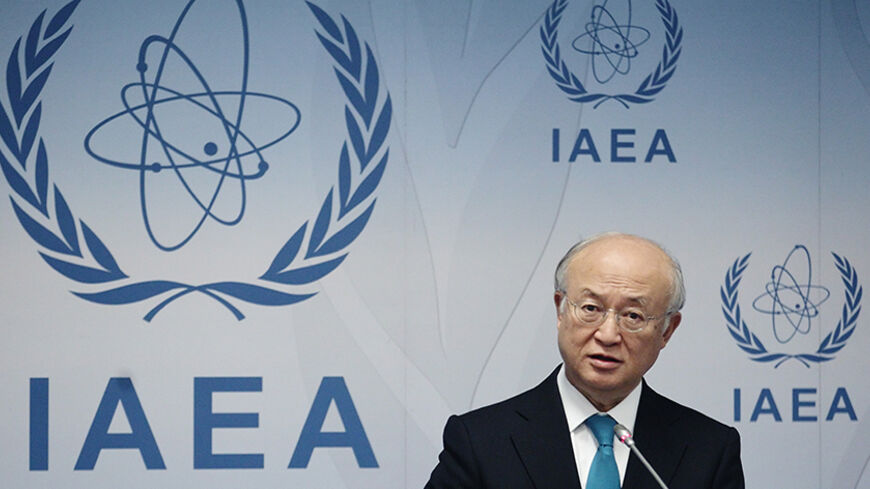 International Atomic Energy Agency Director-General Yukiya Amano addresses a news conference after a board of governors meeting at the IAEA headquarters in Vienna, June 2, 2014.

As nuclear negotiations enter a decisive phase, Iran is making halting progress addressing what is likely to be a key element of a long-term agreement: resolving international concerns about past research that would be necessary to develop the most common form of nuclear weapon.

According to the latest report by the International Atomic Energy Agency (IAEA), Iran has offered a possible if unlikely explanation for one of its past activities and continues to stonewall on two others.

The three areas are all pertinent to the development of an implosion-type nuclear bomb, which is what US intelligence and the IAEA believe Iran was at least researching before 2003. According to the IAEA report, Iran has provided additional clarification about its work on so-called exploding bridge wire detonators. Iran insists its work in this area is tied to the oil industry, not nuclear weapons, an explanation that is possible but not consistent with what the IAEA believes, according to Jon Wolfsthal, deputy director of the James Martin Center for Nonproliferation Studies at the Monterey Institute of International Studies.

The other two areas involve initiation of high explosives and calculations related to neutron transport and their application to compressed materials — all elements required to produce a warhead small enough to fit on top of a missile.

A former Obama administration official, who spoke to Al-Monitor on condition of anonymity, said that while Iran may be “slow-rolling the IAEA” until it has a better idea of whether it will achieve a long-term nuclear agreement, it is also possible that “the Iranian military and the IRGC [Islamic Revolutionary Guard Corps] don’t want to give the IAEA access to these areas,” including a military site called Parchin where Iran has destroyed buildings that may have been used for nuclear-related tests. Without a “come to Jesus moment on these initial topics … it will be difficult to reach an agreement,” the official said.

To admit such work took place would cast doubt on repeated statements by Supreme Leader Ayatollah Ali Khamenei and other senior Iranian officials that developing nuclear weapons would be contrary to Islamic law. However, there may be a way to finesse US and IAEA concerns.

Gary Samore, a former senior administration official who is now at the Belfer Center for Science and International Affairs at Harvard University, told Al-Monitor that Iran could admit researching nuclear arms — to understand the technology — but still insist that it never intended to actually build bombs.

“The IAEA would be able to say they are fully satisfied that we understand the program and have the mechanisms to monitor it in the future, but as for the intent of the program ‘we don’t have a judgment,’” Samore said. “There’s a way to fudge this so it’s politically acceptable to Iran, the US and the IAEA.”

Another possibility is to time resolution of the so-called possible military dimensions (PMD) of the Iranian program with repealing, as opposed to simply suspending, economic sanctions.

“My assumption is that a comprehensive deal leads to staggered, triggered sanctions relief,” Wolfsthal told Al-Monitor. “PMD is one of those that could be tied to further sanctions relief.”

According to the IAEA report, Iran is continuing to scrupulously observe the interim nuclear agreement it reached last year with the five permanent members of the UN Security Council plus Germany (P5+1). The interim agreement was extended in July to Nov. 24.

Since the agreement took effect, the IAEA said, Iran has capped its enrichment of uranium to 5% of the isotope U-235, down-blended or otherwise converted its entire stockpile of 20% uranium and reduced its stockpile of 5% uranium to 7,765 kilograms (17,119 pounds). Iran has not installed any major components at a heavy water reactor at Arak that could yield plutonium, another potential bomb fuel, and continues to allow the IAEA to inspect enrichment sites at Fordow and Natanz on a daily basis and to visit “centrifuge assembly workshops, centrifuge rotor production workshops and storage facilities.”

The report was published as the United States and Iran held a second day of bilateral talks in Geneva in preparation for full P5+1 meetings to reconvene in New York on Sept. 18 on the sidelines of the UN General Assembly.

Some close observers of the negotiations have become more pessimistic about the prospects for a long-term agreement by Nov. 24, arguing that the gaps over the size of Iran’s enrichment program and the duration of a deal are too wide to reconcile.

Khamenei has argued that Iran needs an industrial scale program of nearly 200,000 centrifuges — or a smaller number of more advanced machines — to produce fuel for Iran’s civilian nuclear power reactors at Bushehr. At present, Russia provides that fuel under an agreement that is due to run out in 2021 but that could be extended.

The Obama administration's official position is that Iran not only should not expand its program but must reduce its operating centrifuges from about 10,000 now to 1,500, Samore said. He added that 3,000 centrifuges with a minimal stockpile of low-enriched uranium would be sufficient to prevent Iran from enriching enough uranium for a nuclear weapon without detection for a year — a so-called breakout period that Samore said would be acceptable for the United States, including the US Congress.

An Iran source who spoke to Al-Monitor on condition of anonymity said that Iran might be willing to scale down from 10,000 centrifuges to 7,000, which would entail a breakout period of about six months.

Much will depend on the duration of a deal and how long any restrictions on the Iranian program would remain in place.

Samore said he did not think a long-term agreement would be reached by Nov. 24 but that another extension was possible. He added that he thought Israel — which has harshly criticized Obama administration negotiating strategy in the past — would accept an extension and was “coming around to the view that the status quo is acceptable” compared to a return to unfettered Iranian enrichment to 20%.

Given all the turmoil in the region and increasing tacit cooperation between the United States and Iran to blunt the Islamic State’s advances in Iraq, a long-term nuclear deal with Iran is perhaps not as urgent now as it has seemed.

“I think it’s still a possibility, but things look a little tougher than a month ago,” Wolfsthal said.