In a crucial new report by the IAEA, Iran and the UN nuclear watchdog agreed to disagree about key aspects of Iran’s nuclear program. 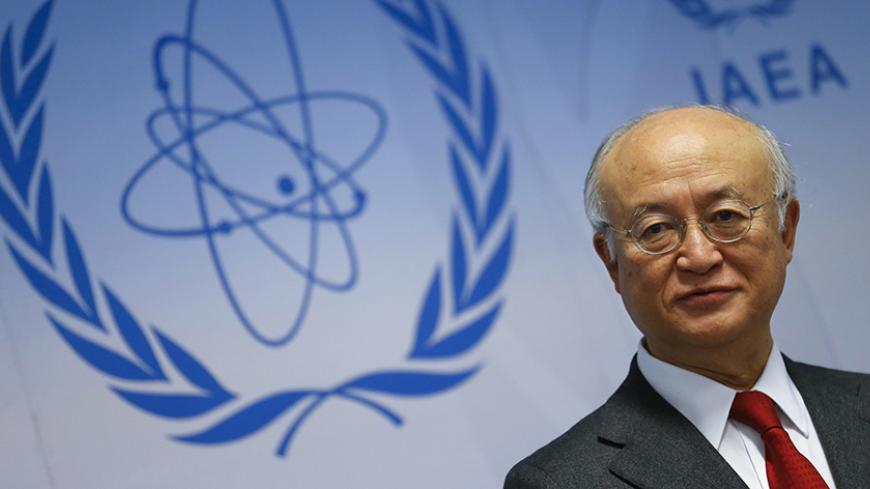 Far from being the whitewash some had predicted, a new report by the International Atomic Energy Agency (IAEA) states clearly that Iran had a nuclear weapons program until 2003 and continued some research for six more years.

The highly anticipated document on the possible military dimensions (PMD) of the Iranian nuclear program, however, broke little new ground in terms of what the international intelligence community already knew. Experts said the findings are unlikely to impede implementation of the Joint Comprehensive Plan of Action (JCPOA) curbing Iran's nuclear program for at least a decade in return for relief of economic sanctions.

Gary Samore, a nuclear expert at Harvard University's Belfer Center for Science and International Affairs, told Al-Monitor in an email that the IAEA report "is a very solid technical judgment by the IAEA, not intimidated by Iran's threats."

"The real question," Samore continued, is how the IAEA Board of Governors reacts to the report, especially whether the Board decides that the PMD investigation is essentially completed."

Under an agreement between Iran and the IAEA, the agency’s 35-member board is to reach a decision by Dec. 15. A positive vote will clear the way for full implementation of the nuclear accord early next year.

A State Department spokesman, Mark Toner, told reporters that the IAEA report “is consistent” with past US intelligence assessments and that the five permanent members of the UN Security Council plus Germany, which negotiated the JCPOA with Iran, would be submitting a resolution “with a view toward closing the PMD issue. And then, after that, we can focus on implementing the JCPOA.”

Kelsey Davenport, director for nonproliferation policy at the Arms Control Association, told Al-Monitor that the most significant conclusions were that the IAEA found no evidence that Iran had diverted nuclear material from its civilian program to weapons and that Iran had abandoned military nuclear research after 2009. She added that the findings, “while providing significant detail, don’t mean that Iran is off the hook. The agency will continue to follow up on allegations of illicit activities as it works toward formulating a broader conclusion” about the Iranian program.

Iran has always denied having a nuclear weapons program, but former Iranian President Ali Akbar Hashemi Rafsanjani stated in a recent interview that Iran considered acquiring a nuclear deterrent during the 1980-1988 Iran-Iraq War, when Iraq was attacking Iran with chemical weapons and Iranian authorities feared Saddam Hussein was close to developing nuclear bombs. According to Rafsanjani, “We were at war and we sought to have that possibility for the day the enemy might use a nuclear weapon. That was the thinking. But it never became real.”

According to an internal IAEA document obtained by nuclear expert David Albright, then-Supreme Leader Ayatollah Ruhollah Khomeini in 1984 authorized then-Iranian President [now Supreme Leader Ayatollah] Ali Khamenei to resume nuclear work that began under the shah’s regime but was suspended by Khomeini after the 1979 Islamic Revolution.

Iran procured materials and technical information from pre-revolutionary suppliers including members of a nuclear black market assembled by Pakistani scientist A.Q. Khan. In 1987, according to Albright, Khan provided Iran with a “starter kit” including drawings of rudimentary centrifuges used to enrich uranium for nuclear fuel. Iran later received help from China and Russia in further developing its uranium program, which was discovered in 2002. That led to a series of IAEA probes and eventually UN Security Council resolutions against Iran.

The IAEA report tracks closely with the conclusions of a 2007 National Intelligence Estimate by the US government that until 2003 “Iranian military entities were working under government direction to develop nuclear weapons.”

According to the IAEA, Iran confirmed “a significant proportion of the information available to the Agency on the existence of organizational structures” prior to 2003. “The Agency assesses that, before the end of 2003, an organizational structure was in place in Iran suitable for the coordination of a range of activities relevant to the development of a nuclear explosive device,” the IAEA said. “Although some activities took place after 2003, they were not part of a coordinated effort.”

The report also said it found no evidence that Iran tried to procure materials illegally for nuclear weapons after 2007.

Under an agreement with the IAEA put in place by the government of President Hassan Rouhani, Iran stepped up its cooperation with the UN nuclear watchdog on PMD issues in 2013 after years of stonewalling, but provided answers that the IAEA did not always regard as convincing. In a number of areas, the two sides basically agreed to disagree.

For example, the agency did not accept Iran’s contention that work on so-called exploding bridge wire (EBW) detonators was for non-nuclear purposes. “The Agency assesses that EBW detonators developed by Iran have characteristics relevant to a nuclear explosive device. The Agency acknowledges that there is a growing use of EBW detonators for civilian and conventional military purposes,” the report said.

The IAEA also assessed that on explosives technology known as multipoint initiation, Iran’s work had “characteristics relevant to a nuclear explosive device, as well as to a small number of alternative applications.”

Considerable attention has been devoted over the years to Iran’s activities at a military site near Tehran called Parchin, where Iran is alleged to have installed an explosives firing chamber in 2000. The report says that Iran’s explanations about activities there are inconsistent with IAEA samplings and other evidence, and that extensive work to reconfigure the site since 2012 “seriously undermined the Agency’s ability to conduct effective verification.”

On the positive side, however, the IAEA found “no indications of Iran having conducted activities which can be directly traced” to a document about uranium metal for bombs said to be in Iran’s possession “or to design information for a nuclear explosive device from the clandestine nuclear supply network.”

Critics of the nuclear deal with Iran were quick to pounce on the findings as evidence that Iran lied about its program and thus is not to be trusted going forward.

Supporters, however, said that Iran was never expected fully to come clean about its past nuclear work, especially in light of Khamenei’s religious ruling that nuclear weapons violate the tenets of Islam.

As former nuclear negotiator Robert Einhorn wrote recently, “While a truthful confession would be valuable, it is not necessary for a sound agreement. More important than hearing Iran's version of the past is having confidence that nuclear weapons will not be pursued in the future.”

Davenport added that the multilayered approach to verification in the JCPOA “provides the strongest guarantee that any violations will be quickly detected and … that Iran’s program remains peaceful.”