Al-Monitor's Barbara Slavin reports that the director-general of the International Atomic Energy Agency, Yukiya Amano, says his organization will share sensitive data with Iran “when appropriate," in a possible new bid to gain Iranian cooperation on allegations that it had a nuclear-weapons program. 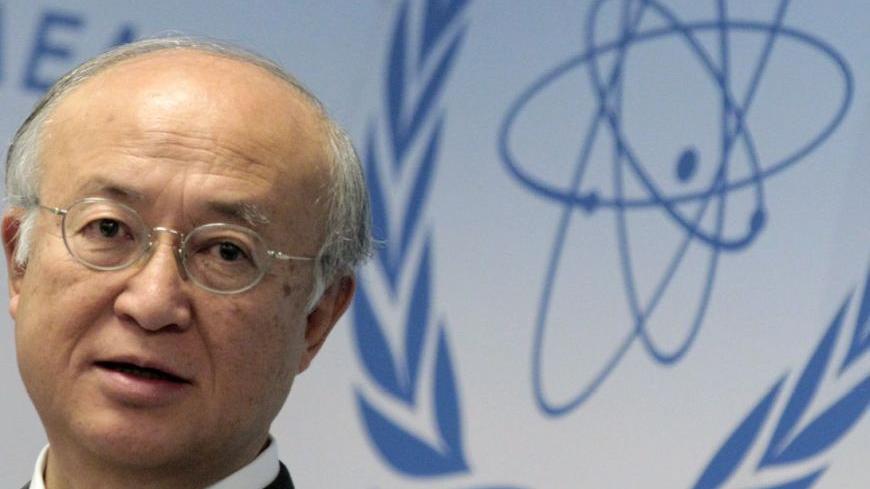 In a possible new bid to gain Iranian cooperation on allegations that it had a nuclear weapons program, the director-general of the International Atomic Energy Agency (IAEA), Yukiya Amano, says his organization will share sensitive data with Iran “when appropriate.”

Iran for years has complained that it has not seen the documents and other materials to back up IAEA and Western intelligence claims that it carried out a series of nuclear weapons-related studies in the late 1990s. According to a 2007 US National Intelligence Estimate, Iran halted a structured weapons program in 2003 but elements of the work may have continued.

Amano, speaking at the Council on Foreign Relations, appeared to be making a new pitch for Iranian cooperation in advance of a scheduled visit by an IAEA delegation to Iran next week, on Dec. 13. To provide “credible” assurances about its nuclear past, he said, it was not necessary for Iran to resolve “100%” of international concerns but to agree on a process and start down that path.

“Believe me, we are reasonable people,” he told a group of journalists after the event. “Credible doesn’t mean zero or 100% […] Bypassing these issues with a military dimension or refusing to respond to questions is not the solution.”

Asked during the Council session whether the IAEA would satisfy Iranian demands to see documents and videos that provide basis for the charges, Amano said, “in general, we can provide information to Iran when appropriate. We are now negotiating an approach as a whole [to resolving questions about alleged weapons work] and sharing of information is part of it.”

International tensions over Iran’s nuclear program have mounted since 2010 as Iran has amassed larger quantities of uranium enriched to 20% U-235 — a major step on the road to weapons grade uranium.

Iran, which denies that it is seeking to build nuclear weapons, has complained that Amano, a former Japanese diplomat and nonproliferation expert, has shown bias against Iran in comparison to former director general Mohamed ElBaradei, an Egyptian citizen, who was seen as more sympathetic to Tehran’s views.

Amano stressed that the IAEA’s role was to receive and check information from member states — not to decide what action those states should take.

While the IAEA wants its proliferation concerns addressed, Amano conceded that “it is not easy” to separate his organization’s work from the larger issue of reaching a wider deal with Iran about its nuclear program.

The five permanent members of the UN Security Council plus Germany have been consulting for the past few weeks on a new offer to Iran but a meeting looks increasingly unlikely before early next year. One of the key issues is whether to offer sanctions relief to Iran in return for capping uranium enrichment at 5% of U-235.

Among the IAEA’s major demands is that Iran — which allows routine inspection of its declared nuclear facilities — let inspectors visit a military base called Parchin near Tehran. While the IAEA has been to the base in the past, inspectors didn’t know where to look.

“At that time, we didn’t have enough information,” Amano said in response to a question from Al-Monitor. After the IAEA narrowed its demands to a specific site, however, Iran began to cleanse the area, where buildings were allegedly used before 2003 to conduct high explosives tests that could have nuclear weapons applications.

Amano said satellite imagery shows that Iran has demolished the buildings at the site, hosed the area down with water and removed soil but that the IAEA would still find some value in visiting.

“We cannot say we are sure to find something. But it is useful to have access to the site,” he said. “We are requesting access to information, people and the site.”

Amano, who rarely speaks publicly in Washington, also cleared up concerns about the recent removal of fuel from Iran’s sole functioning nuclear power reactor at Bushehr.

Responding to a second question from Al-Monitor, he confirmed Iranian reports that Iran was not trying to divert the fuel for possible future use in a nuclear weapon but removed it because of safety concerns.

“Some fuel has been removed from the core but this does not pose safeguard problems,” Amano said. “They are taking necessary measures.”

Iran has reported that debris was left in the fuel assemblies during construction.

Initially begun by the German company Siemens in the 1970s, the Bushehr reactor causes anxiety for many nuclear experts, ordinary Iranians and Iran’s Arab neighbors. The Germans stopped work on the site after the 1979 Islamic Revolution and the half-built reactor complex was then bombed by Iraq during the 1980-88 Iran-Iraq war.

In the 1990s, Iran signed a contract with Russia to complete the plant, which is now a hodge-podge of technologies — among them, the same sort of reactor that experienced a catastrophic meltdown at Chernobyl in 1986.

Iran has claimed for years that the plant was close to full operation but there have repeated delays. The 1,000-megawatt reactor was said to have finally come on line in September but then operations were halted in October to remove more than 160 fuel rods.

Russia, which provided the fuel for the reactor as well as construction and technical advice, is due to hand over management of Bushehr next March.

David Albright, president of the Institute for Science and International Security, told Al-Monitor that there is “no confidence when the Russians leave that the Iranians can manage it. They are using really old German equipment and assuming it will still work when it’s been in storage for 20 years.”

Iran has not signed an international Convention on Nuclear Safety drafted in the wake of Chernobyl or conventions on the safe management of spent fuel and radioactive waste. Bushehr’s location on the Persian Gulf raises worries among Arabs living across the Persian Gulf.

Amano said that the IAEA was aware of the concerns and had given Iran “several recommendations” to improve safety at Bushehr but did not specify them.