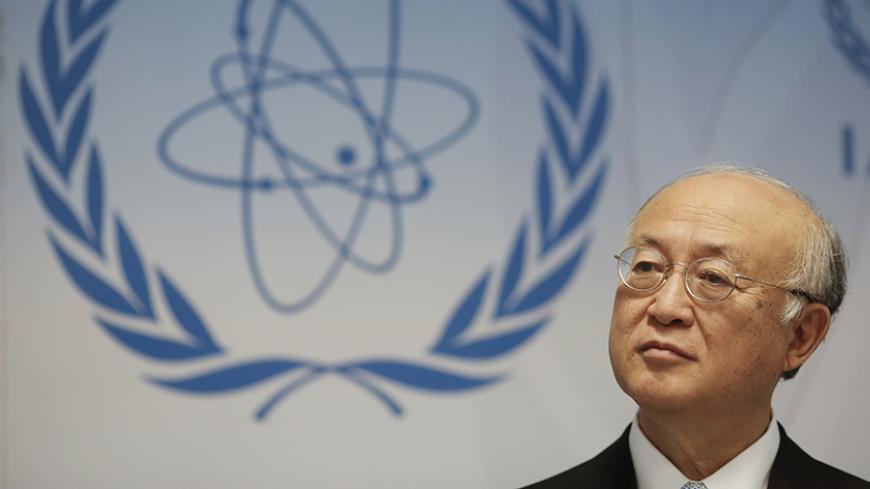 International Atomic Energy Agency head Yukiya Amano addresses a news conference after a board of governors meeting at the IAEA headquarters in Vienna, June 8, 2015. - REUTERS/Leonhard Foeger

International Atomic Energy Agency (IAEA) head Yukiya Amano's arrival in Iran on the second day into the weeklong extension of the nuclear talks between Iran and the world's six major powers is being hailed as an important development in resolving some of the more complex points in the dispute over Iran’s nuclear program.

While this is not Amano’s first trip to Tehran, given his recent statements about the inspection of military sites, Iranian conservatives fear his trip signals that lines will be crossed in a comprehensive deal.

“In many other countries from time to time we request access to military sites when we have the reason to, so why not Iran?" he said in May. "If we have a reason to request access, we will do so, and in principle Iran has to accept it.”

After Amano’s comments, Iran's supreme leader, Ayatollah Ali Khamenei, who has final say on the nuclear deal, warned about the inspection of military sites and allowing Iran’s nuclear scientists to be interviewed by the IAEA.

It is no surprise then that conservatives view Amano’s trip with suspicion.

Foad Izadi, a conservative analyst who specializes in American issues, said to Fars News on July 2, “Amano came to Tehran to convince Iranian officials to cross the red lines and to accept commitments beyond the Additional Protocols. … Amano, in the Tehran trip, representing America, will try to convince Islamic Republic officials to allow interviews or interrogations of nuclear scientists and on the issue of possible military dimensions [PMD] to accept the views of the IAEA.”

When the IAEA requests to inspect a site, the country under question has a right to ask why and accept or turn down the request. If the country turns down the request, the IAEA can issue a negative report about the country. But, according to Izadi, since the United States believes that a negative report from the IAEA will not automatically result in more sanctions or pressure, the United States is seeking a nuclear deal that would make inspections mandatory. This is where Amano’s role comes to play a large part, Izadi said.

Nuclear Iran, a website with close views to former nuclear negotiator Saeed Jalili, also wrote about the reason for the Amano visit, with Ali Shahedian saying that Amano’s trip was directly related to the last-minute negotiations taking place in Vienna. “It is assumed that this trip has one main agenda[,] and it is that Amano wants to present a new formula to Iran for resolving the PMD issue,” he wrote, describing the PMD issue as a “claim” by the IAEA and “completely fabricated.”

Shahedian wrote that resolving the PMD issue is a precondition of the P5+1 for lifting sanctions against Iran and this requires access to individuals and military sites. He added that a new formula will either change the manner in which individuals are interviewed or how military sites are inspected or may even postpone the issue.

In Tehran, Amano has already met with the secretary of Iran’s Supreme National Security Council Ali Shamkhani and President Hassan Rouhani. Interestingly, on June 1, Shamkhani claimed that his name was at the top of the list of individuals that the P5+1 wanted to interview. According to Shahedian, the manner in which Amano leaves Tehran will determine whether or not progress was made.