John Kerry: Iran deal not 'out of reach'

Speaking ahead of a trilateral meeting in Vienna, US Secretary of State John Kerry expressed hope for the nuclear deal. 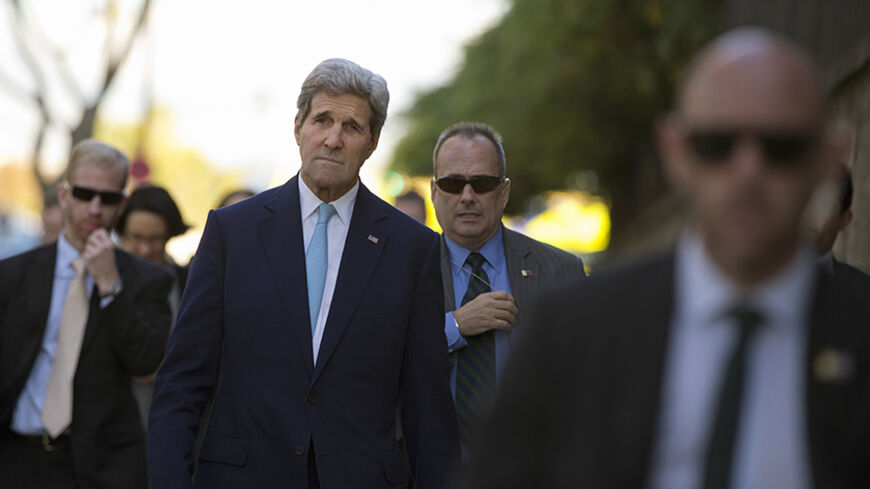 Paris — US Secretary of State John Kerry said Oct. 14 that it would be premature to speculate on whether another extension will be needed to reach an Iran nuclear deal.

“I am glad that all of the pundits and speculators are doubting whether [agreement] can be reached,” by the Nov. 24 deadline, Kerry told journalists at a press conference, following a three-hour meeting with Russia’s Foreign Minister Sergey Lavrov. “They know more than I do.”

“I don’t believe it’s out of reach,” Kerry said. “But we have some tough issues to resolve. I am not going to prognosticate. We need to continue to have some serious discussions and see where we are.”

Zarif and Ashton were due to meet Tuesday night.

The political directors from the six world powers that comprise the P5+1 — the five permanent UN Security Council members plus Germany — will also meet with Ashton and Zarif in Vienna on Oct. 16, the EU announced Tuesday.

Zarif, speaking to reporters after his arrival in Vienna Oct. 14, said he hoped for progress, if no breakthrough, at the meetings this week.

“Reaching an agreement in this round is very unlikely because there are issues that still remain that need to be resolved,” Zarif told reporters Oct. 14.

"On the agenda is the volume of uranium enrichment and the timetable for lifting the sanctions,” Zarif said.

Zarif said that general understandings had been reached at recent rounds of talks, but key details remain to be resolved, including Iran’s enrichment capacity in a final accord, the time line for lifting sanctions and the duration of the comprehensive accord.

Reza Marashi, Iran analyst with the National Iranian American Council, said progress was needed whether an agreement is to be finalized in November or an extension would need to be negotiated.

Negotiators from both the United States and Iran are “looking for new, creative proposals to be brought to break the impasse and move things along,” Marashi told Al-Monitor by phone from Vienna Oct. 14. “If they seal the deal by Nov. 24 or need an extension, either way, they have to make tangible progress this round.”