As trilateral talks conclude in Vienna, the United States claims progress toward a nuclear deal with Iran but problems remain. 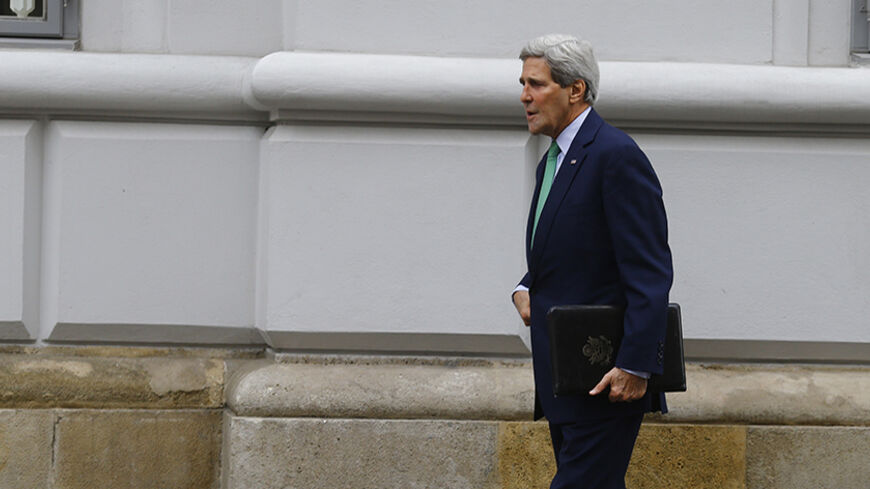 US Secretary of State John Kerry arrives prior to a meeting with EU foreign policy chief Catherine Ashton and Iranian Foreign Minister Mohammad Javad Zarif, at a hotel in Vienna, Oct. 15, 2014. - REUTERS/Leonhard Foeger

VIENNA — US officials said on Oct. 15 that progress has been made but much work remains to be done to reach a final Iran nuclear accord next month.

“We have and continue to make progress, but there is still a substantial amount of work to be done,” a senior US official, speaking not for attribution, told journalists here Oct. 15 after some six hours of meetings between US Secretary of State John Kerry, Iranian Foreign Minister Mohammad Javad Zarif and European Union High Representative Catherine Ashton.

“Many people, including President Obama have said what an historic opportunity this is,” the senior US official said.

“We can see a way forward to a verifiable agreement that resolves concerns” about Iran’s nuclear program and “provides the Iranian people with more economic opportunities,” the senior US official said. “But the question remains whether Iran’s leaders can and will seize this opportunity.”

The three-way US-Iran-EU meeting, the third at the foreign minister level since July, will be followed up by a one day political directors meeting here Oct. 16 during which Ashton and Zarif can debrief political directors from the P5+1 (the five permanent members of the UN Security Council plus Germany) about the latest discussions. Then the group will meet about how to proceed on next steps to try to advance the final accord by Nov. 24.

US officials said the focus remains on trying to reach a final agreement by Nov. 24, and said there has been no talk yet of an extension. The deadline helps keep the pressure on to make tough political decisions needed to reach a deal, the US official said.

“We are still focused on Nov. 24 and getting an agreement by Nov. 24,” the US official said. “If we take the pressure off [by extending the deadline now], then [we] will never make hard decisions … and there are hard decisions to be made here.”

But overall, US officials spoke less this round about significant gaps on core issues than they had at earlier rounds, and talked more about creative ideas and possible technical solutions to reach an agreement that closes off all pathways for reaching a nuclear weapon. Those include making sure Iran’s uncompleted Arak reactor not produce weapons grade plutonium, that Iran’s uranium enrichment facilities at Natanz and Fordo not be used to produce weapons grade uranium, and to close off any possible covert path to produce weapons grade fissile material, largely through concrete monitoring and verification mechanisms, the US official said.

“We’ve been … very creative in terms of what we’ve put on the table, the technical ideas,” a second senior US official said Oct. 15. “Now, ‘creative’ does not equal concessions.”

“We’re trying to shut down the four pathways to get enough nuclear material for a nuclear weapon,” the US official said. “There are a lot of ways you can do that. There’s no one right answer. So if we can get in those four pathways to the right answer by being very technically creative, why would we not do so?”

The second US official downplayed speculation on the need for a big breakthrough at the talks, saying it was more of a tough, technical slog. “When we see progress made … particularly on the technical side, it’s just the sort of long, hard work of chipping away at the difficulties here and the disagreements and finding out a way forward,” the second US official said. “It doesn’t mean it’s easy … but I think the lack of sort of the ‘aha’ moment does not indicate anything about what’s happening in negotiations.”

“We know where we are headed,” the first US official said. “We know what we each want the objective to be. We are trying to narrow those gaps. But we have to do so [in a way that ensures] all of the pathways to fissile material for a nuclear weapon are shut down.”

“Everyone is working incredibly hard,” the US official said. “These are incredibly complex negotiations. The detail is extraordinary. Every line of any political agreement has pages of annexes attached to it. The detail is critical to all of this.”