US officials claim progress has been made as movement is reported on key issues. 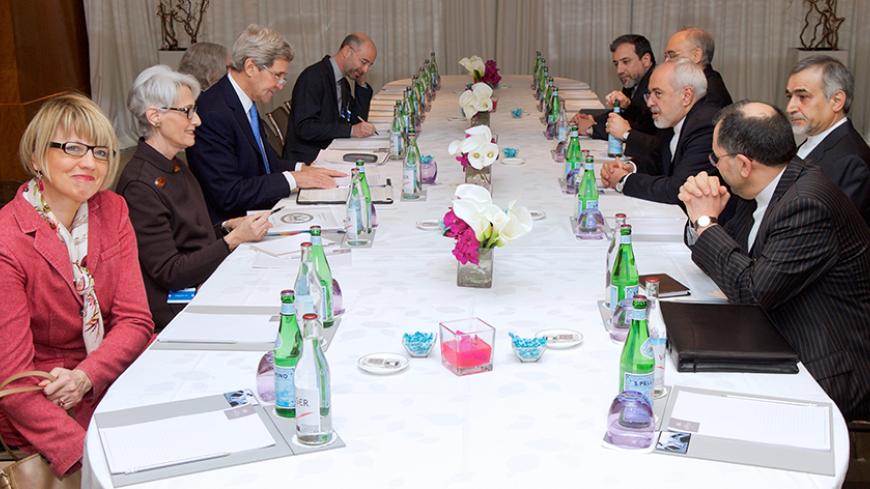 US Secretary of State John Kerry and Iranian Foreign Minister Mohammad Javad Zarif, flanked by Ali Akbar Salehi, president of the Atomic Energy Organization of Iran, US Energy Secretary Ernest Moniz, and a team of advisers from each country, as well as the European Union, sit down in Geneva, Switzerland, Feb. 23, 2015. - State Department

GENEVA — US and Iranian nuclear negotiators cited progress made but more work to be done at the conclusion of some of the highest level talks held between the two nations, involving four Cabinet secretaries and Iranian President Hassan Rouhani’s brother.

But in some ways, this low-key meeting at a hotel on the Geneva lakeside felt like a turning point in over a year of negotiations to reach a final nuclear accord that has already required two extensions. It was not so much in the typically cautious, much caveated language negotiators used to describe their progress, but in their body language that negotiators showed signs of growing confidence that they may be on track to reach a political agreement on major elements of a final nuclear accord in the coming weeks.

The talks here have allowed the parties “to very much sharpen up some tough issues so we can work to a resolution,” a senior US administration official, speaking not for attribution, told reporters at the conclusion of four days of talks here Feb. 23, which included not only Secretary of State John Kerry and Iran Foreign Minister Mohammad Javad Zarif, but also, for the first time, President of the Atomic Energy Organization of Iran Ali Akbar Salehi, and US Energy Secretary Ernest Moniz, as well as Rouhani’s brother, Hossein Fereydoun.

“These were very serious, useful and constructive discussions,” the US official said. “We have made some progress, but we still have a long way to go.”

"We had serious talks … especially with the Americans in the past three days,” Zarif told Iran’s Fars News Agency Feb. 23. "But still there is a long way to reach a final agreement."

There were signs that progress had occurred in recent days on one of the most vexing issues in over a year of negotiations: the size of Iran’s enrichment capacity in a final deal. The United States has said that it requires limits to Iran’s enrichment capacity in a final deal that would ensure a minimum one-year “breakout” time — the amount of time it would theoretically take Iran to produce enough fissile material for a nuclear weapon.

Asked about his comment, and its seeming indication that some sort of decision point had been anticipated, the US official told Al-Monitor, “All I can say is that we have made some progress.”

US negotiators and technical experts have discussed with Iran counterparts various formulas involving centrifuge numbers, stockpile size and other factors that would achieve that one-year breakout, for a decade or longer. Without Iran agreeing to work with one of the formulas, Washington would not be able to agree to a final deal, US officials have indicated.

The US administration’s assessment of the prospects of reaching an Iran nuclear deal rose following meetings between US and Iranian negotiators in Munich earlier this month (Feb. 6-8), Al-Monitor previously reported, suggesting that the Iranians may have indicated they were willing to work with one of the formulas the United States had put forward.

Iran has indicated willingness to consider shipping out a large portion of its stockpile of 3.5% low enriched uranium, likely to Russia, which would allow it to have more centrifuges while still maintaining a one-year breakout, diplomatic sources have said.

Negotiators are working to try to reach a political agreement on all major elements of a comprehensive Iran nuclear deal by the end of March, and to then fill in all the technical details by a June 30 deadline. Congress has threatened to impose new economic sanctions on Iran if a framework agreement is not reached by March 24.

“There are very tough issues and there is still a long way to go,” the senior US official said. “We put one foot in front of the other.”

“We all feel the pressure,” the US official said. “It doesn’t mean it will make us rush [to achieve an agreement] to shut down the four pathways to fissile material for a weapon, and make sure Iran does not acquire a nuclear weapon. That is the purpose.”