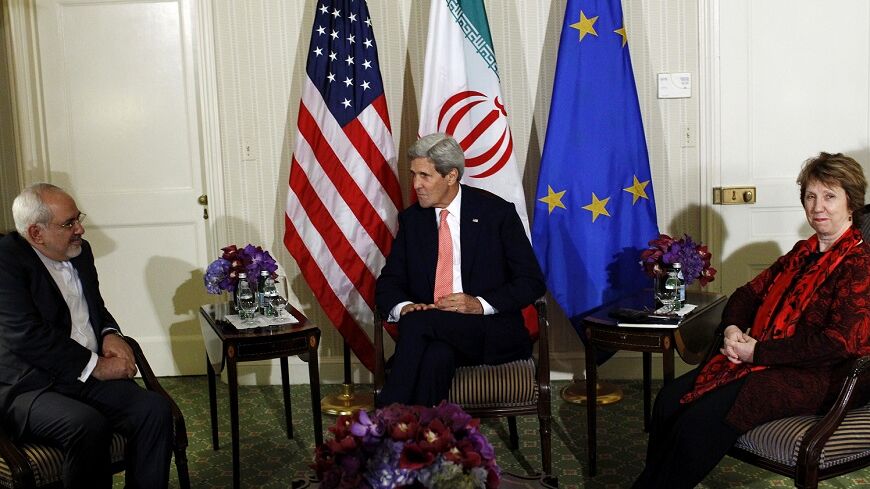 US negotiators, including Deputy Secretary of State Bill Burns, Undersecretary of State Wendy Sherman and senior adviser Jake Sullivan will meet with their Iranian counterparts in Vienna Oct. 14, a day ahead of Kerry joining the Ashton-Zarif meeting, the State Department said.

The meetings come as there is a growing sense in the Washington policy community and beyond that concluding a comprehensive accord by the Nov. 24 deadline is unlikely.

"A full-fledged agreement by Nov. 24 is no longer likely. But what is still achievable is a breakthrough that could justify a few more weeks for hammering out the remaining details," Ali Vaez, senior Iran researcher at the International Crisis Group, told Al-Monitor Oct. 8.

“My sense is that the gap [in positions] is unbreakable,” Amos Yadlin, former Israeli military intelligence chief who now heads Israel’s Institute for National Strategic Studies (INSS) think tank, told Al-Monitor in an interview Oct. 7. “Both sides want an agreement, but the parameters are very far away.”

A spokesman for Ashton said she would hold bilateral talks with Iran's Foreign Minister Mohammad Javad Zarif in Vienna Oct. 14; then she and Zarif will be joined by Kerry for a trilateral meeting Oct.15.

Next week's meetings "form part of the intensive diplomatic efforts … to reach a comprehensive solution by the Nov. 24 deadline, under which Iran would reassure the international community about the exclusively peaceful nature of its nuclear program," Ashton's spokesman Michael Mann said by email Oct. 8.

Though negotiators from the United States, EU and Iran insist they are still working toward the Nov. 24 deadline, close observers of the talks believe completing a final accord by the end of November is increasingly unlikely, as significant gaps on core issues remain.

“It only makes sense for the P5+1 to seek a more permanent extension of the interim agreement in the event a final agreement remains beyond grasp this fall,” Jofi Joseph, a former White House Iran arms control adviser, wrote in The Diplomat Oct. 7.

“Any such agreement should have a duration of at least one year, with straightforward procedures for renewal if both sides agree,” Joseph said. “The continuation of an interim agreement would provide the breathing space needed for all sides to take an extended break from negotiations over a permanent deal.”

“This may be a healthy outcome, as it would allow the negotiating partners to step back from a full year of frenetic and non-stop diplomacy, assess the state of play and the viability of their objectives, and eventually return to the negotiating table with a fresh perspective,” Joseph wrote.

"The negotiations have reached a sensitive phase and the Islamic Republic of Iran has put various proposals on the table," Zarif said Oct. 6, according to Iran's Press TV. "Now it is the other side’s turn to show its determination to reach an agreement."

The INSS' Yadlin said the Iranians have remained tough in their negotiating position because they assess the pressure on their economy has been somewhat relieved, their economy is being better managed under the Hassan Rouhani administration and they think the regional situation including US-led international intervention against the Islamic State could work in their favor, he told Al-Monitor. The Iranians also assess that the military option is off the table, he said.

“Innovative proposals have been offered to try and bridge gaps,” but Iran’s basic position on issues like enrichment capacity in a final deal have so far remained inflexible, Yadlin said. “As I see it now, the chance for a good deal is very, very low.”

The International Crisis Group's Vaez says there was still a way forward.

"As usual, it is a far safer bet to wager on breakdown than on muddling through, as the latter is vulnerable to sabotage by outside actors," Vaez said. "The only way forward is to put aside brinkmanship over technicalities and reverse engineer a deal based on the parties’ core political imperatives."