Iran nuclear negotiator says talks may be extended once more

Deputy Foreign Minister Seyed Abbas Araghchi, one of Iran's nuclear negotiators, has said that if the next round of nuclear talks do not make progress, a final deal by the Nov. 24 deadline will not be possible and another extension may be needed. 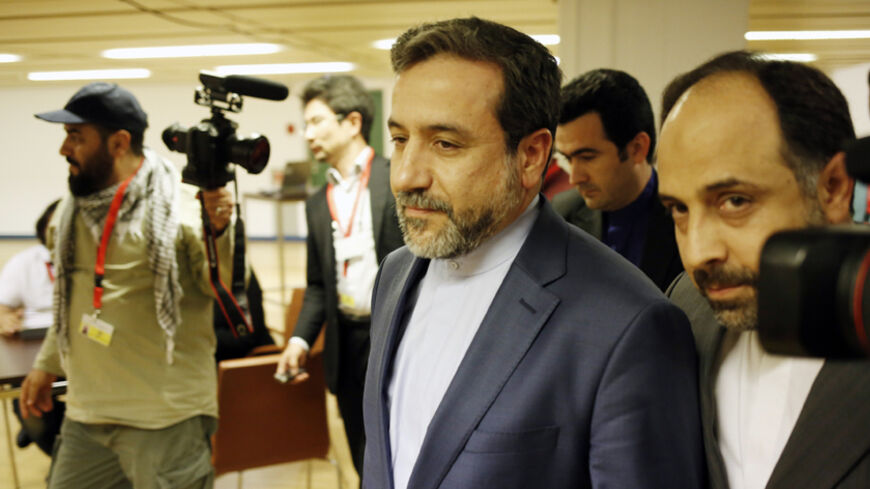 Abbas Araghchi (C), Iran's chief nuclear negotiator, arrives at the Austria Center Vienna after another round of talks between the EU and P5+1 on May 16, 2014 in Vienna. - DIETER NAGL/AFP/Getty Images
Arash Karami
@@thekarami
October 10, 2014

Iranian nuclear negotiator and Deputy Foreign Minister Seyed Abbas Araghchi said that the nuclear talks between Iran and the five permanent members of the UN Security Council plus Germany (P5+1) may be extended beyond the Nov. 24 deadline.

“Time is passing rapidly and we are still not unhopeful to reach a conclusion by Nov. 24,” Araghchi told reporters at a meeting with the judiciary officials in Mashhad.

On the upcoming talks in Vienna, Araghchi said, “If the results of this next round of talks are not good enough, we certainly will not reach a final deal by Nov. 24.”

Araghchi said that the Oct. 14 meeting will be bilateral talks with the United States and European Union Foreign Policy Chief Catherine Ashton. The Oct. 15 meeting will be trilateral talks between Ashton, Iran's lead negotiator and Foreign Minister Mohammad Javad Zarif and US Secretary of State John Kerry.

“These negotiations will be about the topics of sanctions and how to lift them and enrichment,” Araghchi said, adding that he hopes “we can open a new path.”

In a transcript provided by Fars News Agency, Araghchi said, “Everything is possible, even extending the negotiations.” He did not elaborate on what an extension might look like.

Iran and the P5+1 initially reached an interim deal in November 2013. Iran suspended some nuclear activity in exchange for the temporary lifting of some sanctions and the unblocking of some funds. In July 2014, the negotiators agreed to extend the deadline until Nov. 24.

On the last negotiations that took place on the sidelines of the 69th UN General Assembly, Araghchi said, “In New York, there were expectations that progress would take place, but that did not happen.” Western negotiators also said that “limited progress” had been made in those talks.

According to the spokesman of the parliamentary National Security and Foreign Policy Committee, Seyed Hossein Naghvi-Hosseini, Zarif’s report to the committee about the New York negotiations did not appear optimistic. According to Naghi-Hosseini, Zarif told the committee that lobbies in the United States affiliated with Israel did not want any type of deal made with Iran and for this reason, the United States was not looking to reach an agreement, and that Iran needed to prove to others that they tried to reach a deal. The comments of this committee, which has taken a hard line against the nuclear talks and previously leaked a number of details about the nuclear talks, did not receive wide media coverage inside Iran.

President Hassan Rouhani’s own adviser, Ali Younessi, contradicted Naghvi-Hosseini and said that the United States, of all the P5+1 countries, was the most inclined toward reaching a final deal with Iran, but that China and Russia did not want to see a deal happen. However, he added that he was not optimistic about reaching a final deal.