Egyptian President Abdel Fattah al-Sisi has issued a presidential decree increasing punishment for groups receiving foreign funding in the context of counterterrorism, but activists fear the new measures will target them. 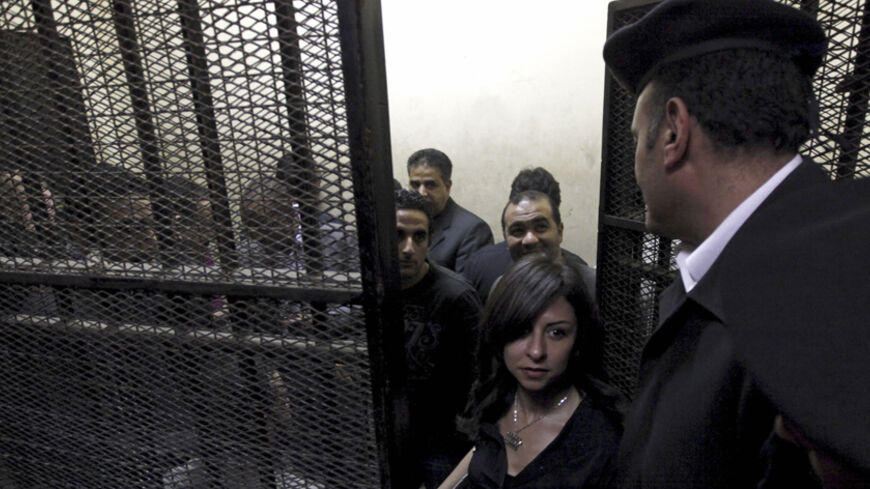 Activists, accused of working for unlicensed non-governmental organizations (NGOs) and receiving illegal foreign funds, stand in a cage during the opening of their trial in Cairo, March 8, 2012. - REUTERS/Mohamed Abd El Ghany

Once again, Egyptian authorities have raised controversy among lawyers and activists as a result of legislative decisions and amendments to laws regarding acts threatening the country’s security. On Sept. 23, Egyptian President Abdel Fattah al-Sisi issued a presidential decree to amend Article 78 of the Penal Code to include harsher punishment on those receiving foreign funding, within the context of the counterterrorism policy pursued by Egypt since the outbreak of the events of June 30, 2013.

According to the amendments, the same punishments are to be applied to anyone making offers or promises of foreign financial support including mediators. This amendment covers verbal offers, but also, "In case the request, or offer and the approval thereof was made through electronic or regular mail, the crime shall be considered committed once the letter or statement is issued.”

The previous law prohibited anyone from receiving support from "any foreign country or people working for its benefit,” but has been expanded to include legal citizens, and local and foreign organizations, whether they are affiliated with a foreign government or not.

The amendments also included nonexclusive means of funding, comprising “movable or immovable property, cash money, equipment, devices, weapons, ammunitions and the like.” This sentence previously ended with, “or any other possible device, including nonmilitary equipment or weapons.”

For accused public employees, persons assigned with a public service, persons with a parliamentary capacity or persons who committed crimes during wartime or for purposes of terrorism, the death penalty was added.

The amendments have drawn support from significant circles, with many considering them to be positive measures on the part of the state to eradicate terrorism and uncover collaborators of foreign entities that pose a threat to the country’s interests.

Nasser Amin, an attorney for the Supreme Constitutional Court and member of the National Council for Human Rights, told Al-Monitor, “Imposing harsher sanctions is necessary at this time to preserve public peace and security against the threat of terrorist organizations and individuals,” saying that the law would not affect the work of civil society organizations and that there is no need for activists to have concerns about these amendments.

Meanwhile, the opposition activists believe that these amendments are mainly aimed at cracking down on civil society organizations, which receive a great deal of foreign funding.

During an interview with Al-Monitor, Gamal Eid, the executive director of the Arabic Network for Human Rights Information said, “The formulation and amendments of the law are loose and do not clearly specify the targeted persons.”

“According to the amended text, any gift I might receive from a foreign friend could be considered a criminal act. These amendments would serve as a sword hanging over those opposing the authorities. The state could fabricate any accusations against anyone under the pretext of receiving foreign funding,” he said.

He also said that the Egyptian government is trying to silence all dissenting voices. According to Eid, the state has managed to take over all opposing media outlets by opening pro-government media channels, and was left with one obstacle: civil society groups and activists. Thus, amendments were made to further crack down on their activities.

He also alluded that in light of the recent measures, many people working in the field of human rights would resign, for fear of reprisal on the part of the state, which could accuse them of collaborating with foreign bodies.

Despite its support for the Egyptian state, the Egyptian Organization for Human Rights expressed concerns over the new amendments. In a statement issued on Oct. 2, the organization said, “The amendments were made in line with the approach of the UN Security Council to strengthen international cooperation to fight against terrorism after the escalated danger of the Islamic State [IS].” The UN Security Council issued Resolution 2170, stressing the provisions of Resolution 2161 on imposing sanctions on individuals, groups and organizations associated with IS and Jabhat al-Nusra.

In its statement, the organization demanded the Egyptian authorities safeguard human rights when arresting terrorist suspects, during their incarceration and prosecution, and not to establish special or extraordinary courts to deal with issues relating to terrorism, in such ways that are not in line with human rights standards. The organization called on the banning of torture and other inhuman and degrading means to extract information from suspected people.

Amid support and rejection of these amendments, the parties that the Egyptian government will deal with according to this law will be revealed in the near future.

by Murielle KASPRZAK and Joseph SCHMID | AFP | May 26, 2022
END_OF_DOCUMENT_TOKEN_TO_BE_REPLACED