The Egyptian parliament has approved a new law to regulate the activities of civil society organizations and monitor their sources of funding, although some view this as going against the Egyptian Constitution. 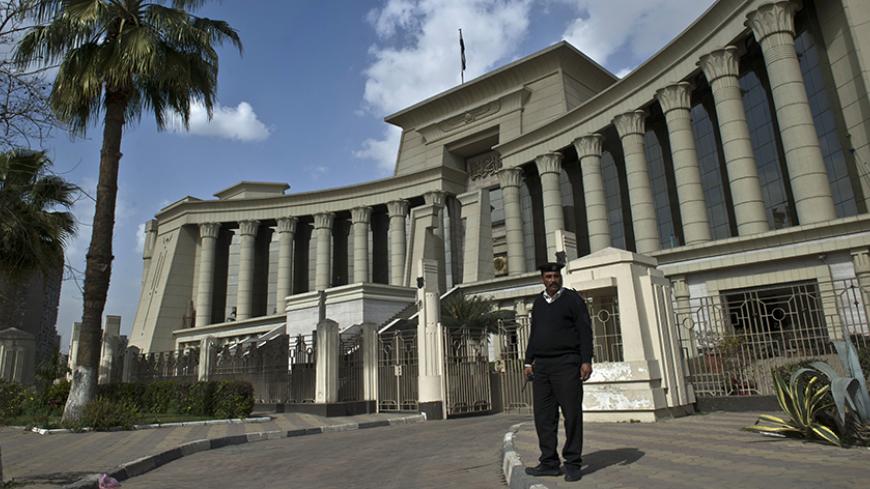 CAIRO — The Egyptian parliament announced its final approval for a draft law regulating the activities of civil organizations in Egypt, amid criticism by representatives of civil society and rights organizations. These considered the law to be a new tool in the hands of the government to impose its total control over the works of these organizations and hinder their activities. Such a measure blatantly violates the Egyptian Constitution, according to which all citizens have the right to establish their own associations and to work freely away from the intervention of administrative bodies.

In a controversial and surprising move, the Egyptian House of Representatives announced Nov. 29 that it had consented to the draft law regulating the activities of civil associations and establishments. The bill was presented by member of parliament Abdel-Hadi al-Qasabi, the chairman of the parliament’s Social Solidarity Committee and a member of the Support Egypt Coalition. Qasabi is known for his close ties to the government and for defending President Abdel Fattah al-Sisi’s policies. The bill has garnered the support of over 200 parliamentarians. For the first time since it was called into session in January, parliament is working to settle a law of this level of importance and with this degree of haste without involving either the government or representatives of civil society.

Parliament Speaker Ali Abdel Aal said Nov. 14 that the law, which had been prepared in the Social Solidarity Committee, represented a positive development for this parliament, as it targets those areas that have remained thorny for a long time. In his view, it is all the more significant since there are internal and external pressures working to prevent the law’s passage.

Members of parliament consider the law a tool to combat the chaos of civil society organizations and “suspicious” nongovernmental organizations (NGOs), which in their view have exploited the events that have rocked Egypt since the January 25 Revolution. Many believe these groups seek to profit from and incite chaos by writing erroneous reports about the situation in Egypt. Some observers view the law as a new tool to exert complete and absolute control over civilian activist organizations, and hinder their work in a manner that violates the constitution and all the international agreements that Egypt has signed in relation to civil society activism.

In this context, on Dec. 1, NGO Maat for Peace, Development and Human Rights asked all civil society organizations and citizens to sign a petition in protest to the law. The Maat campaign also called upon Sisi to use his constitutional powers to oppose the law and return it to parliament again, to open a real civil dialogue on the law before it is issued.

The text of the law consists of 89 articles and nine chapters and requires that all civil organizations fix their status in accordance with the law within one year, instead of six months under the former draft law, or else they will be dissolved.

Articles 70-72 are among the most controversial. These provide for the establishment of a national agency to regulate foreign NGOs in Egypt and monitor foreign funding of Egyptian civil society organizations. Its authorities would extend to cover everything pertaining to the establishment and operation of these organizations. That body would concern itself with agreeing to their operation; granting them licenses to operate; permitting them to send money, aid or donations with the goal of carrying out development projects; verifying that those funds were spent on their designated purposes; and taking any necessary actions in the event that those funds or foreign financing are spent for purposes other than that for which they were allocated. This agency will be composed of representatives from 10 other bodies, namely the Interior Ministry, Foreign Ministry, Defense Ministry, Justice Ministry, International Assistance Ministry, General Intelligence, Administrative Oversight, Central Bank, Money-Laundering Unit, in addition to the Ministry of Social Solidarity, which is most concerned with these developments.

Article 87 of the law states that those found to have accepted funds from foreign bodies, raised donations in violation of the law or spent foreign funds for purposes other than originally specified shall be punished by imprisonment of 1-5 years, and a fine of no less than 50,000 Egyptian pounds ($2,782) and no more than 1 million Egyptian pounds ($55,651).

The same article prescribes the same punishment for anyone found to have participated in or assisted a foreign organization in engaging in civil activism in Egypt without obtaining a license from the agency, or from anyone found to have conducted or participated in conducting opinion polls in the field of civic activism without obtaining official consent from the agency beforehand.

Article 66 of the law warns against all workers in civil society organizations from seeking the assistance of foreigners — whether in the form of experts, or temporary or permanent staff members — without first obtaining a license from the agency in accordance with the procedures specified in the law’s executive guidelines.

Hafez Abu Seada, the president of the Egyptian Organization for Human Rights (EOHR), told Al-Monitor that the presence of 10 agencies to decide on foreign funding hinders the performance of civil society organizations, given that these agencies take a great deal of time to meet until they decide on donations or funding that Egyptian NGOs receive. He said, “It is enough to have one or two agencies; we don’t need all [10] of them.”

He added, “It is also interesting that this article [72] ignores the representation of civil organizations or their general unions. The government has the right to know the source of funding [for NGOs], but it doesn’t have the right to halt the activity of civil society organizations. This article must be modified so that the organizations can do their part without being disadvantaged.”

Gamal Eid, the director of the Arab Information Network for Human Rights, told Al-Monitor, “This law is much worse than Law 84 of 2002, which we viewed as restricting freedoms. It is very unfortunate that the state is attempting to tighten the stranglehold on civil society organizations and fight them with every available tool. Now it is seeking to kill these organizations once and for all through this law.”

Eid added, “This law does not help entrench a culture of civic activism. It seeks to create offices subservient to the Ministry of Social Solidarity instead of [allowing civil] organizations to exercise their freedom and development role. Indeed, it has gotten to the point that this law prevents NGOs from conducting opinion polls of ordinary Egyptians. How can a state that thinks in this way possibly move forward?”

Legal activist Negad el-Borai attacked the law on his Twitter account, writing Nov. 13, “I swear to God that the law not only runs counter to the constitution, but counter to reason. The government would not dare to submit a proposal that kills civil organizations, and so it deputized the MPs in parliament to commit this crime [on their behalf].”

In another tweet the same day, Borai wrote, “The government imagines that foreigners cannot possibly know any information about the civil associations law until after it is issued, [as though it will come] as some sort of surprise to them. … You all are crazy.”

Article 75 of the constitution gives Egyptian citizens the right to form civic associations or institutions on a democratic basis, with legal character upon incorporation. It allows them to operate freely, without any administrative body intervening in their affairs.

For his part, parliamentarian Alaa Abed, the chairman of the parliament’s Human Rights Committee, said in statements to the press Nov. 10 that the law seeks to put in place controls on funding to civil society organizations that would prevent money from reaching “suspicious” organizations, which seek to undermine the Egyptian state. He stressed that this law distinguishes between associations that bring a public benefit and “suspicious organizations” that seek “to destroy the country.”