Egyptian President Abdel Fattah al-Sisi promulgated a new law May 29 that regulates the work of NGOs, but local and international human rights activists and groups say the law is repressive and imposes unprecedented draconian restrictions. 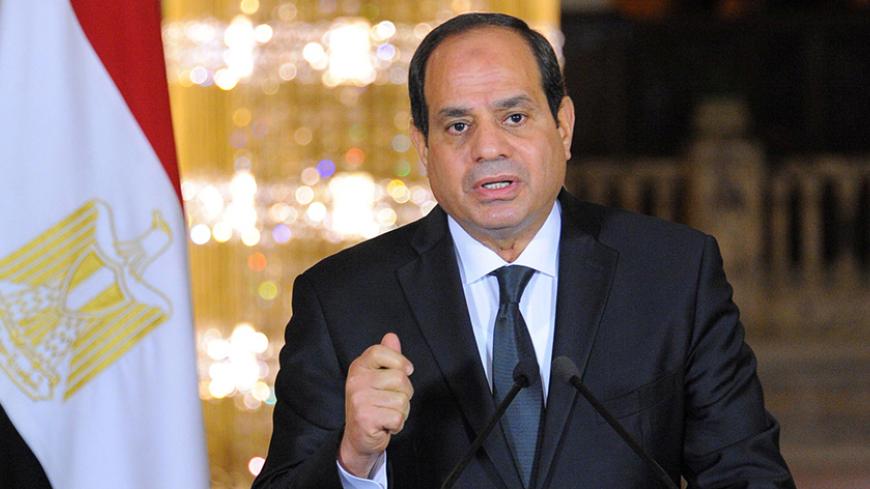 Egyptian President Abdel Fattah al-Sisi on May 29 signed a law that further restricts the operations of NGOs in Egypt. Here, he speaks at the Ittihadiya presidential palace in Cairo on May 26, 2017, following an attack by gunmen in Minya. - The Egyptian Presidency/Handout

The new law has been harshly criticized by human rights organizations, who argue that it cripples the work of NGOs, increases their administrative burdens and sets forth draconian punitive measures against the groups.

Observers say the law restricts the activity of NGOs to performing only those developmental activities needed by the Egyptian government and imposes draconian sanctions on any NGO that violates the government's provisions; the observers say this is tantamount to a breach of human rights.

The new law also prohibits NGOs from carrying out field activities, conducting opinion polls or cooperating with any international bodies without obtaining the required approvals from a newly established body. This body is the National Authority for the Regulation of Foreign Nongovernmental Organizations and includes representatives of Egypt’s top national security agencies such as the General Intelligence Service, the Administrative Control Authority, the Interior Ministry and the Defense Ministry.

The draft law was submitted by Abdel Hady Al-Kasby, the head of the parliamentary Social Solidarity Committee and parliament member for the Egypt Support Coalition, on Nov. 9 and signed by 204 parliament members.

The Egyptian parliament discussed the draft law in two sessions, on Nov. 14 and 16, without subjecting it to a real civil dialogue or to any review by NGOs. On Nov. 29, the law was approved by the parliament and submitted to the president for ratification.

Human rights activists and analysts told Al-Monitor the law includes severe administrative restrictions on NGOs and paralyzes their work, noting that the law's implementation would bring Egypt under international criticism.

Parliament member Mohammed Abu Hamed defended the law, saying that NGO concerns are misplaced and that laws only produce their legislative effect after their implementation. He told Al-Monitor, “Egypt’s Cabinet will issue the implementing regulations of the law within two months at most.”

Article 2 of this law requires all types of NGOs to regularize their situation in accordance with its provisions in terms of registration, the announcement of sources of funding and types of activities within one year of its entering into force.

The article indicated that any NGO that fails to do so shall be dissolved by a court order, its assets shall revert to the Social Fund for Development — a government fund for the support of NGOs — and all of its activity carried out in violation with the provisions of this article shall be suspended.

Lawyer and human rights activist Hafez Abu Saada, the director of the Egyptian Organization for Human Rights, told Al-Monitor over the phone, “It will be difficult for NGOs to regularize their situation since Article 8 of the law requires every NGO — even those operating in Egypt for years in accordance with the law and the constitution — to pay a registration fee up to 10,000 Egyptian pounds [around $553] and submit registration papers and documents. The new law is problematic.”

He said the law was issued despite the objections of human rights groups and NGOs. He added, “The law not only restricts the work of human rights organizations but also the work of charitable and development organizations in Egypt, which will be facing difficult situations. It imposes severe administrative restrictions on NGOs. It is very repressive and intimidates citizens to discourage them from participating in civil society and community work.”

Saada said the draft law sets forth several exaggerated penalties on persons working in NGOs. Indeed, Article 87(a) specifies for an imprisonment sanction ranging between one to five years and a fine not less than 50,000 Egyptian pounds and not more than 1 million Egyptian pounds against anyone who establishes an NGO in violation of the law or cooperates with a foreign organization to practice civil society work without obtaining permits from the competent authorities. It also provides for the transfer of the assets of violating organizations to the Social Fund for Development.

Saada added, “Most countries do not impose restrictions on NGOs in their legislation, contrary to what is happening in Egypt. The new law interferes in every detail of the day-to-day work of NGOs and requires them to obtain permission to conduct an activity from the National Authority for the Regulation of Foreign Nongovernmental Organizations.”

In a statement May 30, Reda al-Danbouki, the director of the Women’s Center for Guidance and Legal Awareness, said, “Under the new law, NGOs cannot accept monetary donations of more than 10,000 Egyptian pounds unless through the donor’s bank account. It also requires the concerned NGO to notify the competent administrative authority upon receipt of any donation to obtain its approval for collecting this donation. This would discourage small donors from contributing to civil society work.”

However, Abu Hamed told Al-Monitor, “We have set these procedures to control the situation. The law will not harm any civil society organization or association that operates under the new law and submits its documents to the competent authority. Those who will be affected by the sanctions imposed by this law are the NGOs that did not abide by any controls. A large number of NGOs have been working without being subject to any controls and are now worried about operating under the new law.”

He continued, “During the discussions of the law, parliament members sat together with a number of owners of NGOs to exchange points of view on its articles. They raised some observations; we took some of them into consideration and dismissed others.”

While Abu Hamed asserted that the law guarantees the independence and promotes the work of NGOs, Waheed Abd al-Majid, deputy director of the Egypt-based Al-Ahram Center for Political and Strategic Studies, told Al-Monitor over the phone, “The new law abolishes the vital role of civil society, and this would weaken all components of the state,” noting that NGOs should have been allowed to review this law before its ratification so as to resolve all outstanding disagreements.”

Foreign bodies also slammed the new law. In a May 31 statement, the European External Action Service said, “The new NGO law in Egypt is bound to put an additional burden on NGOs' activities and restrict the space of debate and discussion in the country. It risks making civil society's contribution to political, economic and social development more difficult.”

The statement added that some provisions of this law are “likely to directly affect European cooperation assistance to Egypt,” since “a large part of our cooperation relies on NGOs as important implementing partners.”

On June 1, Germany's Federal Government Human Rights Commissioner Barbel Kofler expressed her concern about the law in a statement, saying, “It severely restricts rights and freedoms of civil society organizations.”

Ahmad Abu Zayd, the spokesman for Egypt’s Ministry of Foreign Affairs, responded to these criticisms in a statement June 1, saying that legislators, while drafting the law, were keen on "modernizing the legislative framework governing the work of NGOs in line with the principles and provisions of the constitution.”

He added, “The law seeks to bring all NGOs — about 50,000 organizations — under one legal umbrella and sets specific controls for the financing of NGOS pursuant to the principles of transparency and the rule of law, without any intention to cripple their work.”