IDF chief of staff speaks out on IS, Syria, Iran

Chief of Staff Benny Gantz does not exclude the possibility that in the future, Israel will have to deal with the Islamic State, saying, "If they would take us on, they would fail." 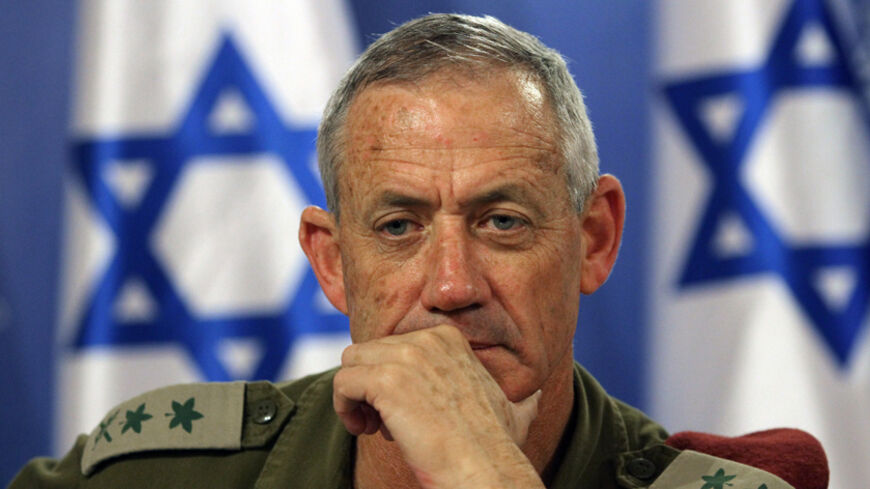 The chief of general staff of the Israel Defense Forces (IDF), Maj. Gen. Benny Gantz, will conclude his four-year tenure in the middle of February 2015. The Protective Edge campaign tarnished his public image and, for the first time, he became the target of scathing criticism, mainly from the right flank of the Cabinet. On Oct. 4, in honor of the Day of Atonement, Gantz gave rare interviews to several Israeli media outlets.

Gantz, who was fourth on the list for the chief of staff position (he was preceded by Maj. Gen. Yoav Galant, whose nomination was disqualified, and two other generals who turned down the offer) — is widely regarded as a calm person who detests risk-taking and doesn’t encourage waging war. There are many Israelis who feel that the military and its leaders should always strive to be proactive and make plans for future assaults. They feel that it is the role of the political echelons to restrain the armed forces, to deliberate and decide. But during the Protective Edge campaign it was actually the IDF that took on the task of restraining and frightened the Cabinet with the possible ramifications of a Gazan conquest, striving to end the fighting as soon as possible.

Gantz’ name was recently mentioned as a candidate for replacing Israeli ambassador to Washington Ron Dermer. This summer will mark two years of Dermer’s catastrophic term of office. Dermer has no foothold in the White House and is viewed as a Republican Trojan horse, planted by Prime Minister Benjamin Netanyahu in the very heart of the US capital. Since Dermer is a political and not professional appointee, his position may be terminated after two years. Gantz is viewed as the ideal replacement for many reasons: He has served as an Israeli military attaché in Washington, he studied in the United States twice in the course of his career and he has a temperament suited to working in Washington. Gantz is also held in great esteem by the Pentagon, he is familiar with the United States and, though his political views are enigmatic, the impression is that he could rehabilitate whatever Netanyahu, billionaire Sheldon Adelson and Dermer have left of the Israeli-US relations.

But will Gantz really get the job? It is highly doubtful. Netanyahu, who took pains to isolate himself at the Israeli top and forestall all potential competitors, is not likely to cooperate in building up Gantz as a political alternative.

In an interview earlier this week, one of the questions Al-Monitor asked Gantz was why Israel downed the Syrian plane that flew over the Golan Heights Sept. 23.

“Because it crossed the border, period,” he answered. Pressed and queried further — doesn't it seem rather obvious by now that Israel prefers the rule of Syrian President Bashar al-Assad in the Golan over the chaos of Islamic insurgent organizations? He said, “We don’t intervene in the fighting. This isn’t a reality show and it won’t help if we vote for this candidate or the other. All we can do is keep close track of the situation and insist on the clear red lines that we have drawn: No incursions into our territory. That plane penetrated almost a kilometer [.62 mile] and that’s why it was downed, and it’s a good thing that it was downed.”

Gantz gave an extensive overview of the Syrian issue. “The whole system in Syria is falling apart and being rebuilt in front of our eyes, at its own pace. It isn’t happening quickly. Now we can already see clear spots on the map, spots that have been drawn for quite some time already and are starting to become stabilized. The central axis, from Damascus northward until the coastal area, including the Alawite space, is held by Assad. The Golan Heights has fallen into the hands of all kinds of insurgents. The southern region — Jabhat al-Nusra; the center and northern regions — a different make-up of insurgents. [Most of] the Syrian Desert is empty while the remote Syrian desert is inhabited by the Islamic State (IS). Jabal Druze is held by the Druze. This is the tribal-religious map that is beginning to coalesce. We have no influence and no role in this game, except for keeping close tabs on it and making the correct military plans and deployments.”

Al-Monitor asked the chief of staff if the IDF had assault plans, in the event that a significant threat emerges against Tiberias and the Sea of Galilee region, a new situation that might entail shots being fired into Israel.

“We are prepared for all scenarios and have created alternative options for action,” Gantz answered. “We’ll choose the most suitable one.” The chief of staff summarized the preparations carried out by the Israeli defense system in case of governmental disintegration in Syria. “Already on May 15, 2011, when the demonstrations in the Golan spun out of control and hundreds of Syrians penetrated into our territory, we understood that the game plan had changed. We replaced our IDF division on the Golan; we changed our military outlook and deployment; we are better prepared today than in the past and continue to improve our response. We understand that a challenge waits for us on the other side. At the moment, the only thing that separates us from IS is the fact that they are busy with more pressing issues. It is possible that the day will come when we will have to contend with them.”

Al-Monitor asked Gantz about IS. Perhaps the panic is exaggerated? Is is possible that the global alarm has lost all proportion?

“Every time that IS encounters an organized military force that is determined and cohesive, and not a disintegrating system, they fail,” Gantz said. “The reality surrounding us is very unstable, but we have a clear rejoinder to IS and if they took us on, they would fail. IS exploits the political and governmental vacuum in the environs in which it operates. They understood the US principle of ‘shock and awe.’ The Americans achieved this effect through a thousand Tomahawk missiles. The Islamic State achieves this via beheadings. They are trying to create new geopolitical lines on the basis of Islam as a governmental, not only religious, concept. They are dismantling everything that was outlined by two gentlemen, Sykes and Picot, long ago in the previous century. On the other hand, I think that this threat can be contained; it can be dealt with and it can be neutralized.”

Al-Monitor asked if this could be accomplished from the air alone, as the current operations are being conducted.

“I don’t think so,” he said. “It can’t be achieved only through an aerial assault. I heard what Gen. Martin Dempsey, the American chairman of the Joint Chiefs of Staff, had to say and I understand his point. It makes no sense that America should also fight on the ground on behalf of the people threatened by IS. It makes more sense that those people organize the necessary ground forces themselves.”

In the interview, Gantz talked about everything: the critical timing of the talks between the West and Iran (“I hope that the Iranians won’t be tempted to return to the nuclear race, and I hope that the West won’t allow them to do so. The Shiite-Sunni conflict also knocks on Iran’s doors. We don’t want to live with a nuclear Iran.”), about the Protective Edge campaign (“We won that,” he says, “unequivocally.”) and many other subjects. At the moment, Gantz’ main efforts are invested in dealing with the difficulties of the defense budget and his main mission: to successfully conclude the rest of his term without additional surprises or problems.

Two days after the interview, a summit was held Oct. 1 in Washington between President Barack Obama and Netanyahu. Expectations were very low, as usual. The meeting itself took a bit longer than had been planned, and seemed a bit warmer and more optimistic than the parties had anticipated. But a short time afterward, when it emerged that another construction tender was being publicized in Jerusalem, the White House hurried to produce a raging condemnation (“The process poisons the atmosphere in the region.”). This move came after the 11 apartments were acquired in the Palestinian Jerusalem Silwan neighborhood by settlers who lived there and significantly ratcheted up the tension in the area.

Netanyahu, in a briefing to journalists in Washington, launched an extensive verbal attack on the US criticism. “I don’t accept it,” he said, “You have to know your information [before you criticize].” Then he continued to give a forceful, confrontational explanation speech, in response to the condemnation.

In the past, such disputes would erupt only after the Israeli prime minister left Washington, but not this time. The Americans did not hesitate to strike Netanyahu only minutes after his meeting with Obama. Even more intriguing is that Netanyahu did not hesitate to answer assertively while still on US soil. It seems that of the two heads of state, Netanyahu leads — at least with regard to self-confidence.