Israeli experts are cautious about predicting events in Syria, but concede that despite losses by Hezbollah there, the organization might attack Israel unexpectedly from the Lebanese border. 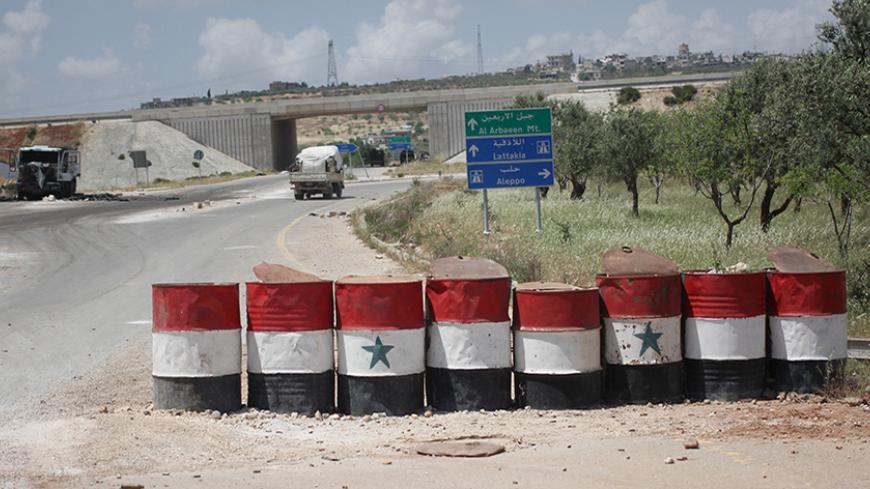 A view shows a checkpoint used by forces loyal to Syria's President Bashar al-Assad in the northwestern city of Ariha, after a coalition of insurgent groups seized the area in Idlib province, May 29, 2015. - REUTERS/Abed Kontar

Israeli Deputy Chief of Staff Maj. Gen. Yair Golan, who previously headed the Northern Command, addressed a Tel Aviv University conference June 1 to mark 30 years since the Israel Defense Forces’ establishment of the security zone in southern Lebanon. He said, “From a strategic perspective, our situation in the northern arena may be better than ever.” On the other hand, Golan added that Hezbollah now possesses formidable, unparalleled capabilities that no other terrorist organization ever had, and is capable of threatening all of Israel’s population centers. Oh, and that the Islamic State could develop into a “disturbing future threat.” He added, “The Syrian army has, for all intents and purposes, ceased to exist.”

Golan's statements come on the heels of a string of harsh setbacks for Syrian President Bashar al-Assad from the various insurgents in Syria. There are clear, perhaps unprecedented signs that the Syrian regime may actually fall in the foreseeable future. You won’t find anyone in Israel willing to go out on a limb with a prediction on this issue, after many experienced people made the mistake of eulogizing Assad innumerable times in the past (including former Defense Minister Ehud Barak). Meanwhile, those doomsayers themselves have disappeared from the scene, while Assad remains. Nevertheless, despite the consternation regarding the general atmosphere of uncertainty hovering over the current situation, Israeli security elites are beginning to formulate interesting insights regarding the configuration on the northern front.

A high-level Israel Defense Forces (IDF) officer possessing expertise on the northern arena told Al-Monitor this week on condition of anonymity, “Take [Hezbollah Secretary-General] Hassan Nasrallah, for example. Every year around May 24 we’d get fireworks and festivities from him. It’s his yearly speech on the anniversary of the IDF’s exit from Lebanon, which is actually Hezbollah’s independence day. In this annual speech he exhibits self-confidence, arrogance and euphoria as he fluently and verbally castigates Israel. After all, it was on this date that he first delivered his famous ‘spider's web’ speech, in which he compared Israeli society to a cobweb lacking stamina and endurance.

“And what happened on May this year?” asked the officer. “Suddenly we found a completely different Nasrallah. He delivered three speeches in a week, each of which was more hysterical than the last. For the first time, Israel occupied a negligible place in his speeches. Suddenly he’s talking about an existential threat to Hezbollah. That they need to mobilize and defend their homefront. That ‘they are coming to rape our daughters and wives.'

“This is a strategic event,” said the officer. “We should not underestimate the power of this message and its effect on the region.”

The officer said Israel is tracking Nasrallah’s torments with a certain measure of satisfaction and gratification. “When was the last time he took a foreign news correspondent and showed him Israel from Hezbollah’s observation post? When was the last time that he showed foreign reporters how an Israeli Merkava tank looks from their side? He used to do this all the time. [But now] he is up to his neck in the Syrian arena, he loses dozens of fighters a week, he is the target of lethal criticism in Lebanon and is in real danger. On one hand, we don’t really feel sorry about this situation. On the other hand, it’s clear to us that this tension is likely to create unexpected complications.”

In Israel, people are using a familiar expression coined in 2007: “miscalculation.” This term refers to a long line of misunderstandings and incorrect readings of the situation from both sides of the border fence, which could lead to an explosion. At the time, the Israeli public was primed for the possibility of a miscalculation in the summer of 2007, a type of reciprocal deterioration on both sides of the border in the northern sector that could sweep the sides into war without any prior planning. No one really understood where this “miscalculation” popped up from. It was only after the fact — after the mysterious planes bombed the Syrian nuclear reactor in Deir ez-Zor in July 2007 and foreign sources attributed this operation to Israel — that the cat was let out of the bag. The IDF understood that such an operation could force Syria to descend into war, so it took the necessary preventive measures. But Assad would give anything in the world to go back in time to that merry era. He would prefer to lose the nuclear reactor again and even perhaps enter into a catastrophic military engagement with Israel, if only he could avert the current situation.

In any case, Israel took great care this week to transmit a discreet message to Hezbollah, backed up by overt declarations by Prime Minister Benjamin Netanyahu and Defense Minister Moshe Ya'alon. Just to be on the safe side, the message was that Israel’s annual homefront exercise, “Turning Point 15,” which began May 31, has no malicious intent. “At a time when Nasrallah is fighting for his life and tensions in Beirut are as high as can be, it’s better to spell things out and not leave anything up in the air,” they say in the IDF.

Now let’s move on to Syria. “The Syrian state won’t be reconstructed even in 50 years’ time,” an Israeli intelligence source told Al-Monitor on condition of anonymity. “Even if all the money in the Middle East is funneled only to Syria and the war ends, it will take at least 50 years to reconstruct what is happening there,” he said, and told a little story.

Less than a year ago, a senior IDF officer visited the improvised military hospital in the Golan Heights that treats Syrian refugees coming from across the border. There he met a small 10-year-old boy who had crossed the border between Israel and Syria alone and showed up one day at the hospital. “My mother told me to go southward by foot, until I arrived,” he told the astonished Israeli soldiers. The senior officer met the boy two days after he had arrived. He had been treated by the soldiers and became the hospital’s “adopted son.”

“This is the first time in three years that I’ve eaten a dairy dessert,” the boy told the officer with great satisfaction. Then the officer asked him about what is happening in his native village, Jubata el-Hashab.

“Not much,” said the boy. “Father went to look for work a month ago and did not return, maybe he was killed. My brother was killed by a big charge that exploded on the street, the village is full of dead bodies rolling around the streets, there is no work and no one has food. My stomach hurt me terribly, so Mother told me to walk south until I reached the Israelis, and that’s what I did.” The officer photographed the boy for a keepsake and asked him if he is still afraid. “Yes,” the child answered. “I’m afraid of being returned there [by Israel].”

“Syria no longer exists,” the same officer told Al-Monitor this week. “Losing Palmyra is like Israel losing [its largest southern city] Beersheba.” Asked how much longer Syria could go on, he answered, “No one knows. We’ve learned a little humility; it is very hard to calculate the survivability of a regime and of honor. There is a syndrome we call the ‘onion-sack syndrome.’ On the roof of every house rests a sack of onions. They can live on that sack for three years, on onion soup and fried onions and stuff like that. The situation there is very unclear. They are fighting tooth and nail for honor and also for life. All we can do is watch from the side.”

Al-Monitor asked one last question: whether Israel is concerned about IS. “Not really,” answered the officer. "At the moment they are not relevant. They are good at fighting this type of war, but not beyond that. On the other hand, we have learned that in this area, we should not underestimate anyone or anything, so we don’t.”