The truth about Turkey and Islamic State oil

While oil sales by the Islamic State across the Turkish border are a real problem, the Turkish government does not condone it. 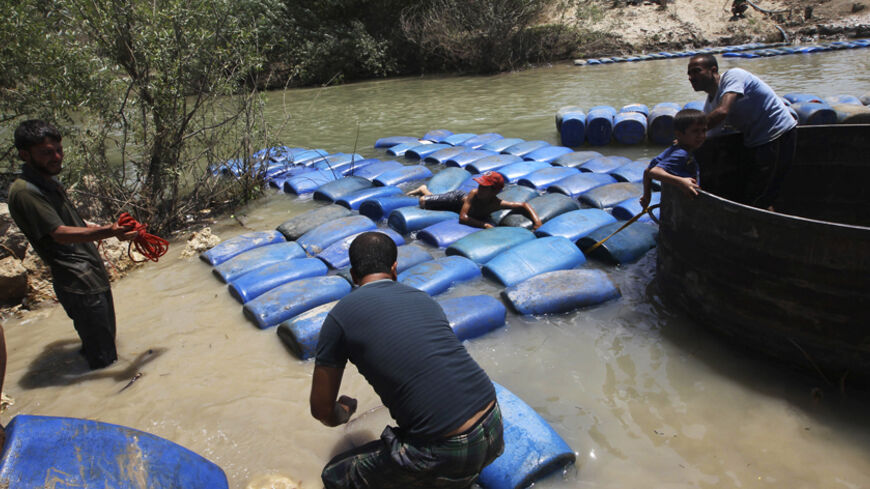 A group of men smuggle diesel fuel from Syria to Turkey, May 26, 2013. - REUTERS/Muzaffar Salman

The Sept. 20 release of 49 Turks held by the Islamic State (IS) for 101 days came as a great relief for Turkey. They were the diplomats and other consulate personnel (along with their families, including two infants) taken hostage in June when IS captured Mosul. Since then, the Turkish government had argued, reasonably enough, that its hands were tied in not joining the US-led coalition against IS. Now, however, with the end of the hostage crisis, Ankara might begin to think more actively about the threat just across its southern border.

Where exactly does Turkey stand on IS? This has become a matter of controversy in the country and in the West. The Turkish government has been criticized on three main points: that it has not done enough to close its borders to the flow of foreign fighters joining IS; that it has not done enough to curb radical groups at home that recruit for IS; and that IS makes money by selling oil via Turkey.

In response, one could note on the first point that Turkey’s southern border is indeed too porous, but this is because of its length, some 750 miles, the tough terrain and Ankara’s “open border” policy, which has saved 1.5 million refugees since the beginning of the Syrian civil war.

On the second point, regarding IS recruits, Ankara certainly needs to be more cautious, but it is also worth reminding that the number of recruits from France, the United Kingdom and Russia exceed those from Turkey.

The third point, the matter of the oil sales, also deserves fair assessment. This trade has been discussed recently by the US Senate Foreign Relations Committee and also brought into focus by The New York Times, Bloomberg Businessweek and a report in Al-Monitor by Fehim Tastekin. As Tastekin explains, the issue is not about official trading, but smuggling, mostly through “small-diameter plastic pipes normally used for irrigation.”

To understand why and how this happens, one should know that smuggling is a well-established tradition across Turkey’s southeastern borders with Iraq and Syria. Oil is expensive in most of Turkey, but cheap in the south. This has created an illegal but widespread south-north trade route. The smuggling economy is not just about oil, however, but also includes other popular items and commodities, such as tea. (If one orders tea in southeastern Turkey, the servers often ask, “Do you want normal tea or smuggled tea?”)

For decades, successive Turkish governments have tolerated this illegal trafficking based on some strategic logic. The 30-year war between the state and the Kurdistan Workers Party (PKK) impoverished the southeastern region, diminishing revenues from agriculture and husbandry. Smuggling remained the only source of income for some villages. “Pro-state” (anti-PKK) villages especially benefited from the government’s benign neglect, which was a form of compensation for their loyalty. The December 2011 accidental bombing of 34 smugglers from Roboski village by the Turkish armed forces was a horrific tragedy that exposed this tradition. Villagers revealed to the press that until that day, the soldiers always looked the other way when they “went out to smuggle.”

In other words, the reported smuggling of IS oil across the Turkish border is a problem that Turkey needs to confront. As Tastekin reported, “The state began to intervene after the international media started to question … whether IS oil was being sold in Turkey.” It is, however, a problem that is more complicated than it seems at first sight. It is a matter not just of terrorism, but also of the local economy.

Smugglers on the Turkish side of the border often do not know whether they are buying oil from IS sources. As Tolga Tanis, a Washington-based Turkish journalist, noted, “Oil changes hands so quickly that buyers do not know that they are getting oil that originates from IS.” In addition, as Tastekin reported, smugglers in Hacipasa, a Turkish village near the Syrian border, “prefer to think of the Free Syrian Army, not IS, as benefiting from the trade.”

The key question is how much of an illegal trade is there? The New York Times cited experts who placed the figure “at $1 million to $2 million a day.” Speaking to Al-Monitor, a presidential adviser who preferred to remain anonymous dismissed this claim. He said, “This is impossible. A barrel of oil would be sold for about $50 on the black market. This means 400,000 barrels of oil a day passing illegally from Iraq or Syria to Turkey. Yet, such an amount is impossible to carry by any of the smuggling methods, such as hoses, trucks or mules. There is indeed smuggling on the Turkey-Iraq and Turkey-Syria borders, but certainly not at these levels.”

The official also noted that such large amounts of oil could only be in the form of crude oil, but none of the two refineries in Turkey, at Tupras and Aliaga, could process smuggled oil. Concerning the broader picture, he said that the rise of IS confirmed Turkey’s earlier warnings to the West: The Free Syrian Army did not get the support it deserved in the earlier phase of the conflict, and this mistake paved the way for the rise of more militant groups, such as IS.

The bottom line is that while IS oil sales via the Turkish border is a real problem, it is not something condoned by the Turkish government, as emphatically noted by Energy Minister Taner Yildiz in a press conference. Turkey’s Western allies would be wise to approach Ankara with an understanding of the nuances involved and aim for more cooperation, rather than blaming Ankara for things that are beyond its full control.