Turkey pivots to Baghdad to close deal on Kurdish oil 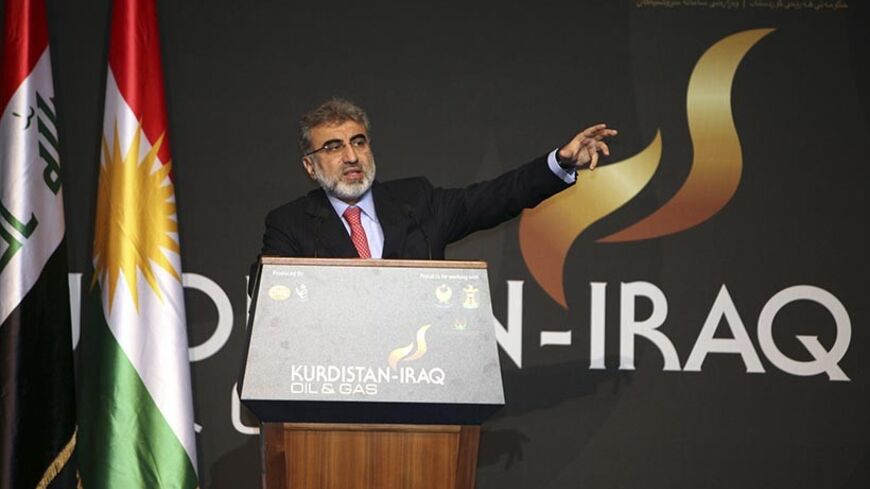 Turkey has become aware that the northern Iraq oil stockpiled in Turkey cannot be sold on the world market without Baghdad's approval and has begun developing appropriate new policies.

Since 2011, when relations with the Maliki government seriously deteriorated, Ankara has been striving for economic integration with the northern Iraq Kurdish administration. Most of the schools, hospitals, hotels, mass housing, roads, bridges and infrastructure in that region have been built by Turkish companies. Most of their food supplies come from Turkey. But that rosy situation began to change when oil and natural gas got into the picture.

When Turkey and the Kurdistan Regional Government (KRG) agreed to sell the oil of the region via Turkey’s Ceyhanli [Yumurtalik] port to foreign markets, the United States and Baghdad were disturbed. On Feb. 5, 2013, US Ambassador Francis Ricciardone told journalists in Ankara: “About oil and gas, Turkey should establish relations not with 20% of north Iraq but the remaining 80% of Iraq.”

On a later occasion, Ricciardone expanded on this statement: “We want the Iraqi government to be content with an agreement between Turkey and the Kurdistan Regional Government. It is important for Ankara-Baghdad and Erbil to be in close contact for their common interests in exporting gas and oil.”

These statements were polite warnings in diplomatic language.

Iraqi Prime Minister Nouri al-Maliki was disturbed by the situation and this led to tensions in Ankara-Baghdad relations. On July 10, 2008, when Turkish Prime Minister Recep Tayyip Erdogan visited Baghdad, he had signed an important accord with Maliki and a “High-Level Strategic Cooperation Council” was set up between two countries.

This was followed by 36 other agreements signed in 2009. A new era of close cooperation was to begin on transportation, health, foreign trade, construction, agriculture and animal husbandry.

But Turkey-Iraq relations began to sour before any of these projects came to life. Iraq issued an arrest warrant for its Sunni vice president, Tariq al-Hashemi, on allegations he was planning to assassinate Shiite leaders, including Maliki. Hashemi first took refuge in northern Iraq and, at the beginning of 2012, came to Turkey. Maliki asked for his extradition but Turkey refused.

Turkey and Baghdad also went their different ways over Syria. The tension peaked when Maliki declared Turkey an "enemy" and 36 agreements were shelved.

Meanwhile, Turkey significantly improved its relations with the KRG. The administration of KRG President Massoud Barzani designated Turkish companies as the lead in construction activities. Cooperation agreements were signed for oil and natural gas. There was an effort for full economic integration between Turkey and the KRG. This was followed by political integration between the Justice and Development Party (AKP) government and Barzani.

According to their agreements, in the first phase 10 billion cubic meters of natural gas is to be transferred to Turkey, of which some will be consumed in Turkey and the rest will be exported to Europe.

Natural gas imports from northern Iraq were scheduled to begin in 2015. But according to information given to Al-Monitor from sources in the Energy Market Regulatory Agency (EPDK), the natural gas transfer was likely to be delayed until 2016 or even 2017.

The storage tanks in Ceyhan are about full, but the oil cannot be sold because, according to the Iraqi Constitution, permission from the Baghdad government is essential. Baghdad meanwhile is threatening potential buyers with imposing an embargo. This threat of the Iraqi government, which has the world's third-highest oil reserves with 143 billion barrels, discourages buyers.

That is why Turkey, which was initially saying, “We can’t ignore the energy resources next door to us,” has been revising its attitude of sidelining the Iraqi government. No wonder that Taner Yildiz, Turkey’s minister of energy, cited Iraq as the owner of the oil in a May 13 statement: “This is Iraq’s oil and Iraq will sell it.”

There are now reports that the KRG and the Iraqi central government are about to overcome the barriers between them. Yildiz, in his latest statement about the issue, said, “The tanks we reserved for northern Iraq are full. There are 2.5 million barrels of oil at Ceyhan. There is no problem for their sales. We are determined to maintain our relations with Baghdad at higher levels than perceived by public opinion. Iraq is important for us and we are important for Iraq. Our relations with Iraq are at excellent levels.”

These remarks clearly point to changes in Turkey’s Iraq policy. After a long period of tension, there are visible signs of desire to revert to the “2009 spirit” in Turkey-Iraq relations.

Mutual visits by the foreign ministers, energy ministers and parliamentary speakers of Turkey and Iraq nourished the hopes that the cooperation would develop. Now there are efforts to realize visits by both prime ministers.

The first goal is to dust off the shelved accords. According to information obtained by Al-Monitor, Turkey’s position on northern Iraq oil is this: Turkey accepts northern Iraq oil as belonging to the entirety of Iraq and thinks there is no legal impediment to Turkey moving it. Turkey has one expectation: to deposit the reimbursement for oil to Turkey’s Halkbank and to share the data about it transparently with Baghdad and Erbil.

While there is a search for customers in the international market for the oil stored at Ceyhan, Turkey’s TUPRAS (Turkish Oil Refineries Corp.) is mentioned. But to avoid being placed on Iraq’s black list, TUPRAS is keeping its distance for the time being.