Under US pressure, Turkey focuses on relations with Baghdad 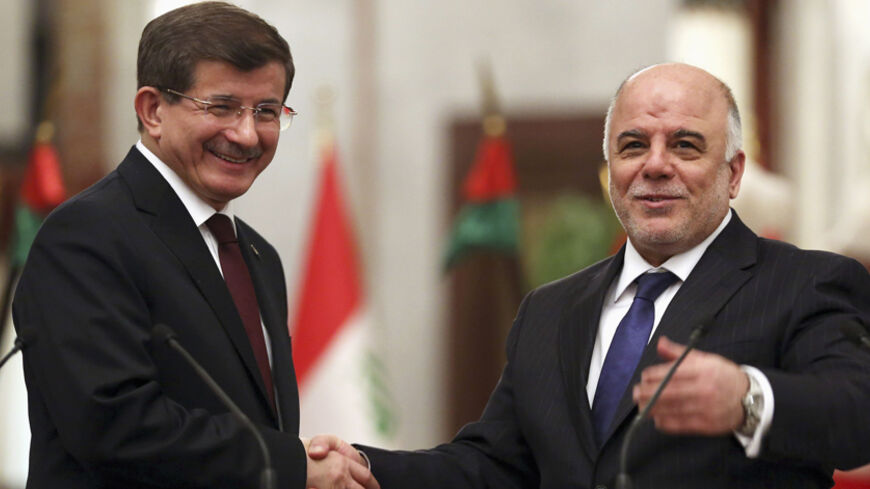 The visit of Turkish Prime Minister Ahmet Davutoglu to Baghdad, three years after the 2011 visit of then-Prime Minister Recep Tayyip Erdogan, has to be seen as a new start between the two countries.

This visit may well signal a serious changing of tracks of Turkish diplomacy, which under Erdogan and then-Foreign Minister Davutoglu was perceived as a Sunni-oriented neo-Ottoman Middle East policy. The New York Times wrote that Davutoglu had shown in this visit that he has abandoned his passion for a “Sunni axis.”

Only when the price of this diplomacy turned out to be “regional and global isolation” did Turkey become aware of the need to switch tracks. Although government quarters tried to justify the point Turkey had reached as “dignified loneliness,” they found out that they had to face Middle Eastern reality.

Davutoglu’s visit, which came three months after the formation of a new Iraqi government under Haider al-Abadi, was also on the heels of major steps to sort out the problems between the Kurdistan Regional Government (KRG) and Baghdad.

Davutoglu’s visits to Baghdad and Erbil emerged as signals of a new period in ending the tensions between the two countries and a joint determination to rebuild military, economic and diplomatic relations. There are several reasons that motivated the Justice and Development Party (AKP) government toward this substantial change, which started with Iraq policy but which soon might also affect Turkey’s overall Middle East policy:

The mounting threats from the radical Sunni IS terror group adjacent to its borders compelled Turkey to review its policies. When asked in Baghdad about Turkey’s support of IS, Davutoglu dismissed it as baseless.

The US position that its priority in Syria is not Assad but combating IS compounded Turkey’s isolation. Ankara also could not ignore the new process in Iraq that began with US pressure on former Prime Minister Nouri al-Maliki to withdraw and replace him with Abadi.

The United States had earlier stated that it didn’t approve of Ankara signing agreements with the KRG on oil, natural gas and in other areas by sidelining the legitimate Baghdad government and marketing Kurdish oil to world markets.

Davutoglu’s remark, “We have missed Baghdad,” reflected an intention to forge strong cooperation between the two countries with military, political and economic steps. Turkey’s allowing peshmerga forces to move to Kobani via Turkish territory was one such sign. Davutoglu said if needed there would be further permission for peshmerga to move through Turkey and that Turkey would assist in military training of peshmerga.

Davutoglu, by emphasizing that not only the KRG, but Iraq’s overall national security and stability are important for Turkey, indicated there would be further military cooperation, including on the war on terror.

The accord between Erbil and Baghdad on sharing of oil revenues, as well as Hoshyar Zebari’s assumption of the Ministry of Finance in the Abadi Cabinet, thus ensuring the Kurdish share, will certainly contribute to the improvement of economic ties between Turkey and Iraq.

The High Level Strategic Cooperation Council was established between the two countries in 2008, but remained dormant because of troubled relations. Now the council is expected to be reactivated during the visit of Abadi to Ankara, scheduled for Dec. 24-25.

One of the major issues it is expected to tackle is to annul the decision of the Maliki government banning the Iraqi Ministry of Trade from working with Turkish companies and excluding Turkish companies from bidding for about $500 billion worth of infrastructure construction contracts.

Then there is the cancelation of permits issued to state-owned Turkish Petroleum Corp. (TPAO) for exploring and producing oil. The first council meeting is expected to renew the licenses to TPAO and allow it to explore for oil in new fields.

The council is likely to revive the Basra-Baghdad-Ceyhan Oil pipeline project and thus provide oil from southern Iraq a second outlet to the world.

The Kirkuk-Yumurtalik (Turkey) pipeline, which has not been operating at full capacity because of the conflict between Erbil and Baghdad, is likely to be brought up to full capacity and thus further boost Iraq’s oil revenues,

The first positive sign of this came when Davutoglu was in Baghdad. The Iraqi Oil Ministry announced that the Kirkuk oil was flowing through the pipeline from the Kurdish region to Turkey, with 150,000 barrels a day reaching the Turkish port of Iskendurun.

Turkey earns $1 per barrel of Iraqi oil exported from Iskendurun. The Iraqi oil revenue is deposited at Turkey’s Halkbank, a public bank. Turkey also gets paid for transporting the oil and for port services. This also provides a guaranteed source of oil for Turkey.

The chairman of the Turkish-Iraq Business Council, Ercument Aksoy, says returning to former levels of Turkey-Iraq relations will mean boosting Turkey’s exports to Iraq to $3 billion per month.

The scheduling of the visit of Iraqi President Fouad Massoum to Ankara immediately after his visit to Tehran will certainly need to be seen as a message to Ankara of Iran’s influence on Iraq and that Tehran will always be in the loop in Turkey-Iraqi relations.

The newly reformatted relations between Turkey and Iraq, which supports President Bashar al-Assad in Syria along with Tehran, is the harbinger of a potential change in Ankara-Tehran and Ankara-Damascus relations.