The Middle East is divided into three blocs, but all have a common enemy in the Islamic State. 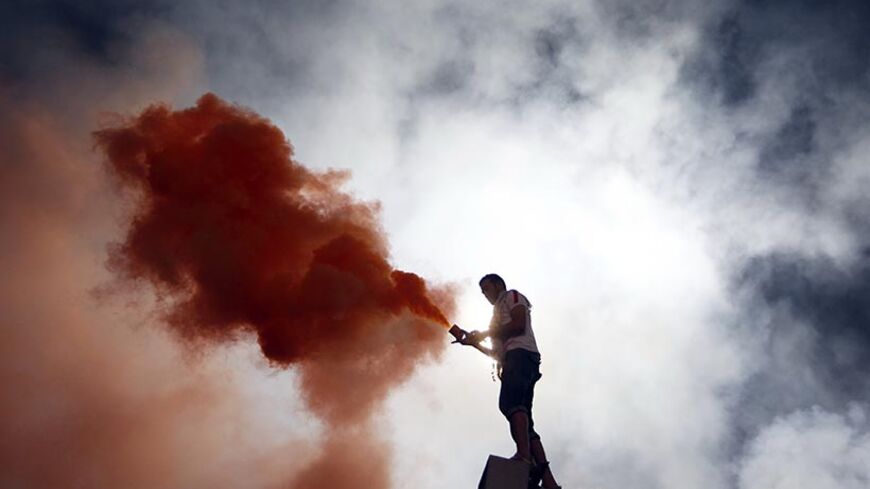 The US invasion of Iraq in 2003 was vital for the restructuring of alliances in the Middle East. That is when the foundations for what were then the two main blocs in the region were laid, leading the way toward a new order that divided the region between pro-US and anti-US countries.

The fall of Saddam Hussein, the heightened and continuous Israeli-Palestinian crisis, Hezbollah’s rise in Lebanon amid the liberation of south Lebanon and the Syrian-Iranian alliance were all aspects forming the landscape of the resistance and resilience bloc; it raised anti-US mottos and gained grassroots popularity for expressing stances that tickled the dreams of a public that had suffered waves of disappointments during the past half a century. This bloc brought together Islamists, nationalists, leftists and anarchists; it connected Iran, Syria, Hezbollah and the Palestinian resistance factions (for example, Hamas, Islamic Jihad and the Popular Front for the Liberation of Palestine).

On the other side of the stage, the moderation bloc addressed the region with what it called realism. This grouping was ready for peace with Israel and had excellent ties with the West, mainly the United States, attracting the liberal elites, ex-leftists, Wahhabi Islamists and businessmen. The bloc presented itself as the only partner the West and the United States could rely on in the region in facing the axis of resistance; it brought under its umbrella Saudi Arabia, Jordan, the Palestinian authority, Morocco, Bahrain, the United Arab Emirates (UAE), Kuwait and Egypt, along with other minor countries that were on the sidelines of the events.

The assassination of former Lebanese Prime Minister Rafik Hariri on Feb. 14, 2005, was a turning point in the relations between the two axes. The moderation bloc, directly and indirectly, accused the Syrian regime of responsibility for the massive truck bomb that ripped apart the Lebanese capital and saw 22 people die along with Hariri. A year and half later, the 2006 war between Hezbollah and Israel widened the rift. Saudi Arabia accused Hezbollah of launching "uncalculated adventures" that precipitated the latest Middle East crisis. Amid the 2006 war, Qatar entered the resistance axis amid a campaign of support that it led on the diplomatic front, besides the extensive pro-Hezbollah coverage on the new Qatari-owned TV network Al Jazeera.

Until March 15, 2011, the map of alliances in the region remained unchanged; however, from the moment people in Syria took to the streets, the resistance bloc started to show cracks. In a few months, Qatar and Turkey both wound up completely on the opposite side of the resistance bloc, though not with the moderation bloc. Before the Syrian revolution, Egypt, Yemen, Libya, Bahrain and Tunisia also saw people calling for freedom, where people took to the streets in a phenomenon that came to be known as the Arab Spring. In Egypt, Libya and Tunisia the Muslim Brotherhood helped lead the change, with obvious Qatari support. An unannounced Muslim Brotherhood bloc was formed with the patronage of both Qatar and Turkey; the latter had some issues to settle with the Libyan Muslim Brotherhood. Ankara refrained from providing support against then-Libyan leader Moammar Gadhafi, despite its decision later to give full support to the revolution in Syria and to post-revolution Egypt. The Palestinian resistance group Hamas was also part of the coalition, yet it showed a bit of uncertainty by keeping one leg in the resistance and resilience bloc.

In Libya the Islamists lost the election, while in Tunisia they lost their influence after a comeback by leftists and nationalists, without being removed from power, while in Egypt the Muslim Brotherhood was toppled after the June 30, 2013, demonstrations that led to the ousting of President Mohammed Morsi and his Muslim Brotherhood-backed Cabinet. Qatar, Turkey and Hamas once again found themselves alone with greater pressure from the moderation bloc, given the historic rivalry between Saudi Arabia, Turkey and Qatar. Attempts to recast the resistance bloc were made and pressure was exerted, but many differences blocked confidence building, mainly due to the ongoing bloodshed in Syria. Turkey, Qatar and Hamas built their own bloc, which enjoyed strong influence in the region thanks to its effective media reach and the influence the Muslim Brotherhood still has on the ground in several areas around the region.

The revolution turned into a civil war in Syria, reflecting the iron bond that brought together Syria, Iran and Hezbollah. Later, with the spillover of the Syrian crisis into Iraq, Baghdad became the fourth pillar of this bloc, maintaining what Jordan's King Abdullah once described as the Shiite crescent. The grouping changed its name from the resistance and resilience bloc to the resistance and confrontation bloc, a clear indication of the strategy the bloc decided to adopt. Tehran, Damascus and Baghdad, along with Hezbollah, reiterated their accusations against the Qatari-Turkish bloc and the moderation bloc of backing the militants in Syria and Iraq; meanwhile, the other blocs continued to accuse the resistance bloc of committing crimes in Syria and Iraq.

After the removal of Morsi as president, the moderation bloc regained Egypt, while retaining control over Jordan, the UAE, Bahrain, Morocco and Saudi Arabia. The monarchies showed immunity toward change, except for Bahrain and the eastern parts of Saudi Arabia, yet this wasn’t a game-changing element. Riyadh and Manama accused Iran of fueling the uprising by giving support to the opposition. Iran’s media played a vital role in showing the world what was happening in Bahrain and eastern Saudi Arabia, though there was no solid proof that its support involved anything more than media coverage.

With a seeming maximum number of conflicts and crises, a new Middle East order has taken form. The new scenario sees three main blocs fighting each other on several fronts, with each looking to weaken its foes to prevail. The fact is that all three blocs are today facing a tougher enemy that poses a threat to all of them. The Islamic State (IS), which each bloc accuses the other of backing, supporting and financing, seems to be watching the struggle for victory among the warring sides with much content and happiness — for the more they fight and weaken each other, the greater the odds are for IS to prevail.