The dispute between Saudi Arabia and Qatar is playing out within the context of Iran’s improved ties with Doha, Qatar’s rethink of its Syria policy and Tehran’s initiatives to expand its influence with Palestinian factions. 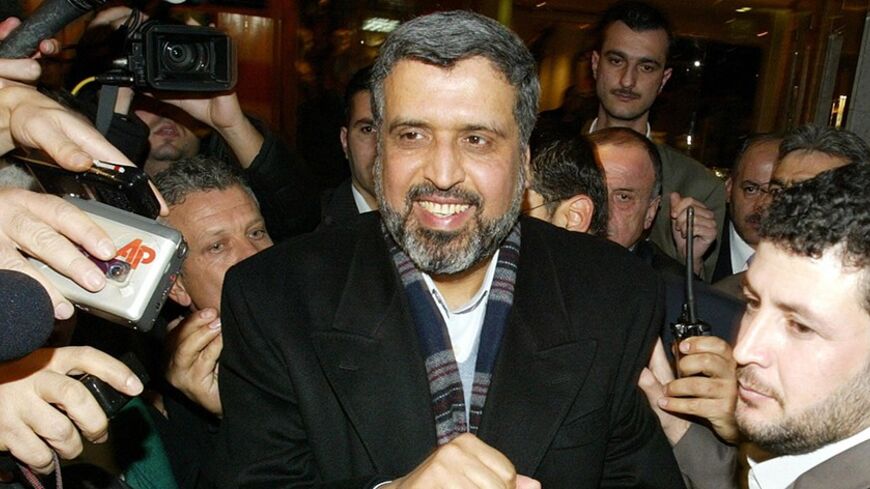 Ramadan Abdullah Shalah, Palestinian Islamic Jihad leader, is escorted by his bodyguards as he walks past journalists following a meeting in Damascus, Jan. 20, 2007. - LOUAI BESHARA/AFP/Getty Images

TEHRAN, Iran — Last week, Palestinian Islamic Jihad leader Ramadan Abdullah Shalah, a close ally of Tehran, visited the Qatari capital of Doha to meet his ally and comrade Khaled Meshaal, the leader of Hamas, according to sources close to Shalah.

It is rare that someone like Shalah visits Doha, given the tight security measures that lead his movements to be well-tracked and detailed. Hence, he went only after receiving his Iranian allies’ blessings.

In Doha, Shalah and Meshaal discussed the latter’s forthcoming trip to Tehran, a long-anticipated visit delayed by the wait for Tehran to extend an invitation. The hurdle in pinpointing a date has been attributed to setting an appointment for a meeting with Iran’s supreme leader, Ayatollah Ali Khamenei.

An Iranian official told Al-Monitor that the visit is expected to take place after the Persian New Year (Nowroz), although the exact timing is still to be confirmed. Another Iranian source explained that all the details have been sorted with Hamas since summer 2013. He added, “Up to this moment, more than eight delegations from Hamas have visited Tehran. Political, military and social delegations were welcomed and always are. The issue of Mr. Meshaal was personal and more complicated. Now it’s almost resolved.”

A senior Hamas official who met with Al-Monitor in Tehran last week confirmed that the visit is indeed on the agenda. He asserted, “Our relationship with Iran is back as it was, and maybe better. Enemies who are betting on the end of the resistance bloc should know that this bloc is getting bigger and stronger, from North Africa to Tehran.”

Osama Hamdan, Hamas’ international relations officer, explained that the “unfortunate” disagreement on Syria is on the road to being resolved and that positive options are on the table with respect to his organization's relations with Damascus. Hamdan added that ties with Hezbollah are good and that he continues to carry out his work from his office in Beirut’s southern suburbs, a Hezbollah stronghold.

Another Palestinian resistance official, who spoke with Al-Monitor on condition of anonymity, said that efforts to reorganize the region’s two blocs are taking place on both sides. “The Saudis are restructuring their post-Arab Spring alliances, reviving the 'moderate bloc' of Jordan, Morocco, Egypt, Bahrain, UAE [United Arab Emirates] and others, and the Iranians are rebuilding their 'resistance and resilience bloc' that was brought together before 2011 — Syria, Qatar, Turkey, and the resistances in Lebanon and Palestine,” he said. “The new blocs on both sides will shape the new post-Arab Spring era in the Middle East. On both sides there are [internal] differences on certain issues, but still there is one issue that brings each bloc together.”

According to this source, the Qatari emir, Tamim bin Hamad Al Thani, is at a moment of decision. He has to think of Qatar’s national security before thinking of Syria’s. The source contended, “Doha is working on getting things [back] on the old track, and they’re ending all their commitments to groups in Syria. The differences on President [Bashar al-] Assad’s future will probably be left for the Syrian people to decide.”

The latest developments in the Gulf have led many to rethink their strategies but not their tactics, he said. “The Saudis are doing what Iran couldn’t do. They continued to pressure Qatar until it’s now on very good terms with Tehran. The same applies to Turkey, which is already today a very strong ally of Iran,” he added. “Putting Palestine at the head of the list of priorities can help in bridging the gaps. That’s why today Hamas and Islamic Jihad are playing an important role in political reconciliation within the bloc — today in Tehran and tomorrow maybe in Damascus.”

Getting back to Shalah’s visit to Qatar, Al-Monitor learned that the Islamic Jihad leader met Emir Tamim and his influential adviser and former Israeli Knesset member, Azmi Bishara, who is working on launching a new media network that includes a London-based TV operation, newspaper and a Beirut-based website under the name Al-Arabi al-Jadeed (The New Arab). The network, according to sources in Doha, has a big budget and is expected to promote the new, post-Arab Spring image of Qatar. It will be different from the one that Al Jazeera once projected as being light on Islam and more liberal, with a leftist touch. The new network, expected to start gradually, is not meant to replace Al Jazeera but to present a new voice representing the emir's vision.