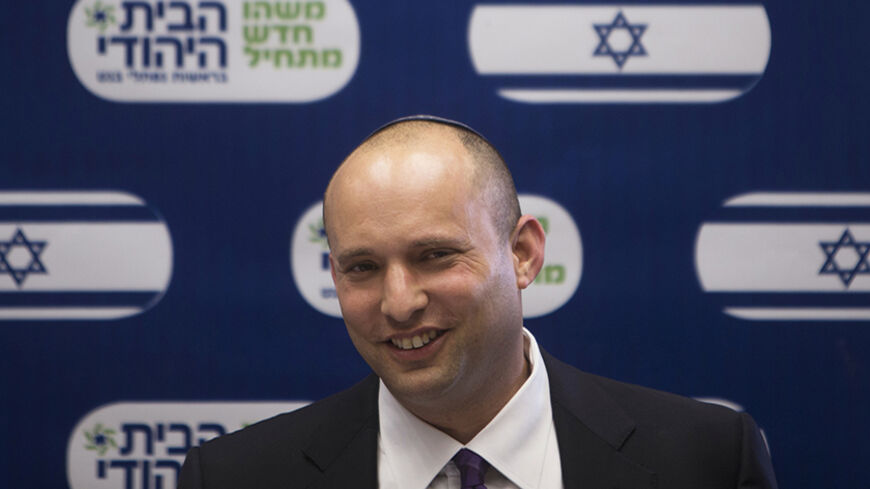 Naftali Bennett smiles during a meeting at the Knesset in Jerusalem, March 4, 2013 - REUTERS/Ronen Zvulun

Naftali Bennett made a Sept. 10 appearance on the stage of Tel Aviv University’s Smolarz Auditorium. Behind him were giant screens primarily projecting photographs of himself and video clips of his interviews with foreign media, making him appear more like a chief executive officer at the launch of his large hi-tech firm than the chairman of a national-religious right-wing party.

It was no coincidence that Israel's economy and trade minister had decided to hold HaBayit HaYehudi’s convention at Tel Aviv University, a secular, left-wing bastion. Bennett wanted to send a message: In upcoming national elections, he will be targeting the broader public. Beyond that, he wanted to create an impression of victory and of plenty, as befitting a large, strong party. Bennett therefore made sure to hire opulent, expensive catering to provide massive quantities never before seen at a political party event, and certainly not for a party like Mafdal-HaBayit HaYehudi, which until just two years ago was on the verge of disappearing from the political map.

There was no mistaking the star of the event. Bennett did not even try to create the outward appearance of a team affair. Even when Knesset members rose to speak, behind them a giant screen beamed with Bennett orating in excellent English (with Hebrew subtitles) to foreign TV stations during Operation Protective Edge and explaining why Israel had the right to strike Hamas. The unfortunate parliamentarians didn’t stand much chance getting the audience's attention. Although they stood on a stage, they looked small and far away compared to the giant, on-screen Bennett, as absurd as it sounds.

What might have appeared to the casual bystander as a display of megalomania did not make Bennett uncomfortable at all. In fact, the opposite was true. This was his intention. This was a significant show of power for him, in the party he took control of less than two years ago. At that time, the party was on the verge of extinction, and now polls were predicting 17 to 19 mandates [out of 120] for it. Bennett made sure to present this piece of information on the screen in Tel Aviv, in case someone had failed to internalize the message.

Bennett had called the convention to make major changes to the party’s constitution. In effect, the amendments transformed him into HaBayit HaYehudi’s only landlord. Efforts by Bennett's opponents — Housing Minister Uri Ariel and Knesset members Yoni Chetboun and Moti Yogev — to halt his takeover ended in bitter failure. In future elections, Bennett will be able to hand-pick one candidate of his choice in every group of five on the party's Knesset list. He will also determine who will be ministers and deputy ministers from HaBayit HaYehudi if it is part of the next government.

The Chetboun-Yogev crowd warned that Bennett would turn HaBayit HaYehudi into a one-man party. The rabbis of the religious Zionist contingent claimed that the chairman, a relative newbie, was stealing the party from them, but they didn’t stand a chance against him and the flood of mandates he promised party members. The convention gave Bennett the authority and power to take HaBayit HaYehudi wherever he chooses.

In many ways, Bennett’s political achievement is illustrious. While Foreign Minister Avigdor Liberman and Finance Minister Yair Lapid established new parties, thus ensuring their clear status and control, Bennett took over a political party with existing forces and became its sole leader within a short period of time.

The response to the question of where Bennett plans to go from here is fairly obvious. Bennett is in the midst of a campaign that he hopes will land him in a few years in the prime minister’s office. It's not for nothing that immediately after his convention victory, he wrote the following brief message on his Facebook page: “Thanks! Continuing on to leadership.”

Bennett aspires to inherit Prime Minister Benjamin Netanyahu’s mantle as leader of the right. This is the overarching goal that he brought with him when he entered politics 2½ years ago. Before then, he was a rather unknown figure to the general public. In the political realm, he was known mainly for his role as Netanyahu’s “chief of staff” when the latter served as opposition leader in 2006. Bennett also served as CEO for the Yesha Council, the umbrella organization for the settlements.

At first, Bennett considered running for the Knesset on the Likud list, figuring that a large party would be a good platform from which to eventually take control of the government. Netanyahu had taken a similar route. As a young politician, Netanyahu enjoyed the halo of someone who had served in the General Headquarters reconnaissance platoon (like Bennett) and also had an international business aura when he joined the Likud. Bennett realized very quickly, however, that after he had some run-ins with Netanyahu's wife, Sara, his former boss would do anything to prevent him from getting elected to the Knesset by way of the Likud.

Bennett, ever mindful of the larger goal, searched for an alternative to realize his grand scheme and found it in HaBayit HaYehudi. Although the party was on the verge of extinction, Bennett saw in it a kind of shelf company. Within the space of a few months, he had succeeded in being elected its head. A rich man, Bennett did not need to waste time fundraising.

Next came the brilliant campaign that fit in well with the “new politics” atmosphere in Israel and earned 12 mandates for HaBayit HaYehudi. In retrospect, Bennett’s alliance with Lapid seems much less innocent and idealistic. Instead, it now appears to have been a deliberate step toward advancing Bennett’s personal agenda. With it, he succeeded in joining the government. When this goal was accomplished, he distanced himself from Lapid. To Bennett, Lapid was only a means to an end. Operation Protective Edge also served Bennett well. He managed to be a foil to Netanyahu while maintaining a statesmanlike demeanor, as opposed to Liberman.

Bennett is aware that as the leader of a religious party with an extreme right-wing image, it will be difficult for him to head the government. Therefore, he is trying to transform HaBayit HaYehudi into an “upgraded Likud” and keep his distance from the rabbis. Bennett wants to project the image of a national right-wing party with a successful young leader, a man of the world.

Meanwhile, Bennett and Netanyahu’s relationship has begun to thaw and, according to all signs, the two will present an alliance for the next elections. This would not be a merging of the parties, but a utilitarian political alliance. For Netanyahu, it would increase his chances of forming a government, for the fourth time. True, Netanyahu's associates have described the personal chemistry between the two men as utter revulsion, at least on the part of the premier, but to obtain such an insurance policy, Netanyahu is willing to overlook that.

From Bennett’s perspective, the alliance would be an opportunity to take another step toward the broader public, as foreign or defense minister. In contrast to Liberman, who is still perceived by many as a “diasporan” Russian, Bennett is the “new Israeli.” In Bennett’s view, all he has to do is remove one hurdle — his public image as a right-wing extremist — and then, the sky’s the limit.