Hezbollah prepares to fight IS in Lebanon

The Islamic State and other extremists groups are proliferating along Lebanon's border with Syria. 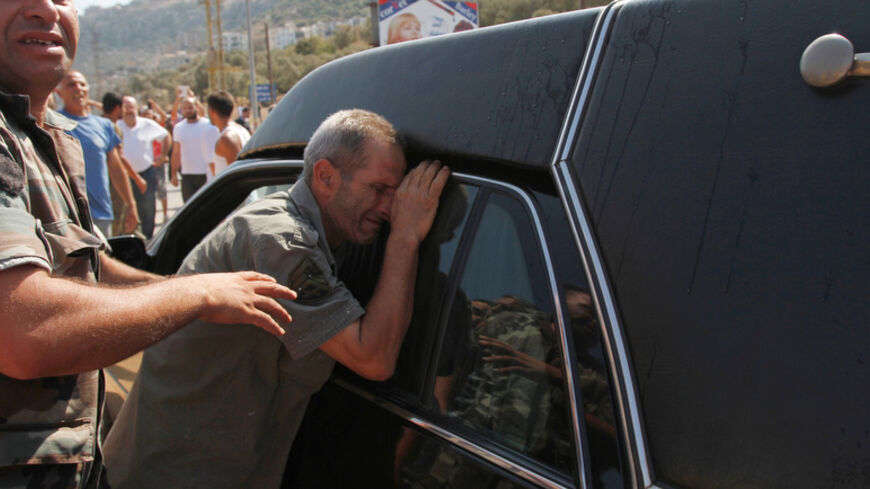 A father of a Lebanese soldier captured by hard-line Syrian Islamists reacts next to a hearse carrying the coffin of another soldier, Ali al-Sayyed, who was beheaded by Islamic State militants in Arsal, during his funeral in Qalamoun, in Akkar, Sept. 3, 2014. - REUTERS/Omar Ibrahim

Nothing in Lebanon suggests that better days are ahead. The new caliphate and caliph are both matters of confusion and concern to many. Even those who had never before thought about politics are now gravely concerned.

“It’s the era of the caliphate,” Mohammed, a barber, tells me. Mohammed has never given much consideration to politics, and, in his words, is “a man on the edge of life. All I care about is working and enjoying.” Yet, Mohammed and others like him have developed an interest in politics and security news. “I have five breaking-news applications on my phone. The Islamic State [IS] is at the borders — they have a bunch of our soldiers and already control part of Lebanon. They are a de facto power.”

Many Lebanese are still unable to differentiate between the extremist groups fighting in Syria. "They are all 'Daesh,'" says a customer at Mohammed’s barber shop, using the Arabic acronym for IS. "They slaughter people and want to make people look like them." The customer gives Mohammed a sarcastic smile, adding, "If they ruled our friend's work, they [would] want people to grow beards and hair." Everyone at the salon laughed, quite furiously.

The fact is, IS is less active on the Lebanese border than other extremist groups, even though the group is holding nine Lebanese army soldiers captive. IS has already beheaded two Lebanese soldiers: Abbas Medlej from Baalbek on Sept. 6, and Ali al-Sayyed from Akkar on Aug. 28.

A Lebanese security source told Al-Monitor, “The group on this side of the border is isolated and made up of dozens of militants who … defected from other factions and vowed allegiance to Abu Bakr al-Baghdadi after [he announced] the establishment of the caliphate. … Many of those who took part in the Qusair battle against Hezbollah [were] scattered [at the time], and have now come together under the flag of IS. Yet, they continue to be an IS franchise rather than a genuine extension of the self-styled state.”

The source, who spoke to Al-Monitor on condition of anonymity, said that being a franchise limits the possibility of the group launching a major attack on Lebanese soil for many reasons — “one is that the new strategy adopted by IS since the establishment of its state [is to spread] within territories linked geographically.” He continued, “This means areas where the entity can provide support to its attacking forces and withdrawal lines for them when they are under attack.” The source said, “The state wants to expand vertically and horizontally, and [also] within areas where it can secure a nurturing environment. In Iraq, they mainly aimed at Sunni-populated areas and a few non-Sunni areas [that were] within the wide Sunni majority. Tal Afar is a good example.”

The relationship between the IS branch on the Syrian-Lebanese border and other factions can provide insight into the group's strategy. As the mother entity fights what it describes as a doctrinal war in several parts of Syria against Jabhat al-Nusra, the same Jabhat al-Nusra coordinates attacks with IS in Qalamoun. Such coordination was evident during the Aug. 2 Arsal battle, as seen with the access some mediators had to the group with Jabhat al-Nusra’s help.

According to a source close to Hezbollah, the mentality of IS in Lebanon is more extreme than Jabhat al-Nusra, but still less extreme than its factions in Raqqa and Mosul. The source said, “Hezbollah knows well whom they are fighting and what kind of battle they are fighting. The ones in the area here, despite being an isolated group, still preserve a strength that should always be taken into consideration. They have tunnel networks that help them get arms from some areas inside Lebanon and withdraw toward safe havens on the borders when they are under pressure.”

According to the source, Hezbollah’s strategy takes into consideration the possibility that Lebanon might be under an assault by extremist groups. These groups initially look toward either vulnerable areas or Sunni-dominated areas. “Christian-majority areas are vulnerable and aren’t as fortified or defended as other cities. This gives the groups the chance to occupy such cities or towns and take inhabitants as human shields.” The source elaborated on Sunni-dominated regions, saying, “The groups might find some sympathizers within such areas. And those [sympathizers] will help them get full control and recruit new fighters who will defend their towns and cities, and help the extremists avoid the mayhem of a direct fight.”

For the above-stated reasons, Hezbollah is reviving its national arm, known as the Lebanese Resistance Brigades. The brigades were formed in March 1998 to absorb all non-Shiite Hezbollah supporters who wanted to fight Israel. Today, the brigades are taking part in the fight in Syria against extremist groups. Their role will soon be upgraded so they can cover vulnerable areas that might be of interest to Jabhat al-Nusra and IS.

Suleiman, a 27-year-old Sunni from South Lebanon, was recently trained in the brigades. He said he was ready to do whatever possible to prevent IS from entering Lebanon. “I don’t want to fight in Syria. I’m a Sunni and 'Daesh' doesn’t represent me, therefore I went to train to be able to fight them if they enter Lebanon,” he said.

Suleiman said that dozens of young men from different sectarian backgrounds were at the training camp. “The danger of 'Daesh' threatens everyone. Ali al-Sayyed [the decapitated Lebanese soldier] was a Sunni. They don’t really care who you are, they only care for those who believe in their ideas. All others are going to be killed,” he said. “I don’t want to be killed. I prefer to fight to the last bullet.”