Nusra attacks on Lebanon attempt to 'change rules of game'

Attacks by Jabhat al-Nusra on Hezbollah-controlled positions inside Lebanon represent a troubling development for the Lebanese and possibly the regime in Damascus as well. 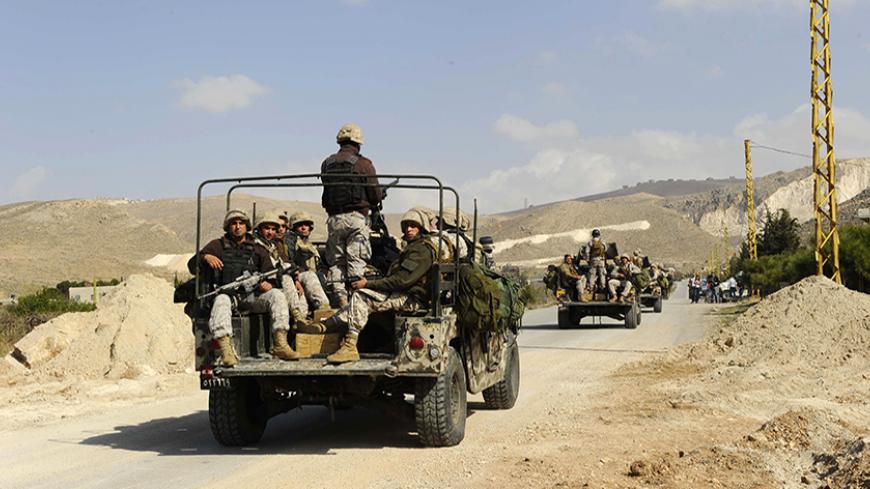 BEIRUT — The spillover from the Syrian civil war has finally entered the combat phase in Lebanon. The situation is no longer one of isolated border clashes or the Syrian crisis agitating internal strife. On Oct. 5, Jabhat al-Nusra opened a new chapter in the fight, attacking posts controlled by Hezbollah in Lebanese territory. According to media reports, at least eight Hezbollah fighters died in the battles, and Jabhat al-Nusra gained temporary control of a major post near the town of Brital, a Hezbollah stronghold in the Bekaa Valley.

Al-Monitor reported in early September on Hezbollah’s preparations to confront the Islamic State (IS) and Jabhat al-Nusra in Lebanon. That preparation is now being tested, and the resulting suffering could potentially envelope the country, which is already in the midst of a complicated crisis involving internal political differences and regional rivalries in addition to the Syrian crisis. Having survived 15 years of bloody war between 1975 and 1990, this tiny country might be heading toward an even bloodier encounter that reignites simmering sectarian tensions that have been lingering for years under the cover of local consensuses and regional agreements aimed at keeping Lebanon's fragile security under some sort of control.

“There is no chance that anyone can turn the clock back,” said an official Lebanese security source who spoke to Al-Monitor on condition of anonymity. “It’s hard to say it, but the fact is these events are far bigger than the Lebanese state’s capabilities. The army is paralyzed. Politicians are feeble. The state is anything but a state. [There has been] no president for almost five months. The Cabinet is in a state of caretaking and the parliament on an extended term. It’s a miracle life goes on.”

This was the first time this source has openly expressed his despair, but these are unpleasant facts that every Lebanese admits regardless of their differences. Yet, it's even harder to find one among them with a keenness to let go of the chronic feelings of hostility toward those on the opposing side. Hezbollah sees itself as the defender of Lebanese territory, while its political rival, the March 14 Coalition, views the Shiite organization's defensive actions as unacceptable. Clearly, there is lack of common ground, even when it comes to adopting a strategy under such dire circumstances.

A source close to Hezbollah told Al-Monitor, “The latest events are an attempt by the extremists to change the rules of the game. They are looking to transfer the battle from Syria into Lebanon.” He added, “This is additional proof that these people have a broader strategy in the region. They don’t just want to topple the Syrian government for democracy's sake, rather it’s an ideologically driven war aimed at turning the whole region into a war zone. Hezbollah isn’t going to let such an agenda past the Lebanese borders, even if it costs them hundreds of lives.”

Jabhat al-Nusra’s attack on Hezbollah's posts resembled the strategy Hezbollah used against Israel during its occupation of south Lebanon, between 1978 and 2000. It involved a number of smaller attacks on 10 positions as distractions, and a major attack on the most vulnerable post, Ais Assaa. Jabhat al-Nusra fighters eventually entered the post after killing the sentries. The assault was recorded and posted on YouTube.

According to the source close to Hezbollah, “The resistance succeeded in preventing them from occupying the post. They were in the hundreds, but at the end, they failed in securing the position. Hezbollah’s counterattack saved Lebanese citizens living nearby from the direct threat of this brutal extremist organization, which is fleeing pressure on the borders to areas inside Lebanon.”

The source indicated that one of the main reasons Hezbollah has been quiet about the extremists for more than a month is because of the Lebanese soldiers they are holding hostage. He stated, “After the abduction of the Lebanese army soldiers, Hezbollah became very cautious with these groups, and it seems they misunderstood this caution, and became delusional, thinking that Hezbollah is weak.” He said further, “Hezbollah wanted to give the Lebanese government and army the chance to do whatever was possible to end this tragedy, but the extremists took it as a chance to change the status quo. This is not acceptable at all.”

One major concern, according to the source, is that the militants will soon attempt to take control of the eastern mountain range. He said, “This might involve areas from south Lebanon on the border, in the Shebaa [Farms] and Arkoub area to the Bekaa [Valley]. They want better positions to deploy from [along the border] during the winter, so they are either attempting to recapture areas inside Syria, and this is very difficult, or reaching into Lebanon, and this is not easier, but they are betting wrong.”

Jabhat al-Nusra’s strategy might be based in part on what the source said, but there could be other reasons for the attacks. The group, which introduces itself as al-Qaeda in the Levant, might be aspiring to the ambitious goal of pushing Hezbollah back to defend Lebanese territory, in the process forcing it to leave Syria, leaving the regime in Damascus to defend itself against the existential threats along the frontlines within its borders.