Lebanon's Central Bank is encouraging commercial banks to invest in small business start-ups to spur economic growth — but with limited success so far. 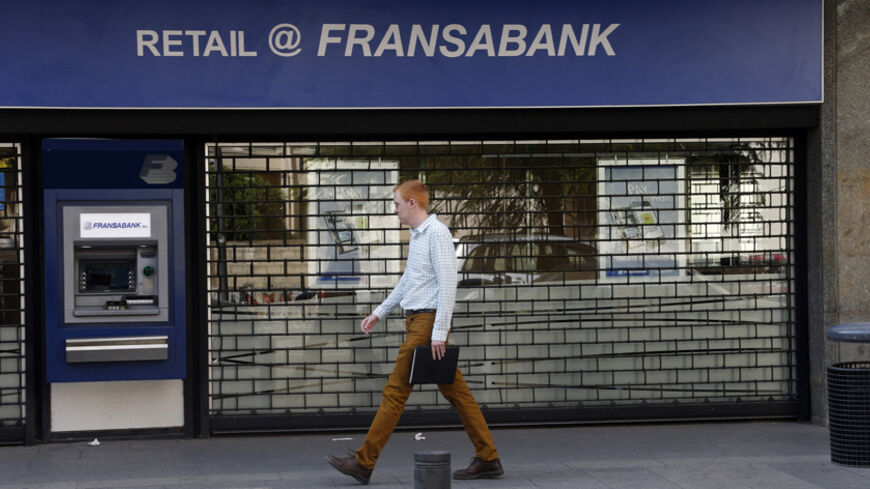 A man walks past a closed branch of Fransabank in Beirut, Sept. 4, 2013. - REUTERS/Mohamed Azakir

Circular No. 331 issued by the Central Bank of Lebanon (BDL) on Aug. 22, 2013, will not only help start-ups and boost the knowledge economy sector through financial incentives to banks, it may also turn into an incentive for developing the financial markets, consolidating the economy and boosting growth, especially if the appropriate security and political conditions are met that would come to the country’s advantage.

Circular No. 331 encourages commercial banks to invest in start-ups. The BDL will guarantee up to 75% of the value of these commercial bank investments in the capital of start-ups that meet the determined criteria.

These start-ups must be innovative Lebanese companies working in the knowledge economy sector and must contribute to creating jobs.

According to the circular, the total participation of any bank in start-ups may not exceed 3% of the bank’s capital, provided the participation of any bank in a single start-up does not exceed 10% of the aforementioned 3%. Thus, commercial banks must invest in at least 10 start-ups if they want to benefit from all the facilities provided to them by BDL. Considering that the total amount of equity of commercial banks operating in Lebanon is registered at $13.5 billion, the BDL would be placing a total of $400 million in the service of the knowledge economy, innovation and entrepreneurs through this program. At the circular’s application, the BDL will be thus urging banks to invest in this area, bearing the greater part of the burden and motivating commercial banks to diversify their investments and distribute their risks.

However, will these incentives be a sufficient motivation for Lebanese banks, many of which are traditional and conservative commercial banks, to invest in the knowledge economy and more importantly to directly contribute capital? This means that these banks will shift from a lender to a shareholder participating in the profits but also bearing risks.

Rahme said, “The main obstacle is that banks are not accustomed to this type of transaction. Banks are not yet qualified to deal with the entrepreneurs or with this kind of investment. This is different from these banks’ current activity, including investments in financial assets, particularly in Treasury bonds and the administration of loans, imposing an approach that contradicts with the principle of initiative and risk-taking.”

It is worth mentioning that banks in general, and large ones in particular, avoid small investments, given their cost and trouble make it not worth the effort. This contradicts the spirit of Circular No. 331 that aims at encouraging start-ups and the entrepreneurial spirit.

Therefore, more than one year after the issuance of the Circular, direct investments in start-ups by commercial banks is still not significant. To date, only one operation was registered when Al-Mawarid Bank invested in Presella, an online ticket and events reservation application.

Rahme said, “Other files are being studied and are awaiting approval by the BDL.” The incentives offered by the Central Bank were enough to push the banks to find appropriate means to overcome obstacles by creating specialized investment funds to seize the opportunity.

The most important of these funds were invested in Berytech 2 and Middle East Venture Partners (MEVP) of a respective value of $35 million and $50 million. Large Lebanese banks such as Banque du Liban et d'Outre-Mer (BLOM) Bank, BLC, and Fransabank are shareholders in Berytech 2 while Bank Audi is among the most prominent shareholders of MEVP, which are both investment funds.

Regarding the main difference between commercial banks and these specialized funds, Rahme said, “For these funds, investments are not optional but mandatory. Investments are the reason why they exist and to this end they are managed by competent and skilled parties. This will be an incentive for investments in the digital economy sector and will also contribute to educating banks and qualifying them for this type of business activities. He added, “It took some time for the adoption of the legal framework governing the activity of these funds since Lebanese Laws are not well suited for this.”

Does this cash injection of $400 million represent inflation, especially in light of the lack of investment opportunities in a country whose economy suffers from recession and stagnation due to the political crisis and the deteriorating security situation? A banker said, “These amounts will not be entirely invested at once, but rather in stages.” This means that the balance between offer and demand for investments would be respected. Regarding sufficient deal flow, it is worth mentioning that thanks to Circular No. 331 Entrepreneurs Boot Camps were established — these are training centers and incubators for entrepreneurs and start-ups. “Two Entrepreneurs Boot Camps were organized and work is underway for the establishment of the third” said Rahme. As for investment exit strategies, in the absence of an effective and sophisticated stock exchange, Rahme added, “We will continue working to develop financial markets. This will probably not constitute an obstacle in Lebanon, as bank deposits constitute 500% of the GNP.”

The holders of these deposits may be looking for investment opportunities whose revenues exceed the interest offered by banks and they may buy direct shares in these companies outside the stock exchange through what is called the Trade Sale.

There is no doubt that this positive development in the Lebanese financial market would not have been possible without the pioneering role of the BDL, which provided the appropriate cash instruments that enabled banks to expand their business scope and open up new horizons for entrepreneurs, innovators and investors.

However, should the Central Bank assume this role of motivating reform and promoting growth and innovation or should its mission be limited to controlling inflation and maintaining monetary stability? In a country with a sound economy, the governmental authorities would be tasked with encouraging growth, creating job opportunities and developing the economy. Yet, in Lebanon, where the government is almost absent and the presidential seat is vacant, the Central Bank would be doing the country a favor by trying to fill the void created by others.