As sanctions loom, Syria looks to retrieve funds from abroad

Damascus wants the country's banks to develop incentives to bring Syrian funds back, especially those deposited in Lebanese banks. 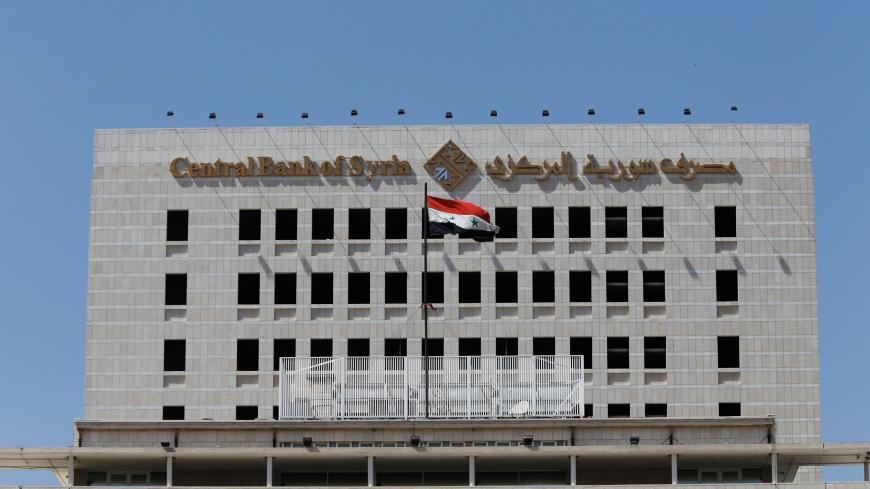 A Syrian national flag flutters on the Central Bank of Syria building in Damascus, Syria, May 31, 2016. - REUTERS/Omar Sanadiki

Syria wants its money back.

The Central Bank of Syria is redoubling efforts to bring back funds deposited in Lebanese and other foreign banks, as US financial restrictions on the Syrian regime grow tighter. The US House of Representatives passed Jan. 22 the Caesar Syria Civilian Protection Act on the Middle East for 2019, designed to impose stricter sanctions on the regime for torturing its own citizens. A similar bill is pending in the Senate.

The new sanctions would affect entities that cooperate with Syria in the fields of construction, engineering, energy and air transport, as well as those that help finance the regime.

Local media revealed that the Central Bank is considering all possible options to attract funds from Syrians abroad, accepting foreign currency deposits in dollars and euros and relying on exchange companies and local banks.

Though estimates vary, statistics released by the Banque du Liban (Bank of Lebanon) show that total deposits of nonresidents, including Syrians, in Lebanese banks amounted to $36 billion by March 2018, an increase of 2.5% from the end of 2017. The Middle East Monitor reported in July that Lebanese economic sources placed the total of Syrian funds deposited there at $15 billion to $18 billion.

Some government banks in Syria immediately responded to the Central Bank's effort to attract funds. The Real Estate Bank of Syria announced Jan. 27 it was adjusting interest rates on deposits to attract more of them, and the Commercial Bank of Syria followed suit.

At the Real Estate Bank of Syria, interest rates on deposits made in Syrian pounds reached 7% for one to three months, 7.5% for six months, and 8% for one year and more. Interest rates on foreign currency deposits are set according to the daily exchange rate, and the minimum deposit is $1,000.

About 17 exchange companies and 14 private banks based in Lebanon and Gulf countries operate in Syria, in addition to six Syrian government-owned banks, with the Commercial Bank of Syria being the largest in terms of capital and the volume of its business activity in the market.

Since the 2011 outbreak of protests in Syria, billions of dollars have been moved from Syrian banks and deposited in Lebanese and regional ones. A UN report published in November 2016 estimated $22 billion in Syrian funds are deposited abroad, mostly in Lebanon. Syria needs these funds to achieve the regime’s economic plans and financial policies, and to stabilize the exchange rate of the Syrian pound, financial experts told Al-Monitor.

A Syrian banking expert told Al-Monitor on condition of anonymity, “If the regime really wanted to encourage the return of capital to Syria, it would work on a comprehensive incentive program and address all Syrians in neighboring countries. But focusing on Lebanon only has other political motivations.”

The source said the focus on Lebanon is “mainly linked to influencing the issue of the [almost 950 thousand] Syrian refugees in Lebanon and their return.”

Total assets deposited in Lebanese commercial banks ($177.4 billion as of November 2018) are more than triple the country's GDP (which reached an all-time high of $51.84 billion for 2017). Any crisis to the banking sector would have catastrophic consequences for Lebanon, which is why that sector is a powerful tool to pressure Lebanon and its government, the expert said.

In conjunction with the Central Bank of Syria's efforts to attract funds, it announced Feb. 4 that, for the first time in Syria's history, it will issue certificates of deposit in Syrian pounds to “manage local liquidity within the framework of implementing a monetary policy, and encourage banks to attract more deposits.”

But Osama Kadi, head of the Syrian Economic Task Force, told Al-Monitor that he doubts the value of such moves. If 10 billion Syrian pounds are recovered within a year, that would only amount to $20 million, “which is not enough to cover a fraction of domestic demand or government expenditures, and will not help lower the price of the Syrian pound against the dollar."

He added, “Adopting monetary policies that help invest the accumulated cash for savers in the local market is a traditional tool in a stable environment, but issuing certificates of deposit in Syrian pounds with a nominal value of 100 million pounds per certificate and a 4.5% interest rate is practically useless. The Syrian pound is unstable and people do not trust the government’s performance. In addition, [while] according to officials inflation rates have reached 36%, they actually exceed 400%.”

As talks on the Syria reconstruction process are circulating, it may seem appropriate for the regime to restore Syrian funds in light of its deteriorating financial situation, and thus the Central Bank ought to take more actions to improve the legal system of bank deposits.

The Syrian banking expert noted, “The certificates of deposit may be motivating, but not for external funds. There are new categories of wealthy warlords who don't know what to do with their money, and they may end up being the lever for these types of certificates.”

He further questioned the regime’s ability to recover money from Lebanon or abroad in general. "The Central Bank has no power over deposits outside Syria, and this action cannot be called a recovery operation because those funds are not the regime’s property in the first place. If depositors don't take the initiative themselves [to put their cash in Syrian banks], the money will not return [to Syria].”

He noted, “The regime's aim is to exert political pressure on Lebanon on several issues and put it in an embarrassing position internationally. When the regime said Syrians had a large volume of deposits in Lebanon, it aroused the curiosity of the US Office of Foreign Assets Control [OFAC], which immediately investigated this matter.”

OFAC has issued many economic sanctions on Syrian banks, freezing assets abroad, banning travel, and prohibiting deals with a number of Syrian businesses and businessmen.

According to the expert, “It's impossible to predict what OFAC will do, but anything is possible. It could continue to monitor the financial channels of Iran, Hezbollah and the Syrian regime, and this wouldn't exempt Lebanese banks from sanctions, as many of them have partnerships with banks in Syria.”

He noted, “One can't separate economic sanctions from politics. They have become tools of European and American foreign policies. OFAC follows up closely the movement of funds transferred from Iran to Hezbollah or from any other country. It is primarily concerned with knowing who Hezbollah’s financiers are.”

Speaking about the possibility of employing recovered money for reconstruction, the expert said, “These funds won't contribute to this process. All they can do is increase the liquidity of foreign exchanges in banks operating in Syria.”

A large part of Syrian deposits are found in the Gulf countries, Jordan and Egypt, but not in Turkey, given Damascus' deteriorating political relations with Ankara.

The source added, “I think Syrian deposits aren't found in Turkey because there have been no banking relations between Turkey and Syrians since before the war, except for a few businessmen. But Syrians from Damascus and Aleppo, whether they were individuals or traders, have had relations with banks in the Gulf and Egypt for a long time. Some Gulf banks in the [United Arab Emirates], Qatar and Kuwait even have large shares in private Syrian banks from before and even during the war. This is why returning Syrian capital from these banks is also a possibility.”