Iraq's prime minister has proposed the formation of a National Guard that would unify the ranks of Sunni, Shiite and Kurdish forces. 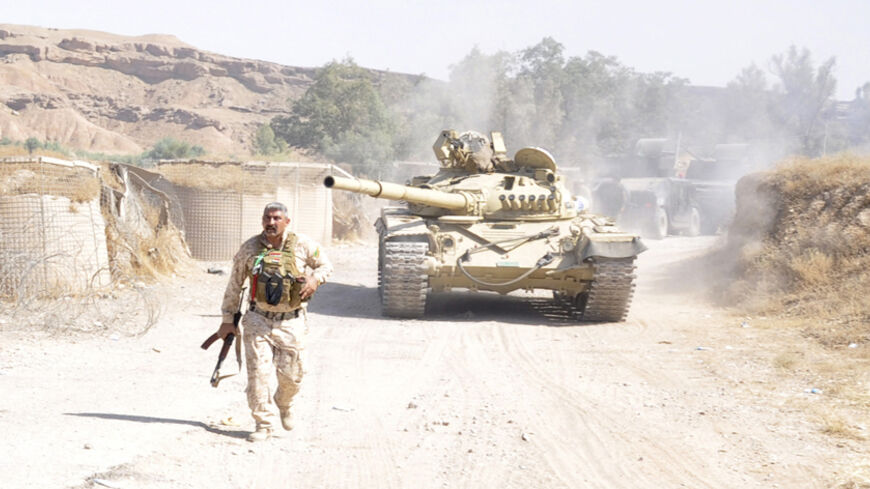 A tank is pictured as Iraqi security forces patrol after clashes with militants of the Islamic State in Diyala province, July 16, 2014. - REUTERS

The dispute regarding the formation of an Iraqi National Guard is ongoing among the country's political actors. The guard is supposed to incorporate Shiite and Sunni militias, as well as local armed forces, under an official umbrella that would work alongside the Iraqi army across the entire country.

Iraqi Prime Minister Haider al-Abadi included the issue of the National Guard in his plan of action, on which the parliament recently voted. He said the plan "is based on ensuring stability and security, supporting the security forces and the national reconciliation project, developing the popular mobilization experience, establishing a provincial national guard, [as well as] supporting the peshmerga.”

Although it's unclear how the National Guard will be formed, in principle, the guard will take on the character of a local public force and attempt to resolve the clashes taking place between the army and the security forces, as well as between local inhabitants. These clashes continue to stir tensions in Sunni regions.

This idea was first proposed when the Islamic State (IS) invaded Mosul and other cities.

Kamel Muhammadi, a leader of a tribe in Anbar, told Al-Monitor, “The idea was discussed earlier as a solution for the practices of the governmental forces against the [region's] inhabitants. It focuses on forming a local force, like the Kurdish peshmerga, in each province to protect it locally and avoid the intervention of foreign forces.” Muhammadi said the project would also include the Sunni armed groups and tribes.

Ali al-Hatem, a prominent leader who spearheaded early Sunni protests, said, "The idea first came about as a compromise solution, compared with their previous demands to establish regions to alleviate pressure [on Sunni cities] that [stem from] the government, the security and military forces, and the militias."

“The establishment of Sunni regions was going to be accompanied by the formation of a local military force for protection. Everybody realizes that expelling IS and other extremist groups would not happen, except through the Sunni regions, which are the only ones capable of achieving this goal,” he said.

The National Guard seems to be a compromise aimed at precluding a Sunni declaration of independent regions. But, it is still not finalized. “We are still holding on to our demand for [the establishment of Sunni] regions, but we are looking positively at the new government’s steps, and we will be watching closely its fulfillment of demands,” Hatem said.

The fact of the matter is that Sunni, Shiite and Kurdish negotiators were confronted with another reality. On the military level — especially in the Shiite regions — militias are very powerful and fight IS under the banner of popular polarization in the wake of the devastation of the Iraqi army.

A prominent Shiite source told Al-Monitor, “Containing the [Sunni] militias by confronting them or trying to disband them with the power of the state was not an option after they surfaced with full power and huge capacities. The Shiites agreed internally to include the militias in the National Guard, which would turn them into regime forces fighting in tandem with the Iraqi army and security forces.”

So far, the war on IS, even the one being waged internationally, seems more defined than before, as local Sunni forces help the Kurdish peshmerga and the Iraqi army liberate regions under IS control. The international alliance will back these local forces with air support and also provide military experts and consultants to lead plans on the ground.

After the end of the battles, local forces should take control of the situation in the liberated cities. The Iraqi government should reformulate how it deals with the provinces of Anbar, Mosul, Salahuddin and Diyala to put an end to present tensions. Shiite militias should adopt defensive positions in their current locations without advancing toward Sunni regions.

Nevertheless, this vision of a future National Guard does not seem completely consensual. Nouri al-Maliki, Iraq's former prime minister and current vice president, strongly rejects this vision, viewing it as a prelude to dividing Iraq.

“Local calls to establish an army in Anbar, Mosul, Salahuddin and Diyala represent a dangerous idea and serve as a prelude to the country’s division,” Maliki said during a Sept. 14 press conference in Karbala. “All formations in line with popular mobilization ought to serve as a military branch affiliated with the central government, entrusted with national tasks and not limited to [serving] a certain province only.”

Ammar al-Hakim's al-Muwatin Alliance and Muqtada al-Sadr's al-Ahrar Bloc responded to Maliki’s statements on the same day. They said the National Guard proposal is currently under legislative review since the Iraqi parliament voted on the idea.

The threats raised by Maliki are plausible. However, his alternate solution — one of “popular mobilization” that barely differs from a National Guard — is no less dangerous, with one exception: It would allow Sunni and Shiite fighters to fight on common battlefields.

Iraq has many Sunni and Shiite militias that also suffer from internal disputes within their own ranks. Nothing guarantees that similar conflicts will not break out in the future.

Furthermore, the Kurds have rejected the inclusion of the peshmerga under the banner of the National Guard, considering that the peshmerga forces are officially defined as the "Guards of the Region."

Kurdish officials said that "peshmerga forces will not become part of the National Guard," considering that the forces are unique to the Kurdistan Region, which, just like any other independent region, needs such a force guarding its territory.

Until the concept of National Guard is included within the framework of clear legislation, one cannot speak of the process by which all these forces will be regulated. It still remains unclear whether these forces are ready to give up their religious, intellectual and sectarian affiliations in favor of joining an official force.