Is the new National Guard the key to unifying Iraq?

Proponents of an Iraqi National Guard envision it serving as a counterterrorism force, bringing militias under state control and helping rid the country of the Islamic State. 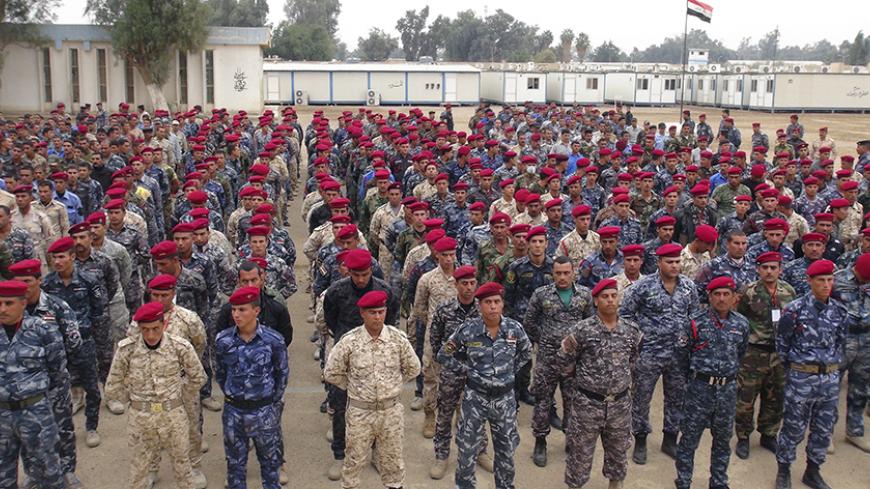 Sunni tribal fighters take part in a military training to fight against militants of the Islamic State, on the outskirts of Ramadi, west of Baghdad, Nov. 16, 2014. - REUTERS/Ali al-Mashhadani

A wide range of armed forces beholden to different authorities outside the defense and interior ministries are spread across Iraq. This reality was not spawned by the occupation of Mosul by the Islamic State (IS) in 2014, but by the chaos and intersection of various agendas and interests. The current discussion surrounding the formation of a National Guard is an acknowledgment of this reality and an attempt to create a legal framework to control the situation.

Unofficial armed forces have always been a formidable presence in Iraq alongside official forces, even under Saddam Hussein, whose son Uday announced the formation of a force called the Fedayeen Saddam in November 1994. At the same time, the Baath Party had an armed presence that was more influential than the police and also directly linked to Uday. It enjoyed more power than the other security apparatuses.

After 2003, the situation became more complicated, as armed forces proliferated either under the banner of “resistance to occupation” or to protect communities. The Iraqi arena experienced a race to fill the void left by the absence of the Iraqi army on the one hand and to defend the interests of conflicting political and economic parties on the other.

In 2003, Paul Bremer, leader of the US occupation authority in Iraq, decided to dismantle the army and replace it with a new armed force that would also incorporate the militias that had fought Hussein's regime. The move was disastrous on several levels, in particular in leading to the creation of power centers within the new army that were loyal to political leaders rather than to the military establishment. Many Sunni leaders roundly criticized the decision.

Bremer’s maneuvering was an attempt to cope with the fait accompli of the collapse of the army and subsequently to contain militias and other armed factions taking control of security in the resulting vacuum. The reality that prevailed in 2003 again unfolded in 2014, with the collapse of the reconstituted Iraqi army and the emergence of irregular armed forces to fight IS.

The difference between the two experiences is that Bremer had wanted to fully integrate the militias into the national army, while in 2015, the Iraqi government is hoping to build a new military force, the National Guard, independent of the army. This developing force would likely gather the armed Shiite factions under legal cover along with Sunni groups and tribal fighters being trained, with US assistance, to form a force capable of entering areas occupied by IS.

Details about the National Guard — which Iraqi Prime Minister Haider al-Abadi acknowledges as providing legal “cover” to assemble armed factions and tribes — are still being discussed in political corridors prior to the passage of legislation on its creation, but Oil Minister Adel Abdul-Mahdi has posted some general points about the draft law on his Facebook page.

Abdul-Mahdi wrote, “Members of the National Guard are of two types: the permanent section, namely, the professional apparatus, which will be key to this institution and will have the same responsibilities and rights of the army. The other section is temporary, and it will be mobilized whenever the need arises. This section is allocated to serve for a certain period of time and then return to its regular duties. This section will be asked to serve for a month every year to be trained, fit and ready.”

He also stated, “The idea is for the National Guard to be situated in each province, but it can be summoned when needed in other provinces for antiterrorism purposes, in periods of war, emergencies or natural disasters.” Abdul-Mahdi further observed, “It will definitely be possible to organize the Popular Mobilization forces, the Sons of Iraq and the peshmerga under the umbrella of the National Guard, knowing that the main goal of the latter is to prevent the emergence of militias, put all the weapons under the supervision of the state and provide backup forces when needed. This could limit the phenomenon of militias. The National Guard draft law, if approved, will be the alternative to the conscription system that prevailed in Iraq before 2003. In other words, there will be permanent forces with a high level of professionalism as well as backup forces, all under the umbrella of the National Guard.”

There are, of course, reservations about the National Guard concept. Chief among them are those expressed by Shiite factions mobilized under the Popular Mobilization forces. One perception is that the National Guard is an American idea and is aimed at dividing Iraq. Those holding this opinion see the concept as another Awakening project. Some Kurds have expressed opposition to the peshmerga’s involvement, asserting that the force's sole duty is to defend the Kurdistan region. Sunnis appear to be the most enthusiastic about the formation of the new outfit, viewing its creati​on as part of an obligation the government has committed itself to and from which it cannot backtrack.

Abadi media spokesman Rafed Jabouri told Al-Monitor that Abadi has committed his government to the National Guard law, saying, “Many statements have been made because it is an open Iraqi issue, but these statements do not necessarily reflect the views of the political blocs. The National Guard is a commitment presented in the government formation charter, which was approved by the parliament. The draft law was put forward a few days ago at the National Security Ministerial Council, which is a mini-government. It was discussed and amended, and it will soon be submitted to the Council of Ministers.”

Jabouri also stated, “[Abadi] handed copies of the draft to the political blocs, and the reactions have been positive.” He said that the concerns about the law are “based on its content, not on the number of members that will join this force, and some parties have conceptions that do not even exist in the copy of the law under discussion.”

Based on the behind-the-scenes political discussions taking place in Iraq, the National Guard project appears to have gone beyond politics and turned into part of the long-sought solution for Iraq. The new mechanism consists of two main targets. First, IS' control of Iraqi territory requires the mobilization of residents in Sunni areas within the scope of an official force capable of liberating and controlling the area and imposing security. Second, to avoid repeating the scenarios that led to the fall of the Sunni areas to IS, long-term solutions are required to provide Sunnis greater freedom in the management and protection of their cities in the long term.