Iran has mixed feelings about cooperating with US against IS

Iran wants to eliminate the Islamic State, but worries that working in conjunction with the US to do so could endanger Iran's ally, Syrian President Bashar al-Assad. 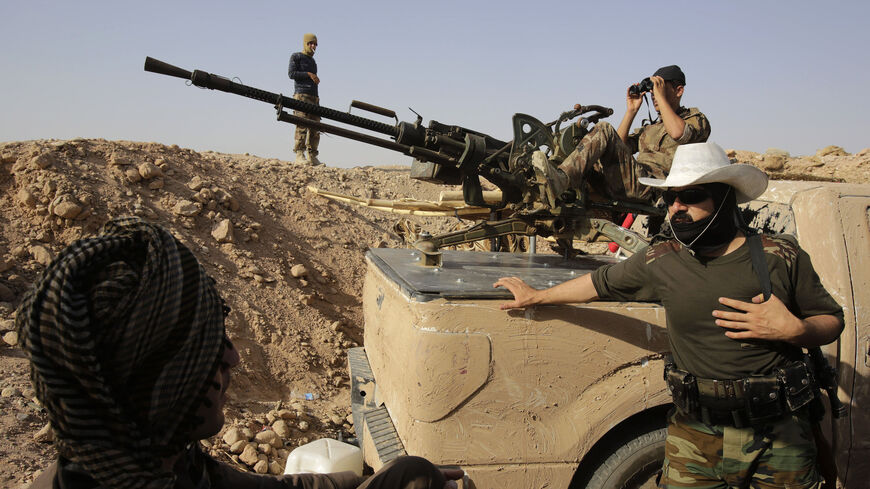 Kurdish peshmerga fighters guard their position on the Jalawla front line near the city of Khanaqin, Iraq, not far from the Iranian border, Aug. 29, 2014. - REUTERS/Youssef Boudlal

It is a moment of truth for Tehran. There is no more time for buying time, nor much opportunity for changing the situation on the ground. The United States is leading a war on the Islamic State (IS) in Iraq and Syria, a war Iran has been fighting along with its allies in both countries for years now. Here enemies of enemies aren’t friends, nor are friends of enemies, enemies. It is a complex situation where Tehran and the United States find themselves side by side shooting at the same target, but still not allies.

Iranian Deputy Foreign Minister Hossein-Amir Abdollahian told Al-Monitor that his country was the first to help Iraq in its war on terror. He added, “What we care about is fighting the real war on terror in the region and around the world; we will continue to help Syria and Iraq in their war, and we aren’t interested in taking part in any show-off conferences that claim to combat terrorism.”

Another senior Iranian official who spoke to Al-Monitor on condition of anonymity said, “The US is still coming up with a strategy for fighting [IS], and up to this moment still isn't sure whether it needs to have troops on the ground or not.” He added, “They [US officials] want to build an Iraqi army, train Syrian fighters and decide on whether they are going to strike inside Syria or not; meanwhile, Iran is fighting the war helping its allies, clear on the general strategy, and we know we’ll win in the end.”

According to the official who spoke to Al-Monitor on the phone, Iran sees IS as being a catastrophic danger to the region. “Every day this extremist group is getting stronger. Following the American lead could mean that when the US is ready to start the fight, [IS] could have enough power to impose conditions on its foes; then it might negotiate and get what it wants.” The official added, “Iran doesn’t trust the US, this is something the leader said before, and today all our commanders agree on: The US can’t be an ally of Iran, and Iran can’t fight under the command of the US — we will continue to fight our war our way.”

As drums of war continue to beat, Iran is getting more concerned about the situation in both Iraq and Syria. Iran’s problem isn’t related to how and where to fight IS, but rather over the conflict between its national security and its regional security. IS has had a base in Iraq — Jalawla — as close as 38 kilometers (23.6 miles) from the Iranian border, and Iran wants to get rid of the self-styled IS at any price. It doesn’t matter if this happens with the help of the Iraqi army, the Shiite militias, Lebanese Hezbollah, the Kurdish peshmerga or the United States, as long as there are results on the ground. A good example is the breaking of the siege around the town of Amirli in northeast Iraq. The operation was the result of US-Iranian indirect cooperation that ended with an obvious success. On the ground, pro-Iranian Shiite militias along with the Iraqi army advanced while US fighter jets bombed the IS posts. Here our source rejects the idea that there was Iranian-US cooperation, directly or indirectly. “The Americans helped the Iraqis gain control over the town; we helped also where possible with arms and advice, but this doesn’t mean we are fighting together — that’s a different issue entirely.”

As much as there are voices in Washington calling for Iranian engagement in the war on IS and as much as hard-liners in Tehran are pressuring President Hassan Rouhani’s administration to continue the war alone, it's impossible to convince a Basij militia member raised all these years on slogans such as “Death to America!” and “Down with America!” that today it’s time to fight alongside each other. Moreover, Supreme Leader Ayatollah Ali Khamenei said on June 22 that he strongly opposes any US intervention in Iraq. In that case, it’s not all about Iraq — the main issue is Syria. This is a juncture where regional and national Iranian security are in conflict. In Iraq, IS should fall at any price, while in Syria the price should take into consideration keeping Iran's ally, President Bashar al-Assad, in power.

On Sept. 13, Iranian Majles Speaker Ali Larijani accused the US-led international coalition that aims to battle the IS militants of lacking the wisdom to resolve problems in the Middle East. He added, “The US forms coalitions when it sees it cannot achieve its objectives through the United Nations and the Security Council; just as it formed a coalition against Iran, it now seeks to shape a similar one against Syria.” This is Tehran's main fear: the United States and its allies taking up the war against IS as a pretext to facilitate regime change in Syria. There was a clear statement by the Saudis vowing to help train Syrian opposition fighters who are to take part in the war on IS; they obviously plan to use their expertise and weapons against Assad later. Beside, there are no guarantees the United States isn’t going to strike some regime posts, giving the US-backed militants on the ground an upper hand in the mother of all battles in Syria, the battle for the fall of the regime.

Still, what cools down these Iranian worries is that Iraq continues to be Washington’s main concern. To defuse this threat, it wouldn’t be surprising to see the Syrian army march toward Raqqa and IS-controlled areas in Syria; such an operation might change a lot if destined for success.