Both Israel and Hamas claim victory

Both sides, Israel and Hamas, will have to compromise as the Gaza campaign will be declared a draw. 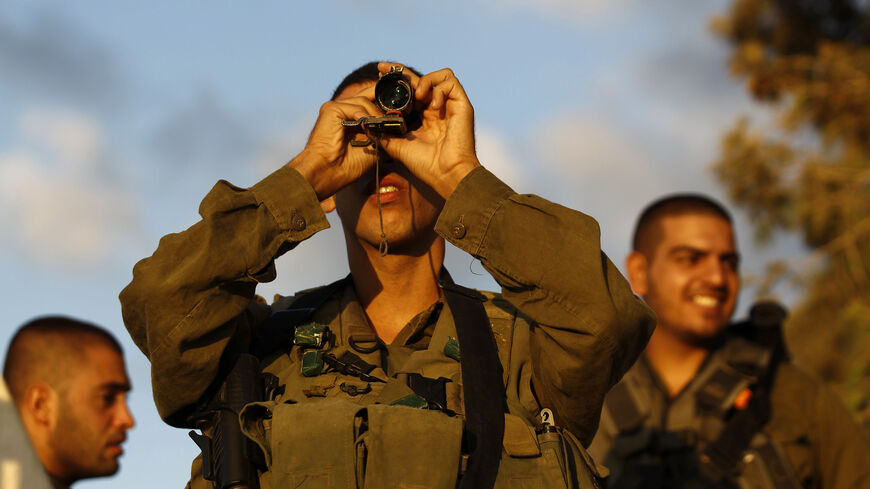 An Israeli soldier looks at the Gaza Strip through a monocular on the Israeli border, Aug. 9, 2014. Israel launched more than 30 air attacks in Gaza on Saturday, killing five Palestinians, and militants fired rockets at Israel; rocket fire and airstrikes persisted Sunday amid talks for another 72-hour cease-fire. - REUTERS/Amir Cohen

After 29 days of fighting during Operation Protective Edge, both sides — Israel and Hamas — declared victory.

Hamas boasted the victory of the "resistance" — muqawwamah. The first to congratulate the organization was senior Hamas official Ismail Haniyeh, who on Aug. 5 released a recorded message but has yet to be seen in public. Other Hamas spokespersons — Khalil al-Hayya, whose son was killed during the operation and who has just left the bunker, and Sami Abu Zuhri who, throughout the fighting, gave interviews to the media from a compound at Al-Shifa Hospital — claimed that Israel was defeated by the resistance. Once again, they claimed, the resistance succeeded in defending the Palestinian people.

But at the end of the 72-hour lull and well before the dust settled, Hamas turned the chief of staff's statement into a major embarrassment. Not only did the slogan "quiet will be met by quiet," which Israel coined at the beginning of the operation, become an object of ridicule, but it was also interpreted by Hamas as a sign of weakness.

On Aug. 8, at precisely 8 a.m., when the 72-hour truce expired, Hamas resumed its fire (although it was claimed that other organizations in Gaza were responsible for the rocket fire). This not only proved that the rocket-launching capability remained intact, but it also primarily demonstrated that the motivation to strike at Israel remained unwavering. In other words, the balance of deterrence vis-a-vis Israel does not exist, at least not the way Israel had hoped to see after a monthlong difficult military campaign in the Gaza Strip.

In fact, the arm wrestling in Cairo between Hamas, Israel and Egypt over the terms of the cease-fire, including the easing of the blockade on Gaza, will truly determine who has the upper hand.

Will the Israeli government be able to convince its public that Hamas will be deterred from attacking next time? Will Hamas celebrate the victory of the muqawwamah in Gaza after having been able to lift the strangling blockade that has lasted for nearly eight years?

It is more than reasonable to assume that both sides — Israel and Hamas — will have to compromise and that the campaign will be declared a draw. However, such a draw could be considered a victory in terms of public opinion for Hamas, which this time compelled Israel by force to come to the negotiation table and agree to some, even if not to all, of its terms.

One thing is clear, however: Once again, Hamas has been able to put the blockade of Gaza on the world's agenda. As unrealistic and outlandish as they seem at present, the demands for a seaport and an airport in Gaza will continue to be part and parcel of the international dialogue in the coming years until they probably become a reality.

There's no question that after a monthlong military campaign it can be said that both Israel and Hamas were very much taken by surprise with the other side's capabilities, plans and intentions.

Israel launched Operation Protective Edge as a continuation of Operation Brother's Keeper following the abduction and murder of three religious high-school teenagers. Israel's erroneous premise was that Hamas — being locked in between Israel and Egypt — was in distress, thus lacking the desire to engage Israel in an all-out confrontation. The statement of "quiet will be met by quiet" is the symptom of this misguided premise, which proved detrimental to Israel. Instead of being proactive and realizing who the Israel Defense Forces (IDF) was confronting in the third armed conflict in Gaza, Israel was reactive and surprised time and again by Hamas' tenacious resilience.

Those wrong assessments rendered this operation longer and more complicated from Israel's standpoint, resulting in the meager achievements at its conclusion (assuming that it is about to conclude) as well as in major embarrassment for the chief of staff, who jumped the gun.

At no stage during the fighting was Israel able to surprise Hamas, thus failing to enjoy the fruits of the element of surprise, which in any campaign provides an operational edge that helps to shorten it. This was the case during Operation Cast Lead in 2008-09 when the IDF struck 120 Hamas objectives in a surprise attack, including the police academy in Gaza. Operation Pillar of Defense in 2012 also started with a surprise attack when the head of the military wing, Ahmed Jabari, was assassinated. That assassination at the start of the operation left a large operational vacuum within Hamas ranks that impacted the entire course of the fighting.

Had Israel correctly assessed Hamas' capabilities and intentions, the operation would have presumably been conducted differently. Israel, for example, did not have Hamas leaders in its cross hairs. Rather, it singled out targets only when they were embarrassingly revealed to it, such as the tunnels. But the tunnels are just a means used by Hamas to strike at Israel.

At the end of 29 days of fighting and in the wake of scathing international criticism over the death of many civilians in Gaza, Israel is left without sufficient international credit to broaden the campaign and mainly put new targets in its cross hairs. By contrast, Hamas still fires, strikes and makes threats. Finding itself with its hands tied behind its back, Israel is quite nonplussed, wondering how to get out of the sticky situation called Gaza.

The IDF appears to have been ill-prepared for this current round in Gaza. As I noted in a previous article, Israel had its eyes focused on the distant Tehran rather than on the strengthening neighbor close to its near border — to wit, the Gaza Strip.

However, make no mistake about the military blow to Hamas, nor underestimate it. While its leaders emerged unscathed and the military wing is trying hard to prove that it still has active tunnels and rocket-launching capabilities, the organization — even if it is able to secure some diplomatic achievements at the end of the diplomatic campaign in Cairo — is still not out of the woods.

Once the battles subside, its leaders will have to explain to the residents of the Gaza Strip why their achievements — to the extent there are any (and presumably this would not put a final end to the blockade) — justified the huge number of casualties and the immense devastation in Gaza.

Once the cease-fire is in place, will Hamas be able to run the Gaza Strip responsibly, ensuring its residents a reasonable quality of life? In the heat of the battle, it seems that the most important fact escapes many, namely that Hamas seized the Gaza Strip in a military coup after violently ousting the forces of Palestinian Authority President Mahmoud Abbas. Hamas promised its residents "change and reform," but brought them nothing but suffering and misery through its militant policy.

Undoubtedly, Hamas will take flak from the residents of the Gaza Strip, which will be the thrust of the deterrence against it.

At the end of Operation Protective Edge, both Hamas and Israel will have to realign. Israel will have to ask itself how it was possible for an organization whose military power is far smaller than Israel's large and sophisticated military, to surprise, initiate and disrupt the daily routine of its citizens. Hamas, on the other hand, will have to think hard about whether to again stockpile Gaza's resources and assets ahead of another military confrontation with Israel.

At this stage, when many of the residents of the Gaza Strip are homeless refugees and almost every home has seen at least one fatality in the armed conflicts with Israel, Hamas leaders would be well advised to ask themselves whether this is how they saw Gaza in the idyllic vision they promised its residents when it was elected to replace the corrupt Fatah rule.