Hamas rose to power through those in Gaza who wished to better their dire situation, but the movement chose to invest its resources in attacking Israel, ignoring the devastating consequences of its choice on the population. 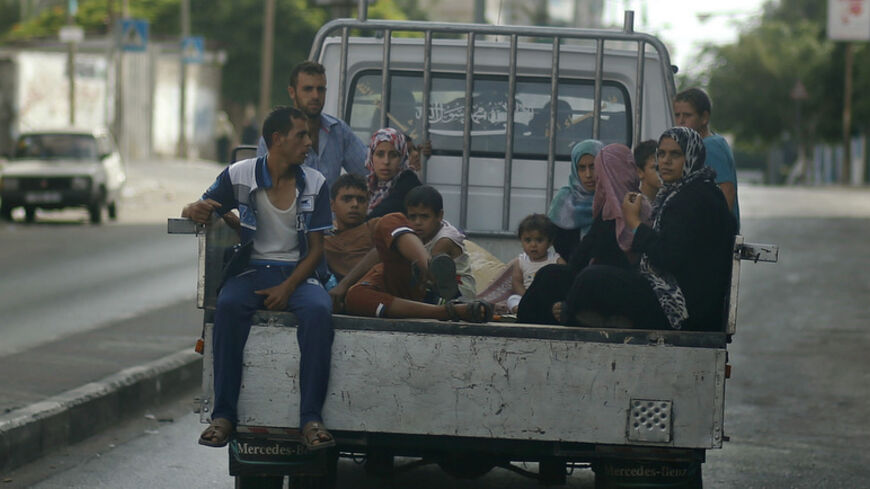 Palestinians, who fled their homes that are adjacent to the border with Israel, ride in a truck as they make their way to stay in a United Nations-run school in Gaza City, July 13, 2014. - REUTERS/Mohammed Salem

More than 160 Palestinian fatalities have been counted in the first six days of Israel's Operation Protective Edge in the Gaza Strip. According to the Palestinian Gaza-based Ministry of Health, more than two-thirds of the fatalities are civilians, and more than 22 of them are children. The devastation in Gaza is enormous and the Israel Defense Forces (IDF) estimate that they still have a long way to go and that the operation will last for many days to come.

To date, the Israeli air force attacked over 1,300 targets, including Hamas institutions, mosques, the residences of the organization's militants and, of course, rocket-launching sites. The initial Israeli proposal — namely, "quiet will be met by quiet" — was answered with a salvo of rockets on Tel Aviv. The movement's leaders went underground into fortified bunkers built to protect their lives, while leaving some 1.5 million residents in the Gaza Strip exposed to Israeli air force airstrikes.

During 5½ years, Gaza has seen three large Israeli military operations that have claimed the lives of some 2,000 people. Thousands were wounded or lost their homes. The devastation to infrastructure in the Gaza Strip was staggering. It took them more than two years to rebuild Gaza after the havoc wreaked during Operation Cast Lead in 2008-2009. The same was true during Operation Pillar of Defense in 2012.

In conversations I held with acquaintances of mine in the Gaza Strip during this current operation, they described much bigger devastation compared with previous confrontations. Moreover, following the nonstop rocket barrages, as well as Hamas' rejection of every attempt to broker a cease-fire, the Israel Defense Forces (IDF) has warned that this is only the beginning. The next stage of Operation Protective Edge is to call on the residents of the northern Gaza Strip to evacuate their homes, at which point tons of explosives will be dropped from the air to destroy Hamas' booby-trapped tunnels and long-range rocket launchers.

In a background briefing for reporters this week, an Israeli military official said that when Hamas leaders rear their heads from the bunkers where they are hiding, they will not believe their eyes. According to him, they will see a Gaza in ruins, and that the residents, who became hostage of their vanity, will be battered.

Using the slogan of "change and reform," Hamas rose to power following the democratic elections in 2006. The residents of the West Bank and Gaza voted for the organization mainly because they wanted to punish Fatah for the corruption prevalent in the Palestinian Authority from its inception. Instead of rehabilitating the densely populated refugee camps in the Gaza Strip, building schools and hospitals and providing work for the unemployed, Fatah leaders — mainly those who arrived with late PLO leader Yasser Arafat from Tunis — stole much of the money. With other financial resources, donated by various countries, Arafat set up a bloated system of security forces. Battered and bruised, Gaza was left in abject poverty. Thus, it did not take much to fall for Hamas' promises.

Yet, not only has "change and reform" remained an empty slogan, but Gaza has regressed light years, and the situation of its residents has only worsened. Not having built as much as a single school or a single hospital for the poor residents of the Gaza Strip, Hamas has shown no concern for the residents of the refugee camps from which it rose.

By and large, the money was invested in building up the movement's power, manufacturing and importing rockets and constructing an elaborate system of underground tunnels. Concrete and iron were poured under the shanty homes of the Jabaliya refugee camp, Beit Hanoun and Beit Lahia to conceal long-range rocket launchers and build fortifications to protect the organization's senior leaders. The houses of the residents remained dilapidated, derelict and exposed. This is the tragedy of Gaza, whose residents feel cheated and betrayed. First, they fell victim to the Arafat government's corruption; now, they have fallen victim to Hamas' ideology.

Established in the late 1970s on the foundations of Sheikh Ahmed Yassin's Islamic Center, Hamas initially looked after the well-being of the residents of the refugee camps, as well as Gaza's indigents. The movement's charity institutions — the Dawah — handed out pocket money to the needy and distributed food to the hungry. It built community centers for senior citizens, kindergartens and day care centers for small infants, as well as recreation centers for young adults. The Dawah was the apple of Yassin's eye, and ensuring the well-being of the residents was of overriding importance. Since then, the monster has turned against its own maker. Hamas' military wing, which was established during the first intifada, took control of the organization, leading it down its path. Armed Hamas militants struck fear in the organization's leaders — the members of the political wing. And now, more than ever before, they are taking the residents of the Gaza Strip down a path of destruction and doom.

Israel has clear goals in this current operation: stopping the rocket fire at its southern communities and removing the constant threat to its citizens. What are Hamas' objectives? What is Hamas wishing for when this campaign is over? How can you account for the conduct of the movement's leaders who, with eyes wide open, are inching toward a large-scale military confrontation with Israel, when all the residents of the Gaza Strip know full well who has the upper military hand?

The leaders of the political wing — Prime Minister Ismail Haniyeh, political bureau chief Khaled Meshaal and senior official Mahmoud al-Zahar, as well as the members of the military wing, chiefly Marwan Issa, who succeeded Ahmed Jabari, who was killed by the IDF at the start of Operation Pillar of Defense — are not deluding themselves into thinking that they are a match for Israel's military. Some 40,000 fully geared reservists, who have the most advanced weapons and military materiel, are waiting outside the Gaza Strip as Israeli warplanes buzz overhead. If that's the case, how can you account for Hamas' provocation of Israel and the ongoing fire that appears to be beckoning Israel to engage in a ground operation in the Gaza Strip? How is it that a movement that rose from amid the refugee camps to care for the welfare of the needy residents has changed its spots and is willing to sacrifice many of its followers for its radical objectives?

The only explanation is that Hamas would rather commit suicide than be humiliated by its opponents as an organization that promised the moon and the earth to its voters but has delivered neither. The organization prefers to be regarded as a martyr than being one that tried to run a civilian rule and failed miserably. Furthermore, it seems that even the residents of Gaza have no logical and cogent answers to these questions.