The Gaza incursion provoked a wave of anti-Semitism in Europe and a surge in the number of Jews emigrating to Israel, but in Israel, the war has provoked some to consider emigration to safer, less polarized countries. 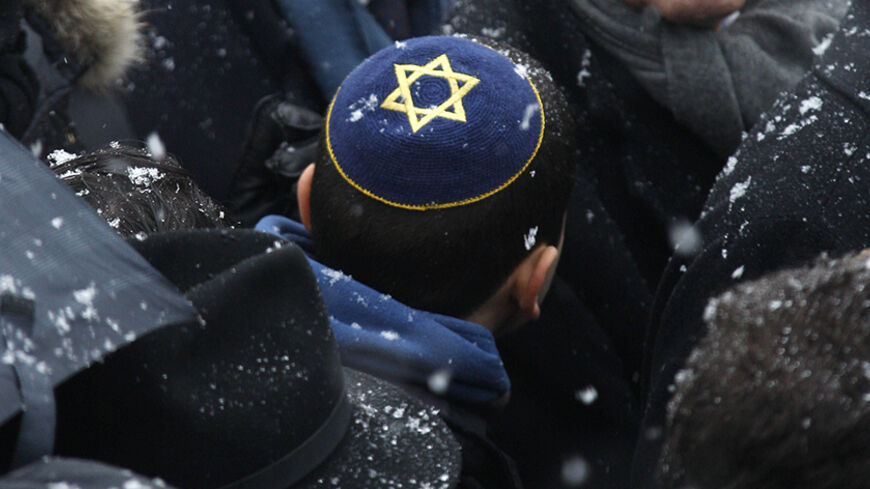 Pro-Israel demonstrators take part in a demonstration called by the Representative Council of Jewish Institutions in France (CRIF) in front of the European Parliament in Strasbourg, Jan. 14, 2009. - REUTERS/Vincent Kessler

“I reached the conclusion that if I don’t do it now, it will never happen,” says Sharon, a man in his 40s who lives in the center of Israel. “I don’t see hope for this country. I never felt that I belonged and now it’s more than ever. I have had it with this place.”

Sharon plans to leave Israel and emigrate to Europe — Spain, to be exact. He plans to start a business somewhere peaceful and calm, where he can live his life, “instead of sacrificing this one and only life for politicians,” as he says.

Newsweek magazine devoted the cover of its July 29 issue to an article describing the flow of Jews out of Europe under the headline “Exodus.” Israelis look to Europe with hope, not despair, especially at a time of war. Ashkenazi Jews, or Jews of Eastern European origin, seek ways to obtain citizenship in Poland, Hungary and Germany, while Mizrahi Jews, or Jews of Middle Eastern origin, seek Spanish or French citizenship.

“There is definitely an increase in the number of applicants in the last month. There’s always an increase in the number of applications at times of crisis,” says attorney Dan Assan, who specializes in obtaining German and Austrian citizenship for Israeli residents. “While the increase right now isn’t dramatic, we’re talking about an increase of several dozen percentages, but this is the immediate effect of war. The decision to emigrate from the country and to start a complicated process of obtaining foreign citizenship is long and complex. It could be that we will see the real impact of the war in Gaza on Israeli migration to Europe only a long time from now.”

Attorney Julie Daniel, who deals with acquiring French citizenship, claims that applications for foreign citizenship have been rising steadily and continuously, not just in a time of war. She says, “In the last month I heard from 46 families, most of them from southern Israel, of Tunisian or Algerian background. Each family consists of around 20 people.” Last year, she says, she renewed citizenship for about a hundred Israeli families.

A December 2012 article in the Israeli daily Haaretz claimed that 37% of Israelis were then considering migrating from Israel. The article mentioned a study conducted at Tel Aviv University, according to which in 2007 more than 100,000 Israelis held European citizenship — an increase of 100% since 2000. In a March 2013 article in the Israeli economic daily The Marker, the number of holders of European citizenship was estimated at 150,000. “Maybe it’s not politically correct to say so, but the Ashkenazim, who were once represented by the country, have come to be only a sector [within the population],” researcher and lecturer Noam Manella was quoted in Haaretz. “Many Ashkenazim joke that ‘we have become an insignificant minority,’ and thus people ask themselves, what connects me to this place?”

Not much has changed since then. On Aug. 4, Yossi Nehushtan, a law professor at Keele University in England, wrote in Haaretz, “The humanistic liberals must find a normal reality in a normal country, to migrate from Israel, and to create a more secure and less Israeli future for their children. Sometimes the brave solution is not to fight a losing battle, but simply to get up and leave.”

This was written during the war in Gaza, when the political left in Israel has felt especially under attack. Some leftists find it hard to identify with the national unity that supports continuing the war in Gaza, and are shocked at the indifference shown, according to them, by most of the Israeli mainstream toward what is happening in Gaza. In addition, the rise in what many leftists call “fascist right-wing terrorism” causes them to feel that they have no future in this country. In view of the aggression against leftists, calls to bring them to justice and actual physical violence, many feel that the country will soon spit them out, and that they need to find another place to live.

These people are not concerned by the grave claims presented in Newsweek and its description of an anti-Semitic incident: “It was a scene from Europe in the 1930s — except this was eastern Paris on the evening of July 13th, 2014.” The magazine, though exaggerating, describes how demonstrations against the operation in Gaza essentially turned into anti-Semitic demonstrations that have brought about a sort of Palestinian “intifada” in Europe. It further describes cries of “death to the Jews” at demonstrations and attacks on Jews and Jewish-owned businesses in France, Belgium and Germany.

The article also cites a survey conducted by the European Union in 2013, which shows that nearly 30% of European Jews are considering emigrating from the continent because of a sense of insecurity. According to the article, Jews are dealing with “insults, discrimination and physical violence, which despite concerted efforts by both the EU and its member states, shows no signs of fading into the past.”

Israeli singer Chava Alberstein caught the essence of this feeling in her 1986 album "Migrants:"

They run away from drought or hunger

They run away from unjustified hatred / Sometimes they are chased away

They think, what I don’t have here / I’ll have there.”

These incidents have not slowed the stream of Israeli applications for European citizenship. At the French Consulate in Israel, they say that while in recent years there’s been a migration of Jews from France to Israel because of growing anti-Semitism, in the last few weeks they have sensed an interesting phenomenon: The start of the war prompted a sharp increase in Israeli applications for French citizenship or French passports.

Perhaps this is true. In March 2013, The Marker published another article stating that “the number of Israeli migrants has declined in recent years by 30%.” It may be that obtaining foreign citizenship, as Assan notes, does not mean actual emigration.

While Newsweek describes a reality in which Jews can’t live in Europe, Israelis still think they have a more secure future there than in Israel. In the forum “moving to Europe” on the Israeli website Tapuz, activity has been lively in the last month. The forum administrator, who maintains anonymity and calls herself “forglemmigej,” notes there hasn't been any unusual activity in the last month. According to her, most of those who visit the forum already have European citizenship. Those with citizenship, as well as those who lack it, wish to consult with each other. For example, a participant in the forum who commented under the name “Amiris” wrote: “I’m 24, have a BA in business administration, and seek to move to live abroad … with preference for Europe … I don’t have foreign citizenship, so this seems a bit difficult. In which country would it be easier for me?”

Sharon notes that his attempts to emigrate seem even more justified now, with the security situation. “People here aren’t normal, and the war proves that they continue not to be normal. Everyone has become friends because of the war, and tomorrow they’ll hate each other again. My friend participated in a left-wing protest and right-wing activists attacked him. They sprayed pepper spray in his eyes. He is such a nonviolent person and he was really scared by it. The next assassination here will be of a leftist, it’s clear. Nothing here is proportional, everything is crazy. It’s not a place you can live in — it’s a place where you can only survive. Will I actually emigrate? I can’t say it will happen for sure, but I’m making all the efforts. The goal is to get away from here. Now I’m seriously working on it like I haven’t worked on it in the past.”

Still, he admits that the dream to move to Europe has gnawed at him for many years, and has not suddenly arisen only because of the latest war.